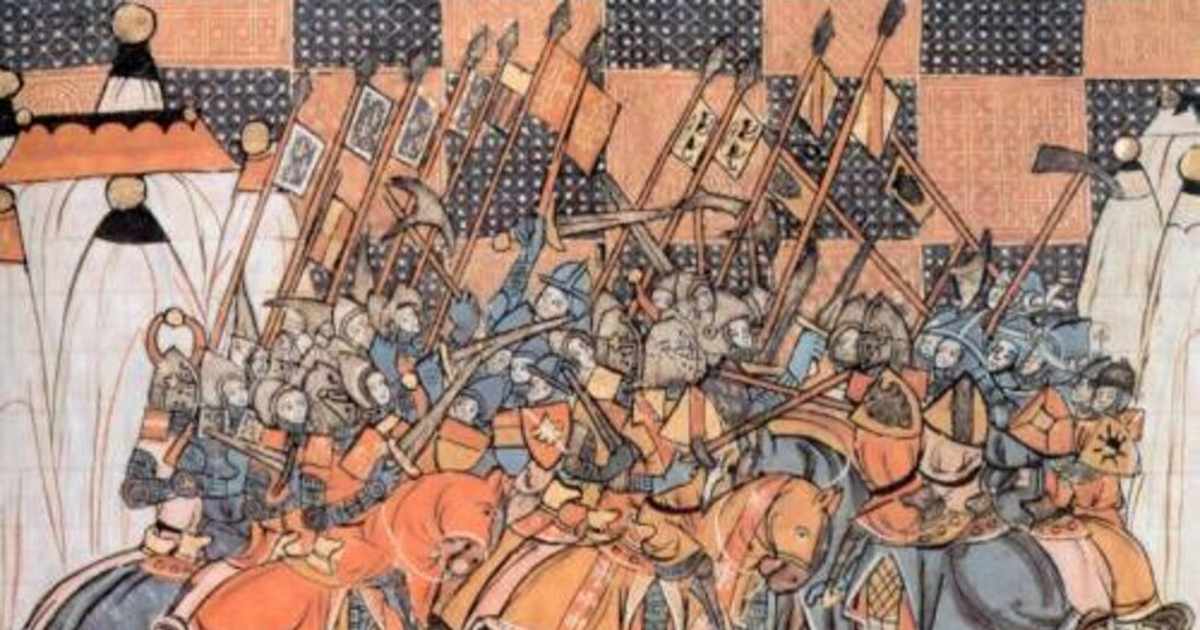 It had been two years since the First Crusade was called, and Europe’s Christians, led by the Franks and Normans, were deep in Asia Minor. They had already achieved their first victory, by liberating Nicaea (where the Nicaean Creed, which most Christians still profess today, was formulated in 325). The much more numerous Muslims, led by the Turks, were outraged at having lost the ancient city. Thus, once the Crusaders set off on the long road to Jerusalem, their foes laid in ambush for them.


They got their chance at Dorylaeum, where the Crusader army divided its forces to better forage during their march. On July 1, 1097, one of the smaller contingents beheld some thirty thousand mounted Muslims flying towards them while “shrieking heaven knows what barbarisms in loud voices,” writes a contemporary. Along with these hysterical cries of “Allahu Akbar,” which “seemed to rise to the skies,” was the “clang of armor, the neighing of horses, the trumpet’s blast,” and “the awe-inspiring roll of the drum”—all of which “struck terror to the hearts of the [Christian] legions, unaccustomed as they were to such a scene.”

Intent on annihilating the insolent infidels, the Turks let loose a torrent of arrows, killing hundreds. On getting closer, they targeted the weak and even “slaughtered mothers with their children.” Bohemond, the Norman warlord heading this besieged contingent, instantly dispatched a quick rider to inform the other leaders that “what they want is now here: come quickly.” Duke Godfrey of Bouillon and his men were first to the rescue; they “wondered where in the world such an infinite number of people had come from. Turks, Arabs, and Saracens stood out among the others.”

The Duke and other leaders exhorted their men to fear only God, not “this pile of husks,” whereupon “the Christians with unwonted energy made a furious attack upon the foe with swords.” Even as they “pressed and pursued the Turkish battle line”—and despite the “carnage” created among the Muslims—“like the regenerating heads of the Hydra, where a few fell, countless others took their place.” After much bloodshed on both sides, Christian heavy cavalry charges eventually “broke up the battle lines of the infidels and put them to flight with dreadful slaughter.”

Mark Kelly Says Lawmakers Shouldn’t Use Their Offices for Profit. He May Have Done Just That.

It was a costly Crusader victory. In the gory aftermath, four thousand Christians were massacred. As for the Muslims, about three thousand were killed, “including Arabs, Turks, [and] Persians,” before they retreated.

Not only was Dorylaeum the first pitched battle between the Crusaders and Turks; it was also where the Europeans first truly experienced the Turkic way of war. Unlike their heavily armored Christian counterparts, the Turkish army consisted primarily of light cavalry. It would gallop around, always avoiding what the Crusaders sought and excelled at— cavalry charges and close combat—and let fly volley after volley of arrows (regularly described in both Muslim and Christian sources as blotting out the sun) that would kill or incapacitate their enemy (sources tell of Crusaders looking like “hedgehogs” or found dead with forty arrows protruding). Finally, when the time was right, the Turkish horsemen would go for the kill, that is, when their enemy’s army was disunited.

The chronicler, William of Tyre (b. 1130), offers a succinct summary of the Turkish way of war which dominated most encounters between Turks and Europeans, including before and after the First Crusade (e.g., Manzikert, 1071; Hattin, 1187): The Turks, he writes, would “let fly a shower of arrows which filled the air like hail…. The first shower had barely ceased when another no less dense followed. From this no one who had haply escaped from the former attack emerged unscathed.” Then, whenever the Crusaders charged, the Turks “purposely opened their ranks to avoid the clash, and the Christians, finding no one to oppose them, had to fall back deceived. Then…the Turks again closed their lines and again sent forth showers of arrows like rain.”


After Dorylaeum, the Crusaders marched largely unopposed for three months. Rather than confront them again, the Turks turned to more ignoble tactics. “We have defeated the Christian armies and deprived them of all desire for combat,” they told other Muslim-controlled fortresses on the Crusaders’ route: “Therefore let us into your cities, and welcome gratefully those who go to such lengths to protect you.” Once inside, they “stripped the churches,” plundered whatever was valuable, and “abducted the sons of Christians as slaves, and consigned to the flames other things that were less useful, constantly in fear of our [men] coming up behind them.”

This article was abstracted from Raymond Ibrahim’s new book, Defenders of the West: The Christian Heroes Who Stood Against Islam.

ABC guest claims anyone who’s pissed about the FBI’s raid on Trump’s home is...