The European Central Bank was unable to react to soaring inflation by raising rates as early as many policymakers wanted because of a commitment to forward guidance that it has now ditched after nine years, according to people involved in the decision.

The ECB surprised many economists by raising interest rates for the first time in over a decade by half a percentage point on Thursday, despite having guided until recently that it intended a move of only half that size.

Two of the bank’s governing council members told the Financial Times they believed it would have raised rates at least a month earlier if they had not been bound by guidance that rates would not rise until it stopped buying more bonds in early July.

“A reasonable number of people on the council wanted to do 25 basis points in June,” said one ECB rate-setter. “Locking ourselves into forward guidance was unhelpful in that respect.” A second council member said the benefit of a June increase was outweighed by “the loss of credibility” that would have resulted from breaking its guidance on the timing of when asset purchases would end, adding: “It tied our hands.”

The insights underline how central banks are struggling to provide reliable guidance on their monetary policy plans after being caught out by the rapid surge in inflation to 40-year highs. In addition, the ECB is grappling with a European energy crisis and political instability in Italy.

“Forward guidance has definitely overstayed its welcome,” said Spyros Andreopoulos, senior Europe economist at French bank BNP Paribas. “They kept being surprised by the data, which affected their credibility.”

An ECB spokesperson said the council’s June meeting in Amsterdam gave “unanimous” support to leaving rates unchanged and saying it intended to do a 25 basis point rise in July, with a bigger move likely in September.

ECB president Christine Lagarde said on Thursday that it had ditched its previous guidance on the size of future rate rises after “front-loading” its exit from negative rates and was now shifting to a “meeting-by-meeting” approach to setting borrowing costs.

“We are much more flexible; in that we are not offering forward guidance of any kind,” she said. “From now on we will make our monetary policy decisions on a data-dependent basis, [we] will operate month by month and step by step.”

The decision to ditch forward guidance on rates, which has been an important part of the policy toolkit since its introduction by former ECB chief Mario Draghi in 2013, was broadly welcomed by analysts — even if some were still irritated by how the central bank broke its last stated commitments.

“No guidance is better than bad guidance,” said Marco Valli, chief European economist at Italian bank UniCredit. “This will probably raise volatility in rate-hike expectations as markets try to understand the ECB’s reaction function at a time of elevated, supply-driven inflation and substantial weakening of economic activity.”

The ECB is the latest central bank to question the value of providing guidance. The US Federal Reserve last month abandoned its heavily signalled plans for a half-point rate rise only days before announcing its first 0.75 percentage point increase since 1994 after inflation rose by more than it had expected.

Fed chair Jay Powell said after the decision that it was “very unusual” to have key data land “very close” to a rate-setting meeting, adding: “I would like to think, though, that our guidance is still credible.”

The Bank of England surprised investors last year by not raising rates when a move was widely expected in November and then raising them when it was unexpected in December.

BoE chief economist Huw Pill said earlier this month it would be “unhelpful” to provide further guidance on rates while opinion was split between its policymakers. But a few days later BoE governor Andrew Bailey said its first half-point rate rise since 1995 “will be among the choices on the table when we next meet” in early August.

ECB officials said forward guidance was most useful to signal that rates would stay low for longer once it had cut them below zero and it was buying vast amounts of bonds. “We’re moving away from that world now,” said one official.

However, Lagarde did provide some guidance on the future direction of rates on Thursday, signalling more rises ahead. “At our upcoming meetings, further normalisation of interest rates will be appropriate,” she said, adding that the central bank aimed to “progressively raise interest rates to [a] broadly neutral setting. That’s where we want to arrive at”.

Lagarde declined to estimate the neutral rate of interest — the optimal level where an economy is neither overheating nor being held back — but other council members put it between 1 and 2 per cent, meaning its deposit rate still has some way to go from zero now.

The ECB chief also ditched the word “gradual” in describing its rate-rising plans. She only used the word once in Thursday’s press conference — to describe wage growth — compared with seven times in June. 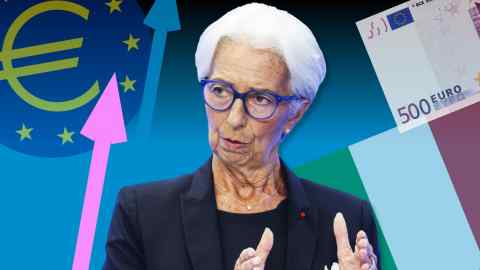 Council members criticised the concept of gradualism in June, when some said it “could be misleading if it was interpreted as implying too slow or too rigid a pace of adjustment in the monetary policy stance”, according to the minutes of last month’s meeting.

“The ECB has to come up with a new way of signalling its intention to the market,” said Ducrozet. “Otherwise it will add a layer of difficulty to predicting what they will do in the next meetings.”