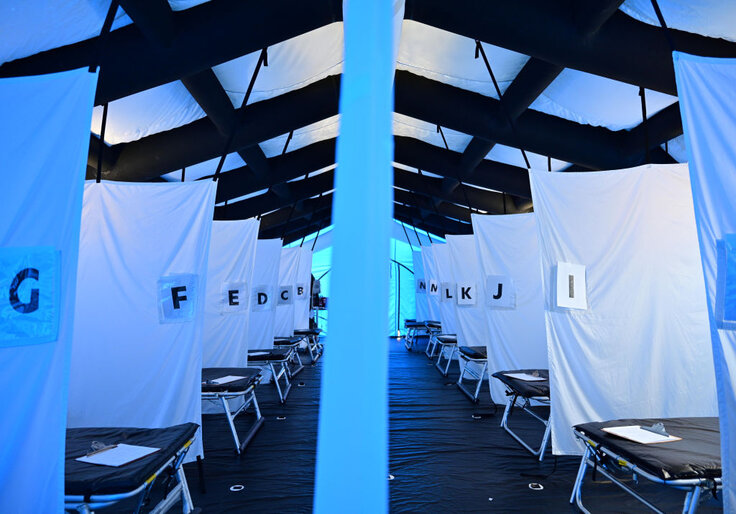 Utah public health officials were warned that allocating COVID drugs based on race violated federal law, but did so anyway with the backing of the Biden administration, emails and documents obtained by the Washington Free Beacon show.

Utah’s points-based system for prioritizing COVID patients, which allocated more points for being non-white than for having congestive heart failure, troubled two law professors specializing in bioethics. They informed the doctors who designed the system in September 2021 that it was probably illegal.

“The use of non-white race really set off alarm bells,” Teneille Brown, a professor at the University of Utah’s S.J. Quinney College of Law, said in an email.

The “consensus among legal academics,” Brown’s colleague Leslie Francis added, is that a system like Utah’s would “violate federal law.”

This piece is based on materials obtained via a third-party public records request and shared with the Free Beacon.

The doctors Brown and Francis emailed were part of the state’s Crisis Standards of Care workgroup, assembled by the Utah Hospital Association at the behest of the health department. When COVID surged in November 2020, the health department asked the group to develop a system for allocating scarce therapies. The group conceded its approach hadn’t been “reviewed legally.” But, they assured the law professors, it did have the blessing of the Biden administration.

The Department of Health and Human Services “has lauded our approach,” said Mark Shah, the director of Utah’s Disaster Medical Assistance Team and a member of the group. In February 2021, Shah’s colleague Brandon Webb presented the race-based allocation system to HHS, according to power point slides reviewed by the Free Beacon. HHS subsequently listed the system as a “promising practice” for other states to consider.

Such race-conscious policies proliferated throughout the pandemic, sparking both moral outrage and legal scrutiny. Like Utah, Minnesota and New York prioritized non-white residents for monoclonal antibodies. Vermont did the same for vaccines. Some states, including Utah and Minnesota, scrapped their policies in the wake of political backlash—and amid threats of legal action from conservative nonprofits.

The emails suggest Utah was ground zero for many of these schemes. The state initially defended its system by invoking guidance from the Food and Drug Administration, which lists race as a risk factor that can qualify patients for monoclonal antibodies. But according to the emails, it was Utah that inspired that guidance in the first place.

“The FDA reviewed our Utah Risk Score and used it as precedent for including ‘race and other risk factors’ as qualifiers,” Shah told the group in June 2021. Minnesota in turn used that precedent to justify its own allocation system.

The emails reflect the race-conscious consensus that has taken hold of medical bureaucracies across the country. As that consensus has consolidated at every level of government, it has emboldened public health officials to flout anti-discrimination law, which they assume won’t be enforced.

The gap between law and policy widened with the pandemic, which provided an emergency pretext for suspending civil rights. Nondiscrimination, the emails suggest, was seen as an obstacle to crisis management.

“I’d prefer just using the ‘we’re too busy trying to save lives during the surge’ excuse,” Webb, an infectious diseases specialist at Intermountain Healthcare, emailed his colleagues after some back and forth with the law professors.

That utilitarian mindset extended to Utah’s Republican governor Spencer Cox, who in January 2022 told health officials to modify the allocation system, a spokesperson for the governor said—but only after it became clear that the drugs weren’t reaching minorities. The problem wasn’t that the system discriminated by race; it was that the discrimination didn’t work.

“Despite the inclusion of race and ethnicity,” the spokesperson told the Free Beacon, “communities of color did not receive monoclonal antibodies proportionate to their share of COVID-test positives.”

“I’m frankly surprised that this has not yet been subject to a legal challenge,” Webb wrote the law professors. He added that in 2020, the group asked “the Office of Civil Rights” for guidance on the use of race but didn’t receive a response.

It is unclear to which office Webb was referring. A draft copy of the group’s inquiry includes no date or letterhead, and Roger Severino, HHS’s director of civil rights at the time, said it never came across his desk.

“Had this been brought to my attention,” Severino told the Free Beacon, “I would have told them they risked violating Title VI and would have merited my office investigating them had they gone through with such explicit race based rationing.”

Reached for comment, Webb said Shah was the one who sent the inquiry. Shah did not respond to a request for comment.

The group, which developed the system in November 2020, took for granted that all racial minorities should receive special treatment. It borrowed heavily from an allocation system used by the Cleveland Clinic, which prioritized African Americans for monoclonal antibodies. The “only knock” against that system, Webb wrote the group, is that “it only gives disparity weighting to black race rather than recognizing elevated risk associated with other race/ethnicities.”

Utah’s system was based on an analysis of 20,000 COVID patients between March and October 2020. Though some minorities are at higher risk than others, according to the state’s own data, the analysis lumped all of them together, comparing hospitalization rates between “white” and “non-white” Utahns.

The result was a “risk score calculator” that gave “non-white race or Hispanic/Latinx ethnicity” two points—more than it gave hypertension, chronic kidney disease, or shortness of breath. Utahns needed to score a certain number of points to be eligible for monoclonal antibodies.

The calculator was first used by the Intermountain hospital system, which employed many members of the group, including Webb and Shah. By September 2021, it was causing controversy among COVID-stricken patients.

“We have been forced into a defense of the scoring system as now constituents are reaching out to elected leaders asking why they are not eligible,” lamented Kevin McCulley, the Preparedness and Response director for the health department.

As pushback mounted, the department’s main concern was semantic rather than substantive. Officials spent days wordsmithing an online “self-screening tool” based on the calculator, in part to ensure it didn’t run afoul of progressive sensibilities.

“Latinex should have the ‘e’ removed (Latinx),” Matthew Plendl, a member of the health department, said of an early draft.

Some exchanges read like parodies of progressive racecraft, with officials attempting to sort out who would count as “non-white.”

Particularly vexing was the status of Hispanics.

“Someone with a high level of cultural competence should help us wordsmith this,” McCulley wrote his colleagues. “Is your race Non-white or Hispanic/Latinex Ethnicity? I don’t think Hispanic is a race.”

Lawyers Cause Homelessness – The American Conservative