US stocks pull back from record highs 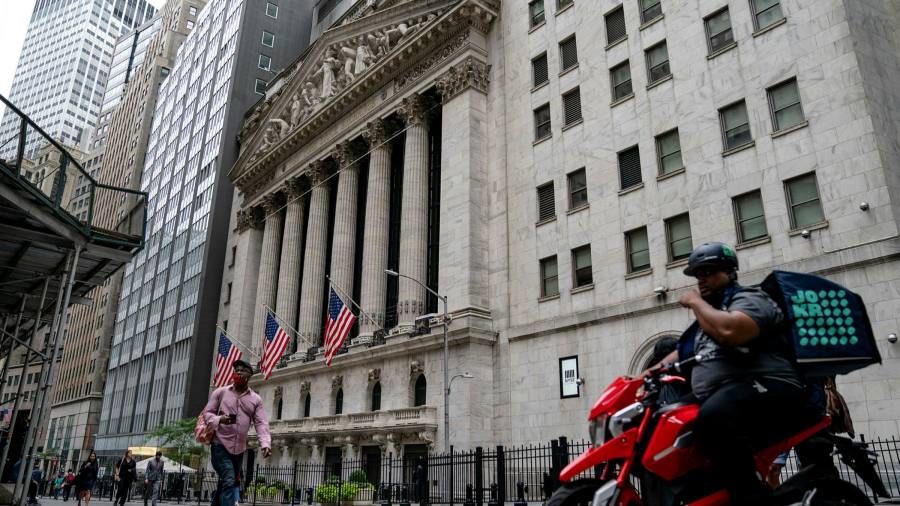 The S&P 500 slipped 0.1 per cent on Friday in New York, having logged an all-time high a day earlier.

The Nasdaq Composite dropped 0.8 per cent, weighed down by weak tech stocks. The soggy performance contrasted with a more upbeat session in Europe, where the Stoxx Europe 600 index advanced 0.5 per cent, taking its gain during October so far to almost 4 per cent.

The Stoxx 600 has now recouped all of its losses chalked up in September, when global stock markets were weighed down by stagflation fears caused by spiralling energy costs, pandemic-related supply chain disruptions and the prospect of central banks raising interest rates to combat high consumer prices.

This week, consumer goods groups Unilever and Procter & Gamble said they had managed to raise prices to pass on higher input costs to customers. After the bell on Wednesday, electric car maker Tesla posted its highest quarterly profit, helping to nudge Wall Street’s blue-chip S&P 500 index up to a closing high on Thursday.

However, Erik Knutzen, chief investment officer for multi-asset at Neuberger Berman, said he expected a potentially volatile ride ahead.

On Friday, social media platform Snap slid more than 26 per cent after warning of reduced advertising revenue. Other technology bellwethers such as Google parent Alphabet and Facebook also suffered losses, falling 3 per cent and 5.1 per cent, respectively.

“There is still a lot of worry to get past,” Knutzen said. “We are looking for lower entry points before we pile in.”

Central banks are grappling over how to respond to inflation shocks when economic growth is moderating.

Huw Pill, the Bank of England’s chief economist, told the Financial Times on Thursday that the headline rate of UK inflation could exceed 5 per cent next year, and said the central bank would have a “live” decision on whether to raise interest rates from a current record low next month.

Rates and currency markets were now “pricing in multiple rate hikes next year for the Fed, and as soon as December for the BoE”, Barclays’ Cau said.

The Federal Reserve, in its Beige Book assessment of economic conditions released earlier in the week, said a rebound in US growth from the shocks of coronavirus had now “slowed”, citing supply chain shocks, worker shortages and the continued spread of the virus.

The yield on the two-year US Treasury note, which moves inversely to its price and reflects monetary policy expectations, ended the day roughly flat at 0.46 per cent, have sold off in earlier trading.

In a sign, however, of concerns about future growth, the longer-term US government bond gained in price, pushing yields lower. The 10-year yield fell 0.06 percentage points to 1.64 per cent in afternoon trade in New York.

The dollar index, which measures the greenback against six currencies, fell 0.2 per cent as appetite for riskier assets increased. This dollar gauge touched a one-year high in September but has dropped roughly 0.7 per cent this month.

Brent crude, the oil benchmark, settled up 1.1 per cent to $85.53 a barrel, remaining close to its highest level in three years.