US consumer prices rose more than forecast in June, hitting an annual pace of 9.1 per cent, a fresh 40-year high that opens the door for the Federal Reserve to potentially raise interest rates by a full percentage point this month.

The consumer price index published by the Bureau of Labor Statistics on Wednesday further accelerated last month, above economists’ estimates for an 8.8 per cent increase. It marked the fastest year-on-year increase since November 1981.

Prices jumped another 1.3 per cent month on month in June, following a 1 per cent rise in May.

Once volatile items such as food and energy are stripped out, “core” inflation increased 0.7 per cent, compared with May’s 0.6 per cent advance. That translated to an annual increase of 5.9 per cent, roughly in line with the 6 per cent pace reported the month earlier.

“There is not much solace here,” said Michael Pond, head of global inflation-linked research at Barclays.

The data will spur the US central bank’s efforts to restore price stability, which intensified last month after officials abandoned previously-laid plans to deliver a half-point rate rise and instead implemented the first 0.75 percentage point increase since 1994.

The market move accelerated after Raphael Bostic, president of the Atlanta Fed, said “everything is in play” in response to a question about the possibility of a 1 percentage point increase.

Treasury yields also jumped, with the yield on the two-year note, which moves with interest rate expectations, reaching its highest level since late June. It steadied at 3.2 per cent.

Policymakers have signalled their intent to raise rates to a level — estimated to be about 3.5 per cent — that begins to restrain economic activity by the end of the year. They are seeking to maintain an aggressive approach to tightening monetary policy until there is evidence that monthly inflation readings are decelerating towards a pace more consistent with the Fed’s 2 per cent target.

The monthly inflation gains were “broad-based”, according to the BLS, but a 7.5 per cent increase in the energy index contributed to almost half of the jump in headline inflation. Petrol prices rose 11.2 per cent in June, while food prices were up 1 per cent. Prices for new and used vehicles continued their ascent, rising 0.7 per cent and 1.6 per cent, respectively. 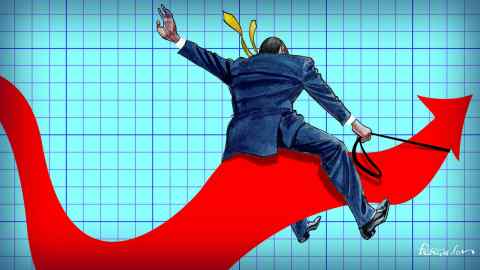 In a worrying sign, services inflation, excluding energy, climbed 0.7 per cent on a monthly basis and was up 5.5 per cent compared with the same time last year. Shelter-related costs drove a significant portion of the increase, rising 0.6 per cent for the month or 5.6 per cent on a year-over-year basis. That is the biggest annual increase since February 1991. Prices for transportation services and medical care also increased.

One outlier was airline fares, which slid 1.6 per cent following two months of double-digit growth.

‘Once you s**t in someone’s bed, you just guilty of everything’: Chris Rock roasts Amber Heard

The administration of President Joe Biden, whose popularity has plummeted against the backdrop of soaring inflation, this week sought to get ahead of June’s high figure and played down the acceleration, emphasising that the data covered a period before a sharp drop in prices for energy and other commodities.

“While today’s headline inflation reading is unacceptably high, it is also out of date,” Biden said in a statement released on Wednesday which also emphasised that price pressures were a global phenomenon. “Tackling inflation is my top priority — we need to make more progress, more quickly, in getting price increases under control.”

Brent crude, the international oil benchmark which had climbed to almost $140 a barrel in early March following Russia’s invasion of Ukraine, this month slumped below $100 a barrel. Food prices globally have also moderated from historic highs. 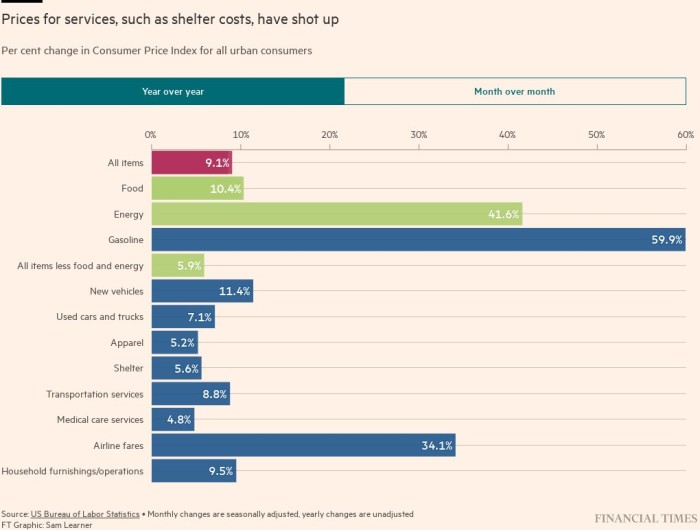 Should the Fed raise rates by another three-quarters of a percentage point at its July meeting, as expected, the target range of the federal funds rate will rise to 2.25-2.50 per cent.

He added that June’s report raised the probability of a “very hawkish response”.

Alongside its actions to tighten monetary policy, which include shrinking its $9tn balance sheet, the Fed has stepped up its rhetoric about not only its “unconditional” commitment to lowering inflation, but also what it is willing to risk in terms of the economic recovery to do so.

The Fed has begun to acknowledge unemployment will need to rise, with officials most recently forecasting joblessness to inch up from its historically low level of 3.6 per cent to just above 4 per cent by the end of 2024.

Many economists believe a more accurate estimate is in the vicinity of 5 per cent, translating to significantly more job losses.

FT survey: How are you handling higher inflation?

We are exploring the impact of rising living costs on people around the world and want to hear from readers about what you are doing to combat costs. Tell us via a short survey.

Democratic Rep. David Cicilline wants you to spare him the bulls**t about constitutional rights...