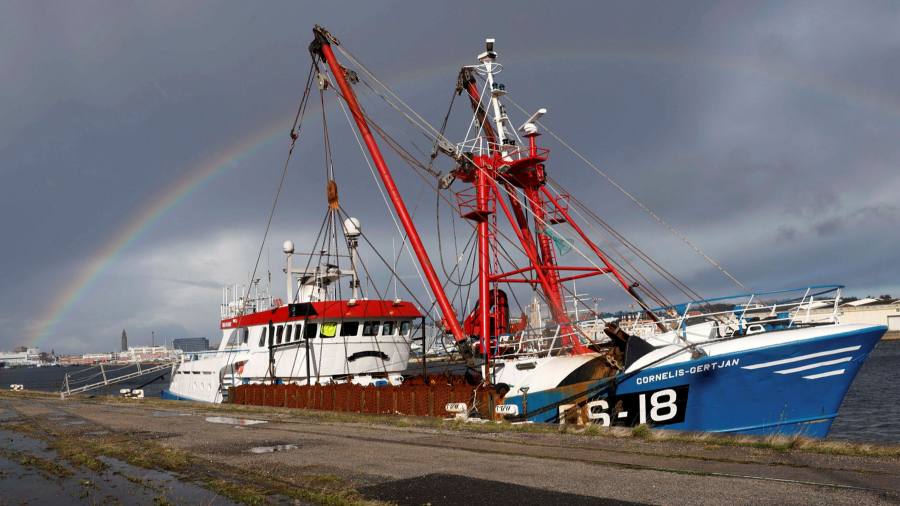 UK environment secretary George Eustice has welcomed a “big de-escalation” in the dispute between Britain and France over post-Brexit fishing rights, after Paris suspended a threatened round of sanctions against the UK while the negotiations continue.

Emmanuel Macron, France’s president, had vowed to block UK fishing boats from landing their catches at French ports and to increase checks on UK imports from Tuesday if Boris Johnson’s government did not grant it more licences.

Just hours before the midnight deadline, he said he would delay the measures to “give a chance” for the last-ditch talks, convened by the European Commission, to continue on Tuesday.

“You don’t impose sanctions while negotiations are continuing,” he said on the sidelines of the COP26 climate summit in Glasgow. “The coming hours are important. I understand the British are going to come to us with other proposals.”

Responding to the withdrawal of threats, Eustice said there had been “constructive” talks between the two sides on Monday. “It’s a big de-escalation,” he told the BBC on Tuesday. “We very much welcome the fact that France has decided not to go ahead with its threats, and we’ll continue to have those constructive discussions.”

In a further de-escalation of tensions, a British scallop trawler detained by French authorities last Thursday has been released. The Cornelis Gert Jan was forced to dock in Le Havre after being accused of illegally fishing in French waters without a licence, which the UK insisted was an administrative error.

Tensions over fishing rights have been simmering for months after the UK failed to issue permits for some small French boats to fish in British waters, a key element of the EU-UK Trade and Cooperation Agreement, or TCA.

The British insist they have refused to issue licences only to boats that have failed to prove they had fished in UK waters before Brexit, while the French argue that London is deliberately dragging out the process and targeting vessels from France.

Paris has accused the UK of issuing only half the fishing licences it is entitled to under the agreement. London argues that it has issued permits to 1,673 EU vessels — 98 per cent of all applications — to fish in its exclusive economic zone since December 31 last year.

Eustice said: “We had constructive talks yesterday where we made clear that if there are additional vessels that have got evidence and they can bring that new evidence forward, we’ll obviously consider it.”

UK prime minister Boris Johnson’s official spokesperson said the government welcomed “France’s acknowledgment that in-depth discussions are needed to resolve a range of difficulties between the UK and EU.

“We want to find consensual solutions together if we can and Lord Frost has accepted Clement Beaune’s invitation and looks forward to discussions in Paris on Thursday. They will be discussing issues including fisheries and the Northern Ireland protocol.”

But Bruno Bonnell, an En Marche MP for Villeurbanne, near Lyon, suggested the UK prime minister has been “bluffing all along”.

Speaking to BBC Radio 4’s Today programme on Tuesday, he said: “Of course he is, as usual, he’s been bluffing all along” and has been “continuously pretending that Brexit will have no impact, no effect, on the UK lifestyle”.