The risk of a slowdown in the UK housing market is growing as interest rate rises by the Bank of England, the threat of recession and soaring inflation put a squeeze on household finances, economists warned.

The BoE increased its main interest rate on Thursday by a quarter point to 1 per cent to curb price rises. It warned that inflation was likely to soar to 10.2 per cent by the fourth quarter and that the British economy would go into recession, with real incomes declining and unemployment rising.

Economists and housing market professionals said higher bills for energy, goods and services, as well as pressure from rises in both the BoE interest rate and those charged by mortgage lenders, would put the brakes on housing market growth.

“The risks to the housing market are rising. The cost of living crisis is squeezing household finances, especially for those towards the lower end of the income distribution, typically renters. Meanwhile, interest rates are rising, which will eventually feed through to higher mortgage rates and higher housing costs for mortgaged homeowners,” said Neal Hudson, director at housing market research firm Residential Analysts. 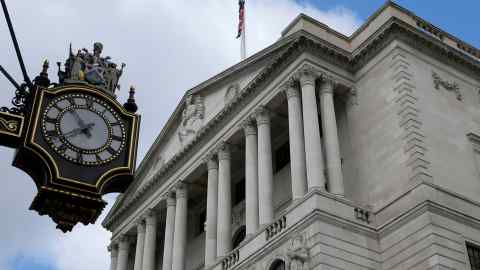 Sellers and buyers have in recent months confounded the bleak outlook for the economy, with purchasers rushing to seal house deals while mortgages remain relatively good value. Homes lender Halifax on Friday said prices in April rose by an annual 10.8 per cent, with price growth accelerating in the past two years.

House prices soared during the pandemic after the government cut stamp duty on property transactions, mortgage interest rates fell to new lows and lifestyle changes drove house moves. But economists said pressures on the housing market were now piling up.

The BoE on Thursday suggested it would not need to raise interest rates to the levels it had previously predicted, since an economic slowdown would do more of the work of driving down inflation.

But Andrew Wishart of consultancy Capital Economics said the BoE may still have to raise rates next year to 3 per cent, which would push up mortgage rates, douse buyer demand and cause house prices to fall by a total of 5 per cent in 2023 and 2024. “House price growth will slow sharply later this year,” he said.

The yen: a cheap haven for uncertain times

“Lenders are repricing their product ranges on a weekly basis, which gives borrowers very little time to act,” he said.

Most mortgaged homeowners are on fixed-rate deals that protect them from the immediate impact of rate rises. But first-time buyers, owners remortgaging, or those taking out a larger loan or holding variable rate deals are likely to face higher mortgage costs.

David Hollingworth, associate director at broker L&C Mortgages, said the rise to 1 per cent could leave borrowers on a 25-year repayment mortgage at a standard variable rate of 4.24 per cent paying an extra £756 a year. If the main interest rate went to 1.75 per cent and this was passed on, it would mean an additional £3,108.

But he added that property had been an attractive investment in times of high inflation, when the value of cash was more rapidly eroded.

“In the context of longer history, mortgage rates are still very low indeed,” he added. “I wouldn’t panic.”

America is Rejecting the Radical Left