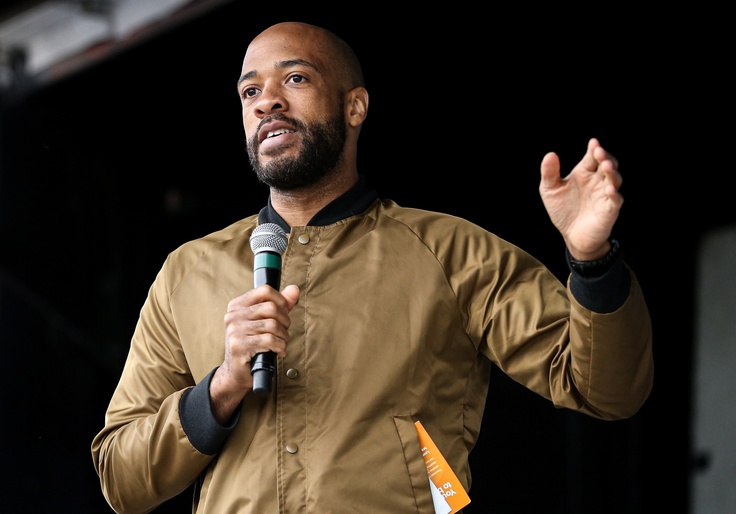 Mandela Barnes, the Wisconsin Democratic Senate candidate, has talked up his support for Israel on the campaign trail. Left unmentioned in his stump speeches is his membership, until 2019, in one of the most vocal anti-Israel groups in the state.

“I had an incredible opportunity to visit Israel 10 years ago, got to bear witness to the harsh reality of Israel’s national security,” Barnes told the Jewish Democratic Council of America forum in June, adding that he opposes the global Boycott, Divestment, and Sanctions movement (BDS) that seeks to isolate Israel.

But for years after his 2012 Israel trip, Barnes was a member of the Wisconsin chapter of Peace Action, a fringe anti-war group that has promoted boycotts of the Jewish state, defended Palestinian terrorist groups, and lobbied the U.S. government to open diplomatic ties with Iran and North Korea.

His work with the group raises questions about his stance on Israel—which has shifted during his Senate campaign—and is likely to increase scrutiny into his far-left foreign policy positions as he faces off against incumbent Republican senator Ron Johnson in the competitive race.

During Barnes’s first year as a state representative in 2013, he listed himself as a member of Peace Action Wisconsin in the “Blue Book,” the state government’s official handbook that includes legislator biographies.

“He used to come here and sit at our meeting table and be part of our meetings,” Pam Richard, Peace Action Wisconsin’s office manager, told the Washington Free Beacon on Tuesday.

She said Barnes’s involvement ended around the time he became Wisconsin lieutenant governor in 2019. He has appeared to distance himself from the group since then.

Barnes skipped Peace Action Wisconsin’s “WI Senate Candidate Peace Forum” in July—which featured several of his long-shot former primary competitors—but told the organization that he would send a recording responding to its questions.

Richard said she is still waiting for Barnes to send his answers.

“He hasn’t sent it yet,” said Richard. “We’re kind of frustrated but I just have to wait for him to be ready to do it.”

Barnes’s campaign spokeswoman declined to comment on his membership in Peace Action Wisconsin, and referred the Free Beacon to “his on the record positions on the policy issues you reference.”

Barnes has appeared to shift his position on Israel during the course of the campaign. Last year, he indicated that he would oppose military assistance to Israel if it didn’t abide by certain conditions, which he declined to specify. But he appeared to walk back these comments in June, saying he would have voted to fund Israel’s missile defense system.

“Israel needs to be able to defend itself. And I don’t support movements that would deny that, like BDS,” Barnes said in June.

Peace Action Wisconsin has a long history of promoting boycotts of Israel. Since July, the group has posted calls to boycott Pillsbury and Hyundai for their work in the Jewish state. Earlier this month, the group published a press release on its website from Samidoun, a designated terrorist group in Israel.

Mom takes the CDC and their original COVID restrictions APART reminding them what they did to Americans to ‘protect us’ in SAVAGE thread – twitchy.com

The statement called for “resistance in all forms” and a “campaign to isolate the Israeli regime at all levels, including through boycott.” It also condemned Israel’s assassination of a military leader of the Palestinian Islamic Jihad—a U.S.-designated terrorist group funded by Iran—and described him as one of the “martyrs of the Palestinian cause.”

Peace Action Wisconsin’s anti-Israel activism was the subject of media attention before Barnes joined. The group organized a protest of the local Jewish Community Center’s Israeli Independence Day celebration in Milwaukee in 2008, according to the Jewish Telegraphic Agency.

The next year, Peace Action Wisconsin sponsored a conference at the University of Wisconsin-Milwaukee that promoted “boycott and divestment as tools to work toward equality for [P]alestinians.”

One of the speakers was the American-Arab Anti-Discrimination Committee’s Bob Ashmore, who told the audience that “Israel should be destroyed as a Jewish state just as South Africa was destroyed as an apartheid state,” according to the Jewish Chronicle.

In 2014, Barnes was photographed attending the group’s Lanterns for Peace event, a vigil for victims of the U.S. nuclear bombings of Hiroshima and Nagasaki. Lanterns at the event featured slogans such as “Stop Supporting Israel.”

The most recent Peace Action Wisconsin event Barnes is listed as attending is a June 2019 potluck dinner, which protested U.S. travel and economic restrictions in Cuba.

At the time, Peace Action Wisconsin was lobbying state lawmakers to “repeal Wisconsin’s Anti-BDS Law,” which prohibited state funding from going to companies that boycott Israel. The group compared the BDS movement to Rosa Parks’s Montgomery bus boycott, and told its supporters to “contact your state legislator to urge them to repeal this unconstitutional law” in its June 2019 newsletter.

One month prior, Peace Action Wisconsin defended Minnesota Democratic congresswoman Ilhan Omar’s claim that U.S. support for Israel is “all about the Benjamins baby,” which was widely denounced as anti-Semitic by Omar’s own party.

“Ilhan Omar spoke the truth about the influence of [the American Israel Public Affairs Committee] and the state of Israel on United States elected officials,” said Peace Action Wisconsin’s May 2019 newsletter.

Two months before the event with Barnes, the group also hosted a film screening of The Occupation of the American Mind, a documentary that claims “the U.S. government and the pro-Israel lobby” are colluding to “shape American media coverage of the Israeli-Palestinian conflict in Israel’s favor.”

Rep. Eric Swalwell has a warning for those who have ‘been aboard the Trump...