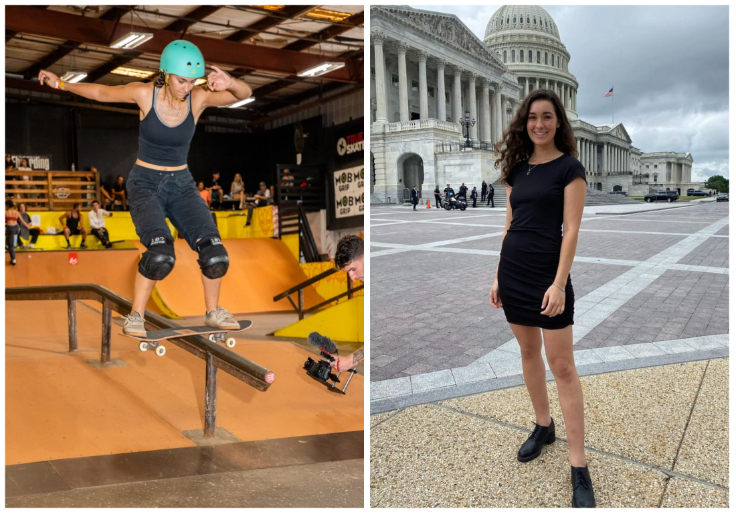 Taylor Silverman is grateful for all the anti-Semitic Instagram comments.

The 27-year-old amateur skateboarder made waves earlier this year when she spoke out against biological men participating in women’s sports. A self-described Zionist who is rarely photographed without a Star of David necklace, Silverman wasn’t surprised that online backlash quickly turned anti-Semitic. But she’s a little surprised by how much of it came from her friends.

“If I hadn’t spoken up, I would still be friends with people who are blatantly, and proudly, anti-Semitic,” Silverman tells the Washington Free Beacon. “I’m grateful I did, because it showed which of my old friends are anti-Semitic pieces of trash.”

The friendly fire was only part of the backlash Silverman faced for speaking publicly about her experience competing against transgender athletes. It wasn’t a political protest. Silverman had been skating for a decade, and only just began to feel that the skateboarding community was making space for women. But as soon as the community began to take shape, she felt it come under attack.

“The first time I lost to a trans man, I thought people would recognize it was unfair and speak out. The second time, I thought, ‘Someone has got to do something about this!’ The third time, I realized: I am somebody. And so, I spoke up.”

In a May 11 Instagram post, Silverman recounted losing first place in the 2021 Red Bull Cornerstone Contest to Lillian Gallagher, only the latest instance where she had gone up against transgender competitors.

“I am sick of being bullied into silence,” Silverman wrote in the post, which also included a screenshot of a concerned email she sent to Red Bull. “A biological man with a clear advantage won the women’s division,” Silverman wrote to Red Bull sports marketing manager Erich Drummer. “This took away the opportunity that was meant for women to place and earn money.”

Red Bull never responded to her email. But the trolls did.

“This argument is transphobic as fuck and shows what type of person you are,” one commenter wrote. “Hopefully you give up on life soon since you’re bad at everything,” added another.

Soon, the hateful comments began popping up on Silverman’s other posts.

“Taylor the type of girl to rat someone out at the camps just to get some extra bread,” reads one comment on a photo of Silverman at the Dead Sea, an apparent reference to the Holocaust. “It’s chill I can say this too I’m an actual Jew not some token ass white girl,” the commenter added.

Silverman’s Instagram feed is an object lesson in what happens to those who take the unpopular position on hot-button issues. The comments beneath her photos are a minefield of the left’s choice insults: “transphobe” and “TERF,” “colonist” and “Free Palestine!” As Silverman sees it, most of the vitriol comes from the same place.

“It’s anti-Semitism and misogyny disguised as some kind of social justice,” she says. “They’re just going with the latest trendy word to get away with hateful shit.”

Silverman is no stranger to being attacked for her faith. The anti-Semitism she faced in the classroom was one of the things that motivated her to complete high school at home. During the pandemic, she left her skating team after teammates sent her videos of Hitler and told her Jews “deserved” anti-Semitism. Going solo meant losing out on free gear and help with travel and competition expenses. But that hasn’t slowed her down one bit.

In fact, Silverman travels so much these days that she never knows what to say when people ask her where she lives. But whenever she can, she gets back to her hometown of Kalamazoo, Mich. It was there, as a newly minted, 16-year-old homeschool kid who missed playing sports, that Silverman first picked up a skateboard. It’s where she learned to ollie, and where she entered her first skating competition.

It’s also where she learned firsthand that the skating community isn’t always the safest place for young women. As a novice, Silverman says she “was treated horrifically” by male skaters and “faced everything from bullying to sexual assault at the skatepark.” When she first started entering local competitions, they often didn’t have separate contests for women. It was only after she started winning, and traveling to bigger events around the country, that she began to meet and befriend other female skaters.

“It was exciting to me when there were women’s divisions, and girls were showing up,” Silverman says, recalling the excitement she felt at the chance to “meet and hang out with women who were passionate about the same things as me.”

Not Quite Her Majesty’s Service

It was a desire to protect this community that led Silverman to speak out—and landed her in the middle of one the most controversial issues of the day. The NCAA came under fire for its decision to let male-to-female transgender athletes participate in women’s sports after University of Pennsylvania swimmer Lia Thomas—who swam in the men’s division until 2019—began competing as a woman. In recent months, the International Rugby League and the International Swimming Federation have barred transgender athletes from participating in women’s events.

In many ways, skateboarding is more gender-blind than other sports where transgender athletes have become a flashpoint. It’s one of Silverman’s favorite things about the sport. Anyone from anywhere can pick up a board and go, no matter their race, age, or gender. But, as Silverman is quick to point out, that doesn’t change the fact that transgender athletes have a competitive advantage.

She points to studies that show male-to-female transgender athletes remain faster and stronger than their peers even after undergoing hormone therapy. And she can rattle off the physical differences that give male skaters a competitive advantage: They have higher centers of gravity, denser bones, and carry less body fat than women.

But while Silverman is certainly concerned with how gender affects competitive fairness, her fight isn’t about titles or prize money. It’s about empowering young girls.

“Skateboarding has been male dominated for so long, it’s intimidating for girls,” Silverman says. Women’s divisions offer aspiring female skaters a chance to practice their skills away from the “pretty misogynistic” skateboarding culture. If girls feel like there’s no place for them in the skating community, Silverman says, they simply won’t show up.

Her fight could soon take on greater urgency. In June, the Biden administration proposed changes to Title IX that would allow students to participate in school events based on their assumed gender identity, rather than biological sex. Critics of the proposal say that the changes cut against the core of Title IX, which was meant to boost women’s equality.

Like many critics of these rule changes, Silverman is particularly frustrated with female athletes who are pushing to upend women’s sports in the name of progress.

“The people who are advocating for this, I don’t think women’s feelings or safety is on their radar at all. I don’t think they care about us at all,” she told the Free Beacon. “The women who advocate for this, I think they’ve lost touch with any kind of feminism, and it’ll come back to bite them in the ass one day. Hopefully they realize they’re giving up their own rights, and their daughters’ rights.”

Even though this issue is making waves in Washington, Silverman doesn’t see herself as a partisan warrior. “This isn’t a political issue,” she says. “It’s a commonsense issue.”

Silverman makes it abundantly clear that she doesn’t see her position as “anti-trans” but as “pro-woman.” She doesn’t care if skate competitions have open divisions where people of all genders can compete against each other, nor would she mind if there were dedicated divisions for transgender skaters. She doesn’t relish the fight—she just wants a solution.

Though she admits it’s been an “overwhelming” month of media exposure and online harassment, Silverman has no trouble seeing the good in her experience. Marveling that she’s spent the past month “touring around the country fighting for women,” she sounds like she just won the lottery. Whether she’s talking about the inspiring people she’s met or recounting tales of online harassment, her optimism never seems to waver.

It’s not the demeanor you’d expect from someone who’s been tossed into the fray. But to Silverman, it’s the only way to stay sane.

“A really good way to cope with the craziness we’re going through,” she says, reflecting on our present moment, “is to laugh.”

Try not to get bowled over by the #science as Dr. Deborah Birx does...

World Gov Peril: Biden Agreement May Give the WHO Control Over Your Life and...