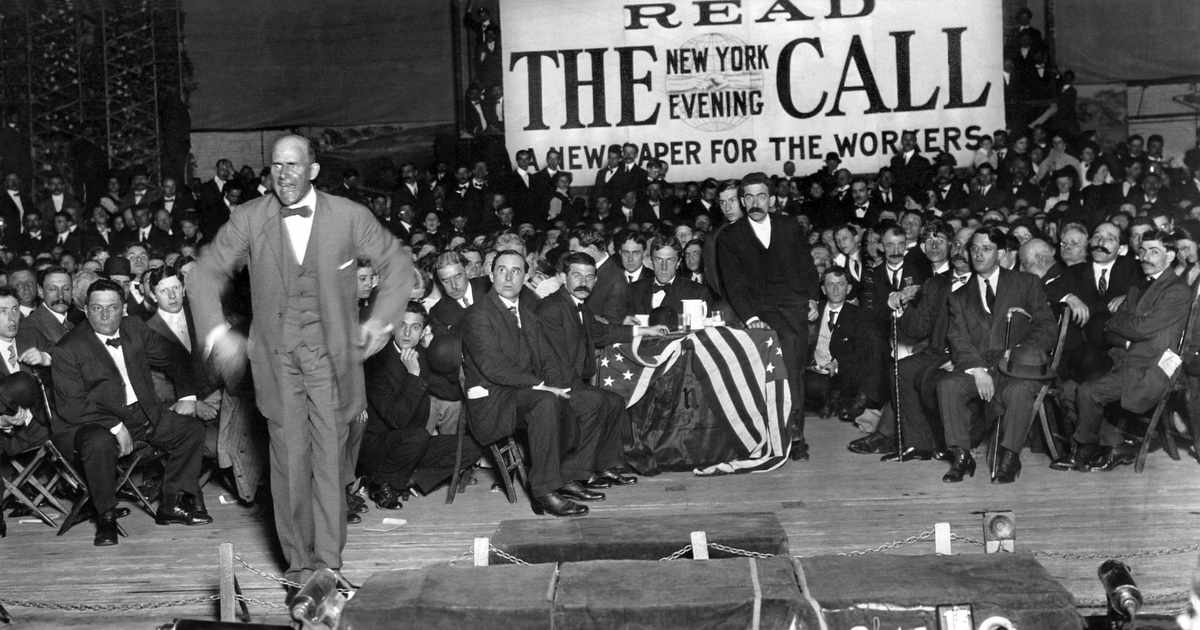 Whoever thought Republicans would say, “Thank you, Eugene V. Debs”? Who? Debs, who ran for president five times, beginning in 1900 with a run against William McKinley, was the father of the socialist political movement in the United States. In fact, his 1920 run was unusual in two ways. First, he got the all-time high vote total for a Socialist candidate: 913,693 votes. Second, his campaign slogan was  “Vote For President Convict No. 9653.”

Sorry, Trump haters and all you people citing penalties under U.S. Code § 2071: “and [he] shall forfeit his office and be disqualified from holding any office under the United States.” None of this applies to candidates for president. Even if some evil genie gave Merrick Garland and Joe Biden three wishes and they asked that the Trumpster be locked up and the key buried at the bottom of the sea, it would be meaningless. The Dapper Donald could still be elected president of the United States. Later courts have affirmed this right of voters, specifically citing the Debs case. The swearing-in ceremony might be awkward, but how sweet the signing of the pardon would be. And the flood of liberals’ tears would be enough to make Death Valley bloom.

Debs, something of a socialist crank, was known as a jolly good fellow by the warden, guards, and prisoners. He was imprisoned under Woodrow Wilson’s Espionage act, the same type of charge being used by Attorney General Merrick Garland to go after Trump. Debs was convicted for giving an anti-war speech in Canton, Ohio, urging non-compliance with the World War I draft in 1917. His sedition case made its way through the courts, ending up on the Supreme Court docket.


There, the progressive “Yankee from Olympus,” Justice Oliver Wendell Holmes, Jr., wrote the unanimous opinion affirming Deb’s ten-year prison sentence. Social critic H.L. Mencken later said that Holmes was “no more than an advocate of the rights of law-makers.” Even after World War I ended, progressive President Wilson refused to pardon the perennial socialist gadfly Debs, demonstrating once again how progressives and free speech mix as easily as oil and water.

While not a religious man, Debs must have been happy when on Christmas Day, the great president who first put the roar in the Roaring Twenties, Republican Warren G. Harding, pardoned him.

The bottom line is that to run for president, you must be 35 years of age and a natural-born citizen of the United States. The candidate does not even need to be a registered voter. Or, as New York’s governor might put it, even an “incarcerated person” can be elected. (Crazy Gov. Hochul has just banned the use of the word “inmate” in the New York justice system!)  Political junkies, take note that Debs’ vote count went up when they imprisoned him, just as Donald Trump’s poll numbers are rising with the Department of Justice again trying to convict him.


Clearly, Merrick Garlands’s invocation of the federal espionage and document retention acts provides as much genuine legal cover for this looney raid as the two-inch wide mawashi worn by sumo wrestlers covers their backsides. And the Justice Department has a lot of backside to cover in this whole Keystone Cop escapade. To believe that the declassifier in chief, the President of the United States, can be charged with having documents in his possession that were classified by someone under him in the chain of command is a sin against common sense.

Related: Another Huge Red Flag in the Trump Raid Story

We will see how it plays out, but as a reminder that everything old is new again, I will quote Heywood Broun, a noted agnostic writer who Bishop Fulton J. Sheen would later convert and baptize. He wrote of Debs (Twitter take note):

I imagine that now it would be difficult to find many to defend the jailing of Debs. But at the time of the trial he received little support outside the radical ranks. The problem involved was not simple. I hated the thing they did to Debs even at the time, and I was not then a pacifist… Free speech is about as good a cause as the world has ever known. But, like the poor, it is always with us and gets shoved aside in favor of things which seem at some given moment more vital. They never are more vital. Not when you look back at them from a distance. When the necessity of free speech is most important we shut it off. Everybody favors free speech in the slack moments when no axes are being ground.

How I Triggered Progressives With One Satirical Tweet – RedState

Paul Krugman’s 2020 hot take on what the Biden economy would bring is coming...

Time for Trump to Back up His Governor Endorsement in Michigan...