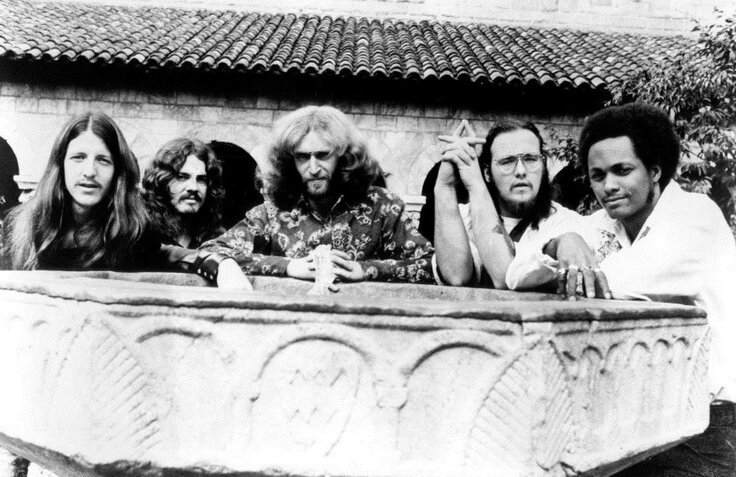 If Donald Rumsfeld were a rock critic, he might have observed that there are bands you know, bands you don’t know, and bands you don’t know you know. For many people, the Doobie Brothers fall into that third category. If you’ve listened to oldies or classic rock or even easy listening stations over the past 30 years, you may like multiple songs of theirs but not even realize that they’re by the same band. That’s because the Doobies pulled off one of the most remarkable second acts in rock.

In Long Train Runnin’: Our Story of The Doobie Brothers, two of the band’s founding members—Tom Johnston and Pat Simmons, joined by music journalist Chris Epting—set out to tell the band’s saga, from its formation and transformation, its breakup, reunion, and continued touring.

The Doobie Brothers formed in Northern California in 1970, when Johnston and Simmons were introduced by a mutual musical hero, Skip Spence of the psychedelic rock band Moby Grape. Simmons and Johnston had different musical styles but recognized each other’s talents immediately. Simmons’s guitar picking created a country feel that balanced Johnston’s heavier, blues-based approach. Initially a four-member band, the Doobie Brothers—so named because, unlike their peers, they smoked a lot of weed—played shows around San Francisco, including many at a rowdy club frequented by bohemians, cowboys, and bikers, before releasing their debut album with Warner Bros. in 1971.

Over the next several years, they enjoyed chart success with a handful of what are now classic-rock staples, including “Listen to the Music,” “Long Train Runnin’,” “China Grove,” and “Jesus is Just Alright.” Johnston sang lead on all of those, backed by his heavily harmonizing bandmates. Even people who know the Doobies from these songs probably underestimate the band’s versatility and musicianship, as well as the overall quality of their albums. One exceptional track from the band’s early years, “South City Midnight Lady,” features Jeff “Skunk” Baxter (he of the remarkable mustache and missile-defense expertise) on a pedal steel guitar that blends subtly with a backing synthesizer. Baxter would play pedal steel for Steely Dan later that year on “Pearl of the Quarter,” and in what may be a surprise to rock snobs everywhere, the Doobies’ song is more interesting.

Ironically, it was Simmons, not Johnston, who sang lead on the band’s first chart-topper. In 1974, producer Ted Templeman (who later produced Van Halen’s best albums) used one of Simmons’s songs as a B-side to “Another Park, Another Sunday” so that Simmons would receive songwriting royalties. But a D.J. in Roanoke, Virginia, decided to play the song as an homage to the nearby Blackwater River. By March 1975, “Black Water” had coursed to #1 on the charts. The Star City of the South made a NoCal band’s homage to New Orleans a national hit. Only in America!

Weeks after this success, while touring for their new album, the band suffered a crisis: Johnston’s hard living aggravated a stomach ulcer so seriously that he couldn’t perform. Baxter recruited Michael McDonald, a backing vocalist he knew from his days in Steely Dan, to fill in for Johnston on the tour. Not quite a Wally Pipp/Lou Gehrig situation, but close.

On their next album, McDonald’s keyboards and soulful, vulnerable voice replaced Johnston’s chunky guitar and bluesy vocals. The band that had hung out with Hells Angels was suddenly pioneering the pristinely produced style now known as Yacht Rock. That term refers not to the smooth music’s lyrical content but to where it’s played by men swanning around in Magnum P.I. shorts, popped collars, and captain’s hats. Yet the band’s first album with McDonald does include a song with the lyrics “When things get stale / You get on a boat and sail / To Rio.” Their early albums had hints of Skynyrd (“Disciple”); now they were lifting riffs from Captain & Tennille (“Carry Me Away”).

The markedly different style didn’t interrupt the band’s chart success: Johnston sang lead in the band’s cover of Kim Weston’s “Take Me In Your Arms (Rock Me a Little While),” which reached #11 in 1975; the next year, McDonald took the band to #13 with “Taking It to the Streets.” The greatest song of the McDonald era, “What a Fool Believes,” topped the charts in 1979 and won two Grammys the following year.

Simmons’s and Johnston’s accounts are supplemented by memories from other Brothers, including McDonald, Templeman, and bassist Tiran Porter. The book has elements of the oral history form that’s been popular over the past decade or so; but whereas the best of this style are edited and organized to convey the sense of a conversation, this one feels more like a series of monologues, during which people wind up making the same observations. It is indeed poignant that the Doobie Brothers were inducted into the Rock and Roll Hall of Fame with T. Rex, for whom they opened on their first tour—but we don’t need that observation made by multiple people in the same words only pages apart.

As you’d expect from a book about a 1970s rock band, there are tales of acid trips, pot busts, and school-aged groupies. There are an awful lot of stories about motorcycles and the band’s charter jet, the DoobieLiner. Yet in admirable ways, the Doobies elude stereotype. Their few feuds are surprisingly tame. They even liked their label.

One source of conflict was the band’s two-episode arc on the sitcom What’s Happening!! Porter, the band’s only black member, had reservations about the show, which had black stars but white writers, directors, and producers. (The Doobies’ storyline was written by Sally Wade, who later married the comedian George Carlin.) Simmons says that he’s still often asked about that appearance, which wouldn’t surprise TV viewers of a certain age who still recite lines from it. In the firmament of sitcom dialogue, Raj Thomas’s “Which Doobie you be?” sparkles alongside Theo Huxtable exclaiming “Jammin’ on the one!” to Stevie Wonder.

Another trait that made the Doobies unlike their more stereotypical peers was their selflessness—they seem like genuinely nice guys who are willing to check their egos for the sake of the music. The contrast with their contemporaries the Eagles, a band full of alpha dogs, is striking. McDonald constantly downplays his talents and contributions; Johnston expresses no resentment about the band’s enormous success without him, or its stylistic changes.

The band’s album covers illustrate those changes. On the first, four bandmates pose in denim, leather, and long hair. The last with McDonald, nine years later, features seven members, and the only constant is Simmons—who’s now wearing a skinny tie and sporting what looks like a mullet. They are rock’s Ship of Theseus: How many members can you replace before it’s a different band?

Attempts to reconcile these different identities are dubious. Johnston insists that the new direction was “just as valid as anything we had done previously”; the band’s photographer adds, “I’m not saying what’s better or worse; it was just different.” Meanwhile, McDonald explains, “It may be my voice on some of the songs, but it was the band that adapted everything, not just me.” Yet after the band split in 1982, McDonald’s solo album sounds like the New Doobies, while the band’s 1989 McDonald-less reunion album sounds like the Old Doobies.

Few bands have enjoyed so much chart success with such different styles. Although that remarkable fact doesn’t make the Doobies a great band, it does make their story one any rock fan should know better than most do.

Jay Powell warns US recession is ‘certainly a possibility’