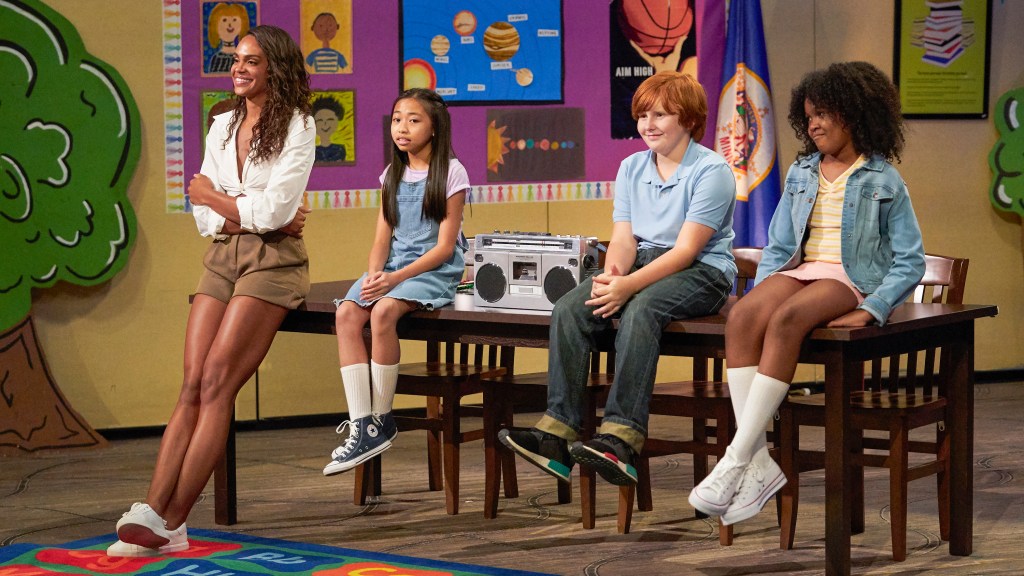 SPOILER ALERT: Do not read if you have not yet watched the Oct. 26 episode of “The Bachelorette.”

After night one’s elimination wrapped on Michelle Young’s season of “The Bachelorette,” 23 men moved into their new home in Indian Wells, Calif. The cast of suitors prepared for three dates — two group dates and an individual one-on-one.

The week’s dates had a pattern of normalcy, as they all reflected Michelle’s passions outside the Bachelorette bubble. The fifth-grade teacher brought 10 of her men “back to school” for an afternoon of trivia, science experiments and musical chairs.

Romeo Alexander, a mathematician from Harvard, excelled during the math trivia, while Brandon Jones was mocked for his inability to spell during their spelling tests. But during each challenge, Peter Izzo made enemies for his obnoxious behavior, even being called out by Will Urena as a “narcissist” in front of Michelle.

The post-date cocktail party had Peter fuming and he confronted Will about the exchange. It eventually died down, but Michelle questioned Peter about his ability to handle conflict and worried that he would one day use the same angry communication tactics against her.

In contrast, there were several highlights of the evening, including Michelle’s time with Rick Leach and her playful exchange with Brandon, who ultimately received the group date rose.

The next day, Michelle took Jamie Skaar to a one-on-one in Joshua Tree. The two climbed the rocks and shared a picnic on top of the mountain. Later that night, Jamie shared his backstory, including several tragedies throughout his life. Jamie’s childhood had never been traditional, starting with young parents who were never married. But as he got older and money problems occurred, his mother also struggled with her mental health. He and his family tried to help her, but when he was 24, she died by suicide.

The story brought Michelle to tears, and she complimented him on his grace and composure in the wake of his loss. The night wrapped with a private concert from Caroline Jones and a rose.

The second group date paid homage to Michelle’s basketball roots. WNBA players Dearica Hamby and Diamond DeShields joined the former D1 collegiate athlete to host a day of drills and games for 10 of her men.

The men gathered for a game of five-on-five and competed for a spot at the post-game cocktail party. The winning team included Rodney Matthews, Martin Gelbspan, Nayte Olukoya, Chris Gallant and Spencer Williams, and the losing team was sent home. The exception was Joe Coleman.

Joe, a former Minnesota Mr. Basketball, stood out on the court. He and Michelle both shared a love of the game and hometown, and their connection was felt by the rest of the cast. He was voted the MVP of the game and was invited to join the winning team for the cocktail party.

What All the Scientific Jargon in Beauty Product Claims Actually Mean

During their time together, Joe shared the news that a former coach had passed away, and Michelle comforted him over the loss. They furthered their connection about their mutual interests, and he was rewarded the group date rose.

That validation for Joe sparked whispers from other contestants. Rumors began that the two might have known each other before the show — that they previously connected back in their hometown of Minneapolis.

The talk continued the next day during the preemptive rose ceremony cocktail party, and Jamie grew disturbed by the accusations. He was angry about it among the small group of men discussing, but then turned gentle and empathetic when he brought the topic to Michelle. He told her that it had been a point of discussion in the house, and she was upset that people were questioning her intentions and authenticity. He also told her that his friend in Minnesota had run into her in a bar and accused her of being coupled up with a “tall, light-skinned baller.”

Michelle gathered the men together to address the rumors head-on. She told the group that she met each man for the first time on night one and that everyone was on an even playing field. Despite that, she admitted that she and Joe had exchanged messages on Instagram years prior, and he ghosted her before they ever met. She opened the floor for questions but was met with silence from the men.

She excused herself from the party and left the group shocked. Since only a handful of men had been privy to the gossip, the others were taken aback by her admission. They were upset that she was upset and wanted to find the man responsible for the drama. Jamie was quiet when his peers asked for answers. In a confessional, he admitted to feeling awkward but continued on with a charade of ignorance. While others fished for information, he joined them.

The remainder of the cocktail party was canceled, and the eliminations began. Brandon, Jamie and Joe went into the rose ceremony protected, and 16 other men joined them. Four were eliminated: Pardeep Singh, Daniel Tully, PJ Henderson and Alec Thompson.

The men who survived were comforted by their roses but still asked the question, “Who confronted Michelle?”

“The Bachelorette” airs Tuesdays at 8 p.m. on ABC.

You Can Put Daphne Rubin-Vega’s Sofrito On Almost Anything

Katie Holmes Has ‘Sworn Off Men’ For The Time Being In Order ‘To Concentrate...