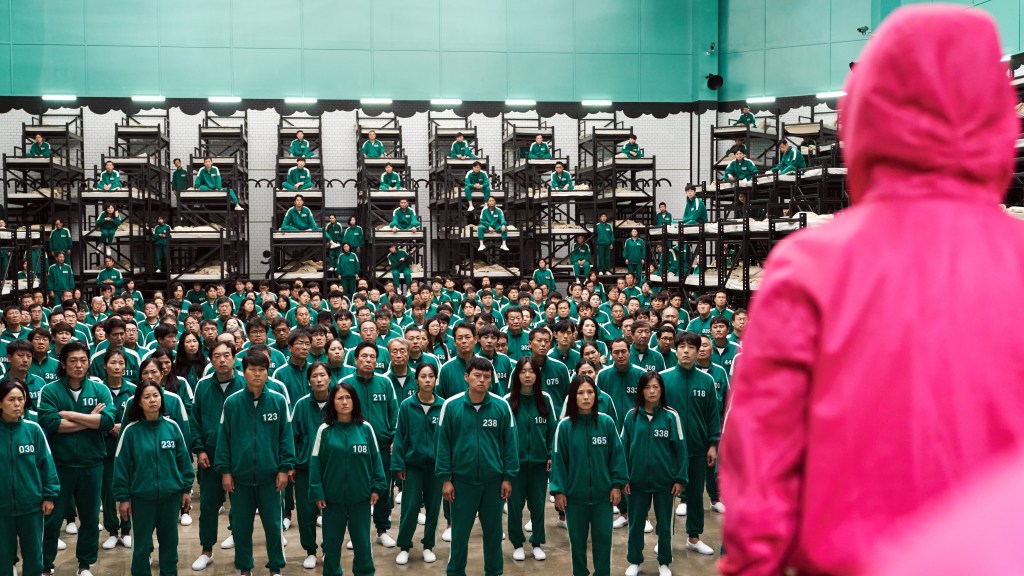 SPOILER WARNING: This article discusses the plot of “Squid Game” and its ending.

Hwang, in an interview with the Guardian published Tuesday, asked, rhetorically, “Have you seen ‘Space Jam 2’?” — a slap at the widely panned animated/live-action “Space Jam” sequel starring James. Hwang continued, “LeBron James is cool and can say what he wants. I respect that. I’m very thankful he watched the whole series. But I wouldn’t change my ending. That’s my ending.”

Earlier this month James, in an post-press-conference exchange with Lakers teammate Anthony Davis that was recorded and shared by an Orange County Register reporter, said he finished “Squid Game” but hated the final scene in which protagonist Seong Gi-hun (Lee Jung-hae) decides to not get on a flight to the U.S. to see his daughter and apparently leaves the airport to track down the mysterious organizers of “Squid Game.”

“I didn’t like the ending though. What are you doing?” James says the clip. “Get on the flight and see your fucking daughter.”

Hwang told the Guardian that if James has a “Squid Game” ending “that would satisfy him, maybe he could make his own sequel. I’ll check it out and maybe send him a message saying, ‘I liked your whole show, except the ending.’”

James kept the pseudo-feud going, reacting to Hwang’s comments on Twitter in mock disbelief. “This can’t be real right??!! I hope not,” King James tweeted, followed by 10 laughing emoji.

Netflix hasn’t yet officially announced a Season 2 order for “Squid Game,” which seems all but certain. The show has rocketed to become Netflix’s biggest-ever TV show, at least based on the streamer’s metric that counts number of households who access a given title for at least 2 minutes. The company said 142 million member households globally — about two-thirds of all subscribers — sampled “Squid Game” in its first four weeks of release, a new record. (Note that Netflix’s measurements aren’t verified by a third party.)

Leaders from Snapchat, TikTok and YouTube will face lawmakers about child safety

In the Guardian interview, Hwang confirmed that he’s talking to Netflix about a second season of “Squid Game.”

“Of course there is talk. That’s inevitable because it’s been such a success,” he said. “I have a very high-level picture in my mind, but I’m not going to work on it straight away. There’s a film I really want to make. I’m thinking about which to do first. I’m going to talk to Netflix.” Hwang joked, “It’s possible that I have to do season two to become as rich as ‘Squid Game’s’ winner.”

Netflix paid $21.4 million for the nine-episode thriller, and the company estimates “Squid Game” will deliver an $891 million in what it calls “impact value.” That’s according to confidential Netflix data leaked to Bloomberg. Netflix subsequently fired an employee who admitted they downloaded the data and shared it outside the company, evidently because the staffer was upset about the company’s defense of Dave Chappelle special “The Closer,” which among other things spurred an employee protest over the comedian’s transphobic commentary.

In “Squid Game,” 456 debt-stricken contestants compete in a deadly competition of mysterious origin, pitting them against each other in a series of children’s games for the chance to win 45.6 billion won (about $38.5 million) in prize money.

Hwang has said he intended “Squid Game” to highlight the growing wealth gap in the modern world. “I wanted to write a story that was an allegory or fable about modern capitalist society, something that depicts an extreme competition, somewhat like the extreme competition of life,” he told Variety in an interview last month.

Why This Beauty Writer Wears Floral Fragrance All Year Round

‘Spencer’ Locations: From Sandringham to That KFC Scene—Here’s Where It Was Filmed

Theory: Pepper on ‘The Masked Singer’ Is 1,000 Percent Natasha Bedingfield