Slower monthly US jobs growth and a swelling labour force offered some relief to the Federal Reserve as it looks for signs that the economy is cooling, but economists warn a third consecutive 0.75 percentage point interest rate increase later this month cannot be ruled out.

The world’s largest economy added 315,000 positions in August, in line with economists’ expectations. That compares to the downwardly revised 526,000 jobs created in July, which had helped to anchor the unemployment rate at a multi-decade low. The number of jobs added in June was also revised down to 293,000, from almost 400,000.

Despite August’s gains, the jobless rate edged up 0.2 percentage points to 3.7 per cent. As the size of the labour force swelled by 786,000, the number of people looking for work but still unemployed rose by 344,000. The labour force participation rate, which tracks the share of Americans either employed or seeking a job, ticked higher as a result to 62.4 per cent, but still hovers below its pre-coronavirus pandemic level.

The data, released by the Bureau of Labor Statistics on Friday, underscore that the labour market remains robust, even as the Fed has embarked on its most hawkish monetary tightening since the early 1980s.

“I do think the Fed will like the fact that the labour force participation rate has gone up, but the bigger issue for them remains that 300,000 jobs a month is still way too fast,” said Ajay Rajadhyaksha, global chair of research at Barclays.

Confronted by the most elevated levels of inflation in four decades, the central bank is debating how high to raise interest rates and for how long to keep them at a level that actively restrains economic activity.

In four months, the target range of the federal funds rate has jumped from near zero to between 2.25 per cent and 2.50 per cent, and many officials think rates need to rise closer to or above 4 per cent at some point to successfully tame inflation.

Now, the Fed is faced with the question of whether to extend its string of 0.75 percentage point rate rises for yet another meeting later this month or shift to a slower pace and implement a half-point adjustment at its September meeting.

“Clearly they have a lot of work to do ahead of them,” said Robert Dent, senior US economist at Nomura. “[But] I think they know that they can’t keep hiking by 75 basis points forever.”

All eyes are on the next inflation report due out later this month, but after the Fed enters its scheduled “blackout” period where it is limited in its public commentary.

Dent said that report is “ultimately the most important input for the Fed at this point for their near-term discussions”.

Most economists believe a 0.75 percentage point rate rise in September is firmly on the table, especially in light of the extremely hawkish message sent from chair Jay Powell last month that the central bank would “keep at it” until it has restored price stability.

Powell also admitted that the process would probably involve a sustained period of lower growth, higher unemployment and “some pain” for households and businesses.

America needs a proper risk strategy for its relations with China

For Veronica Clark, an economist at Citigroup, said a third consecutive 0.75 percentage point increase later this month would help to ratify Powell’s message and underscore the Fed’s commitment to stamping out price pressures.

“There’s no obvious sign, certainly not in the inflation data and not in the labour market data, to tell you that we’re going to be running at a consistently slower underlying pace of inflation,” she said. “In that sense, you do need to just be more aggressive and if you’re given the option to again do a [0.75 percentage point move], why not take it?” 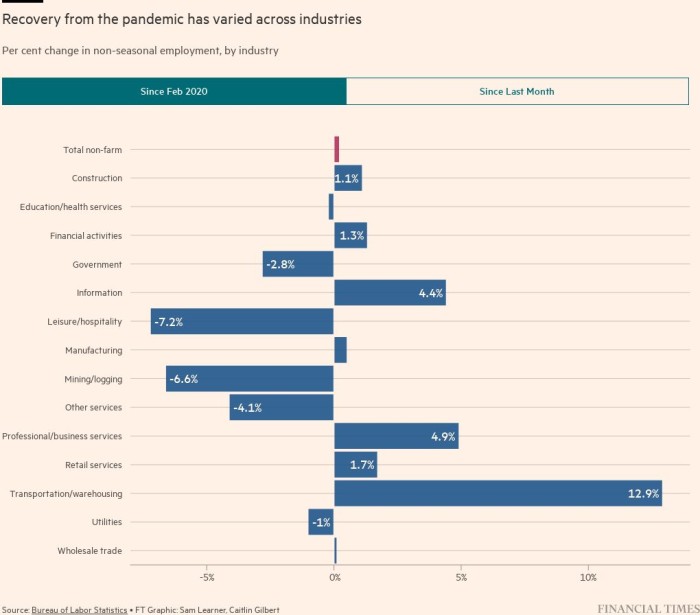 Economists have expected the rate of monthly jobs growth to slow, especially as most of the losses brought about due to the pandemic have been recouped. But employers are still grappling with widespread labour shortages, meaning they are having to compete fiercely to retain workers and hire new ones.

As such, wages nationwide have risen sharply, sparking concerns of a feedback loop whereby companies are forced to charge more for their products and services to cover these expenses, leading workers to demand even higher pay.

Average hourly earnings rose again in August, with wages up 0.3 per cent for the month, or 5.2 per cent on an annual basis.

The number of professional and business services jobs rose by 68,000 and employment in the healthcare industry increased by 48,000. Retail and manufacturing jobs also ticked up, while those for the leisure and hospitality sector showed little change. The same was true for the construction and transportation sectors.

In financial markets, the yield on the two-year US Treasury note, which is sensitive to interest rate expectations, was down 0.11 percentage points at 3.41 per cent, having traded around 3.48 per cent just before the release of the jobs data. The S&P 500 gave up gains from earlier in the session to be roughly flat during lunchtime trading in New York.

The Price Of Pride – The American Conservative

‘This is all because of the politicians’: rising prices anger Indians