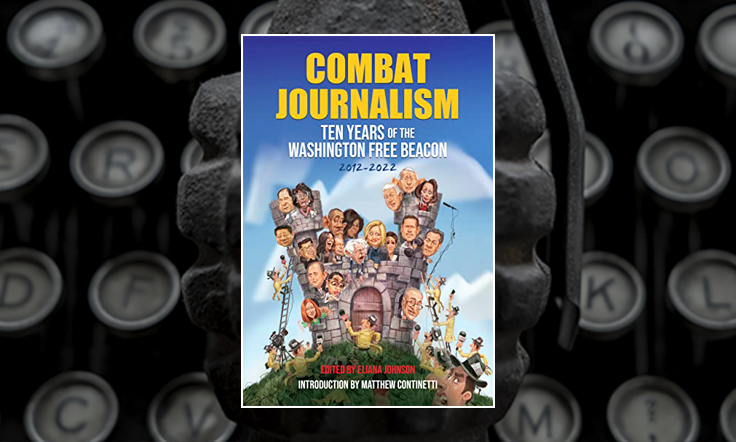 BENGUELA, Angola—The year was 2012. Fresh off my third divorce, I had just landed a private security gig in Cyprus. I don’t know how Margaret Continetti found me, but she did. The telegram was brief: “Are you alive?” As it so happened, I was.

Hiring an ombudsman of Biff Diddle’s caliber was the best thing that ever happened to the Washington Free Beacon, yet I am as shocked as anyone that this run-of-the-mill digital broadsheet has lasted this long. “We” celebrated our 10th anniversary in February. (I was not invited to the party, which is probably for the best.)

Margaret left years ago to work for a rental car company, but her replacement Eli A. Johnson seems capable enough. He asked me to review Combat Journalism: Ten Years of the Washington Free Beacon, a book whose publication I strenuously opposed on moral grounds. It came out in March, but I’m only just now getting around to it because I’ve been busy [redacted for national security concerns] and hunting genetically modified leopards in Zaire with Gary Busey and the Trump boys.

I didn’t hate the book. As most of you are probably aware, I’m no fan of the Free Beacon. I am particularly annoyed by its inexplicably timid support for American military dominance at home and abroad. Its ambivalence toward the state of Israel drives me mad. Nevertheless, I rather enjoyed pursuing this collection of work, arranged by category and in chronological order to allow readers to essentially relive the terror of the Obama years and of Hillary Clinton’s near victory in the 2016 election, traumatic events I’d worked hard to suppress. It was an emotional journey. Some pages were ripped out in disgust, while others are still soaked in my thick tears.

Men of the Decade

Well curated, if I’m being honest. Jose Rodriguez (2012), wearer of “big boy pants,” and Biff Diddle (2013), exposer of “jihadi apologist Adam Kredo,” were particularly inspired selections. The inclusion of Dylan Byers (2015) was a bit triggering. I certainly commend his role in bringing to light the malfeasance—in the form of unauthorized Trump campaign donations—of disgraced Free Beacon “writer” Andrew Stiles, as outlined in the infamous Diddle Report that many people are talking about. But that doesn’t mean I’m not physically repulsed by Byers’s beard and “West Coast” lifestyle. (I am.)

On a related note, the Free Beacon made an unambiguous promise to its readers in 2015—that it would “continue to investigate” whether Islamic State terrorists were responsible for the disturbing prevalence of “man buns” in the United States. It’s been more than seven years, and I have yet to see a follow up. That’s unacceptable. Almost as unacceptable as blindsiding your humble ombudsman with a moving tribute to Greg Gianforte (2017), the former GOP congressman best known for body-slamming a British journalist who wouldn’t shut up about Obamacare. I don’t often cry, but I wept inconsolably for several hours after reading that. A beautiful moment in the history of this great country. Heroes really do exist.

Not my favorite section. After all I’ve done to ensure that Lachlan Markay will spend the rest of his life in jail by exposing his ties to the domestic terror group Antifa, I was appalled to see his Free Beacon byline again. Continetti was out of her mind letting Markay “report” on the Democracy Alliance—bunch of perverts if you ask me. It’s like assigning Hillary Clinton to investigate the “suicide” of Jeffrey Epstein, or letting Adam Kredo cover the Iran nuclear negotiations. Wake up!

For all her faults, Continetti had Obungler pegged. Her columns on Trump’s predecessor have gotten better with age. It’s easy to forget how much our media and cultural elites adored this guy and his insufferable coterie of Pod Bros. Our so-called comedians whined that B. Hussein was impossible to mock—too cool, too noble, too cerebral. Some people are finally starting to realize what an arrogant prick he was and is, but Continetti was ahead of the curve.

Columns such as “Phonyism,” “Love in the Time of Obama,” “Divorce Beltway Style,” and “Dialing It In,” are insightful snapshots of the liberal decadence that accelerated the American public’s revolt in the form of Donald Trump. Chris Hughes and his Facebook spouse, Sean Eldridge. Alex Wagner and Sam Kass, the trust-fund lovebirds. Tony and Heather Podesta, the lobbyist power couple. Obama and the “interesting Italians” he dined with as Russia invaded Ukraine (the first time) and annexed Crimea, among other “bull sessions” designed to “satisfy the president’s intellectual curiosity as he indulges in nuanced conversations about life, ideas, and art.” These are the characters one must study to understand “what the hell is going on.” Alas, the mainstream media remain as clueless as ever.

Democrats are Delusional. Republicans Are Nuts.

Speaking of which, remember when the political press corps freaked the f— out after getting scooped by the Free Beacon? Those were the days. Alana Goodman’s reporting on “The Hillary Papers” and “The Hillary Tapes,” reprinted here in all its glory, caused a collective caterwauling among the so-called serious journalists and “Notorious RBG” stans who cheered the late Supreme Court justice’s refusal to let a black man choose her successor. (How’s that going, by the way?)

In retrospect, it’s amazing to think how many people were in denial about the fact that Hillary Clinton will never be president. How the truth warriors shrugged when Hillary’s minders were escorting them to bathrooms and standing outside their stalls. How the intellectual elites rallied around ABC News anchor George Stephanopoulos and the $75,000 donation to the Clinton Foundation he’d forgotten about until the Free Beacon reminded him. How the former Clinton aide “revealed” it in an exclusive interview with Dylan F—ing Byers. Anyone who thinks a Hillary Clinton administration would have been any less exhausting than the Trump administration is kidding themselves.

Matthew Walther’s account of meeting Lena Dunham (who?) and getting the wobblies after smoking some dank kush (a Blueberry Diesel, Black Widow hybrid if I had to guess) gave me flashbacks to the time I accidentally ingested ayahuasca at a Melissa Etheridge concert. I couldn’t help but feel sorry for the poor chap, who poops his proverbial diaper, says “I love you” to his Uber driver, finds absolution, and dozes off to Peter Gabriel’s “Solsbury Hill,” a song I have also hated my entire life.

Way too much Adam Kredo in this section. By now it should be abundantly clear that this creep is up to no good. As previously noted, the Free Beacon is a bit of a lightweight when it comes to supporting Israel, but I did thoroughly enjoy Michael Goldfarb’s eloquent diatribe against the “Jew-baiting paleocons,” who insist on inventing new forums for their anti-Semitic bullshit. “We’re here, we’re neocons, and you’re never going to be rid of  us,” has a nice ring to it. The Stiles piece on his trip to Iran was too long, didn’t read. Good riddance.

I’m so glad the pink running shoes Wendy Davis wore during her “inspiring” abortion filibuster ended up in the hands of the Free Beacon. Brent Scher deserves a medal for crushing the dreams of all the hippie feminists lined up outside the failed Democrat’s estate sale in 2016. From national celebrity to irrelevant loser. Davis actually ran for Congress in 2020 and no one cared. Her signature is basically worthless now.

Our reporting on then-senator Claire McCaskill’s (D., Mo.) private plane—the one she used to travel the state while pretending to ride in an RV like a normal person—is the sort of “speaking truth to power” our nation’s journalists claim to practice. In reality, the political press corps remains infested with elite liberals who find their jobs a “bore” and difficult now that a Democrat is president.

As is often the case, the Free Beacon was ahead of the curve. The disgraced journalist who writes under the pseudonym “Sonny Bunch” was trying to warn us about the crisis of wokeness as early as February 2015. The Free Beacon‘s reporting on the subject in recent years has been thoroughly adequate, and is a fitting capstone to our previous coverage of the Democratic Party’s reckless depravity and decadence as our university’s churned out class upon class of emotionally unstable weirdos. The inmates are running the asylum now.

I thought “Westeros Playbook” by C.J. Ciaramella was the single most egregious example of nerd journalism in the history of the English language—until I read Continetti’s “I Don’t Love Spock,” a Star Trek-themed abomination of indecipherable dork jargon. “The Juggalo Cult” by Bill McMorris was more to my taste. (Shout out to my boy Tim “Hog Daddy” York. Stay grounded, Fam.) Tears streamed down my face while reading the final piece, Yuichiro Kakutani’s “Reflections on Becoming a U.S. Citizen.” Either that or it made me really sweaty. At my age, it’s getting harder to tell the difference. Kakutani’s “faith” in his new country is probably misguided. The American people appear neither willing nor able to “overcome any obstacles through mutual cooperation.” Nevertheless, he persisted. God bless him.

America might never be great again. Rest assured, however, that the Free Beacon will be there every step of the way, terrorizing the libs until the bitter end.

Game over, Putin! Bono and the Edge sing ‘Stand by Me/Ukraine’ in Kyiv metro...

Australia raises interest rates to tame inflation ahead of polls

Liz Cheney Blames Trump and His Supporters for Buffalo Shooting