Serbian President Aleksandar Vucic gave an “emergency” address to his nation Sunday afternoon, claiming without evidence that Kosovo would attack Serbia at midnight.

“We we will ask for peace, but I’ll tell you right away: there will be no surrender and Serbia will win. If they try to start persecuting Serbs, bullying Serbs, killing Serbs, Serbia will win!” pic.twitter.com/dgeJmcyteQ

The rest of the speech gives you a bit more idea of what is at stake.

“The situation for our people in Kosovo and Metohija is very complicated and complex (…) many people have reduced their attitude towards Kosovo and Metohija to sloganeering in which they say ‘Kosovo is Serbia’ and that’s all, but I don’t think we have ever been in a more complex and difficult situation than it is today“, said Vucic in his address to the public regarding the situation in Kosovo.

He said that the regime in Pristina is trying to take advantage of the overall situation in international relations currently.

“They made a decision to impose things they have no right to impose, primarily on the people in the north of Kosovo and Metohija. In advance, they sent their units with 21 tons of fuel and everything else to the administrative crossings of Jarinje and Brnjak, with the desire to stop all those who have Serbian identity cards. All this should start tonight at midnight, while at the same time they will be convincing the Serbs to give up KM plates,“ announced Vucic.

For those of you who don’t have an office with clocks showing the time in the world’s capitals (should Belgrade qualify as such), midnight in Serbia is 6 p.m. EDT.

After the death of Josip Broz Tito, Yugoslavia slid into civil war. The Croats and Slovenia declared independence, and war broke out between Croatia and “Yugoslavia” in 1991. That war resulted in Slovenian independence after a “ten-day war” and Croatia’s independence in 1995. Bosnia and Herzegovina declared independence in 1992. A war ensued that was settled in 1995 with recognition of the independence of Bosnia and Herzegovina. Macedonia left peacefully in 1992. The resulting state of Serbia and Montenegro broke up in 2006 when Montenegro declared independence. Kosovo, a mostly Albanian and mostly Muslim province, experienced an insurgency from 1998-1999. It ended with the withdrawal of Serbian troops and the insertion of a NATO-led peacekeeping force called Kosovo Force (KFOR). However, Kosovo remained part of Serbia.

In 2008, Kosovo declared independence. Serbia refused to recognize Kosovo as an independent nation. Most of NATO and the EU and a little over half the UN membership granted recognition.

In practice, Kosovo’s governance looks more like the operations of an autonomous republic, with Serbia having a significant say in appointments to Kosovo’s security apparatus.

Since 2008, Serbia and Kosovo have had a fraught relationship. The proximate cause of this crisis is Kosovo imposing reciprocal treatment on Serbs. For example, Serbia required Kosovo citizens to have a special ID card to enter Serbia, while Serbian citizens only needed their passports. The Kosovo government of Prime Minister Albin Kurti changed that to require Serbs to have a special ID issued by the Kosovo government.

This round of hardball has happened because Kurti is trying to show Kosovo is independent. He took this action unilaterally and outside an EU-mediated process to resolve “bilateral issues,” which undercuts Vucic’s narrative that Kosovo belongs to Serbia and everything is under control.

Kosovo PM Kurti confirms gunshots fired by criminals controlled by Serbia’s govt in north 🇽🇰, urges calm & cautions about disinformation.
“The hours&days ahead can be challenging. We’re facing the 🇷🇸 chauvinism that we know well…Will work day&night for our democratic Republic.” pic.twitter.com/mA85SpTIwk

KFOR is on high alert and has moved its forces to the trouble area.

The #NATO Mission in Kosovo, KFOR, has said it is ready to intervene if the country’s stability is threatened in northern Kosovo.#Vučić has launched an emergency appeal to the nation in connection with the situation in #Kosovo after the meeting with Military officials.. pic.twitter.com/WHCH12zfQf

The Russians, to no one’s surprise, have weighed in on behalf of their Serb allies. 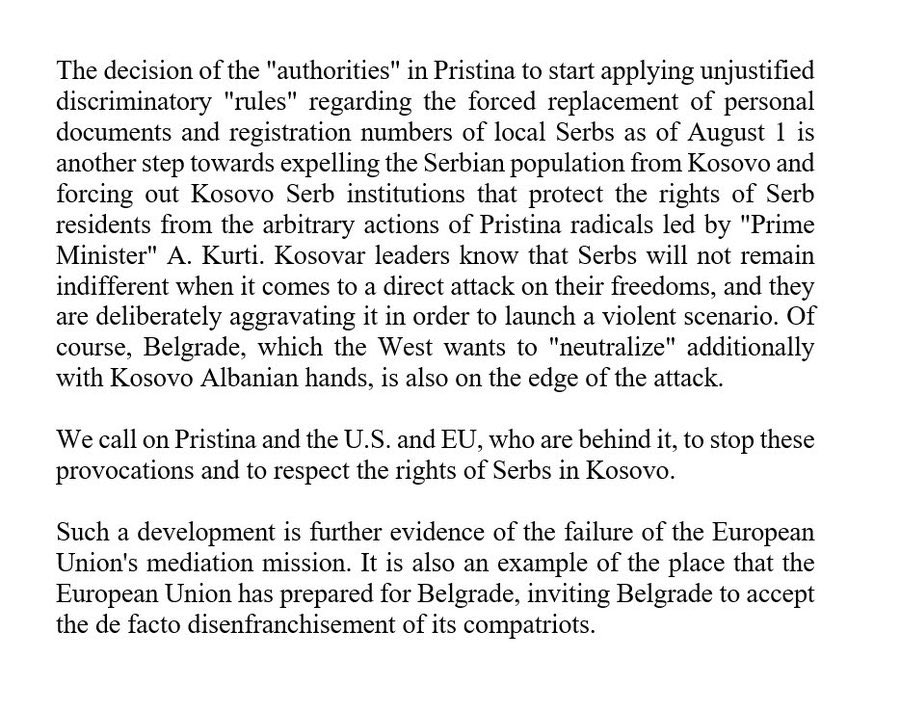 All in all, there is a lot of alarmist information floating around. The odds of shots being fired in a situation where NATO forces would be targeted is about zero. This is, however, a useful way for Russia to make a little mischief to unsettle parts of Eastern Europe. While this now looks like a lot of nothing, keep in mind what country kicked off World War I and thought it could go nose-to-nose with NATO. From what we’ve seen so far this year, we shouldn’t preemptively dismiss anything as impossible.