As the 2022 midterms loom ever closer, Republicans have increased their generic ballot lead by two points in the last fortnight. The latest Rasmussen Reports poll, released Friday, reveals that voters are ready to cast a ballot for Republicans over Democrats by a 10-point margin — 49% to 39%. This is a two-point improvement from the July 9 survey, which had generic Republicans up over Democrats by eight points (47% to 39%). According to Rasmussen, when asked, “If the elections for Congress were held today, would you vote for the Republican candidate or for the Democratic candidate?”—

The last time control of Congress changed hands, in 2018, Democrats held a seven-point generic Congressional ballot advantage among likely voters in July (47% to 40%). The spread tightened to a statistical dead heat by Election Day. When the dust settled, Republicans had increased their hold on the Senate while Democrats had won a slim majority in the House.

But things are looking decidedly redder going into the 2022 midterm season:

Related: The Morning Briefing: Republicans Just Might Find a Way to Blow It for November

In a further confirmation of observations that the Democrat party has become the party of the wealthy, “Republicans lead 52%-37% among voters with incomes between $30,000 and $50,000 a year,” while conversely, “Democrats have the same 15-point advantage, 52% to 37%, among voters with annual incomes over $200,000,” notes Rasmussen.

In presidential approval polling, Real Clear Politics has Joe Biden’s approval rating underwater by just about 20 points, as 37.2% of American approve of the job he’s been doing, compared to 57.1% who disapprove. 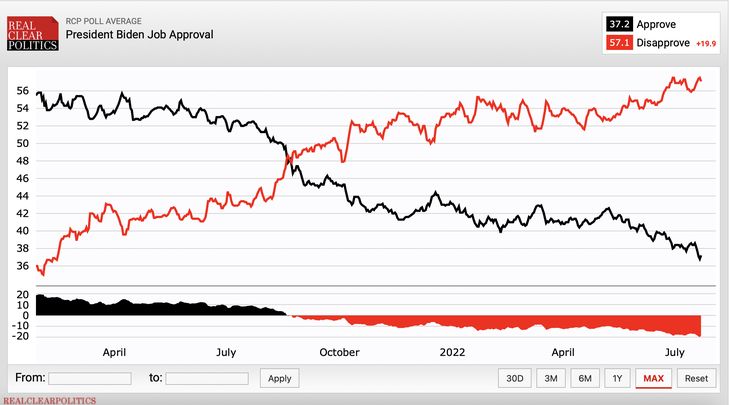