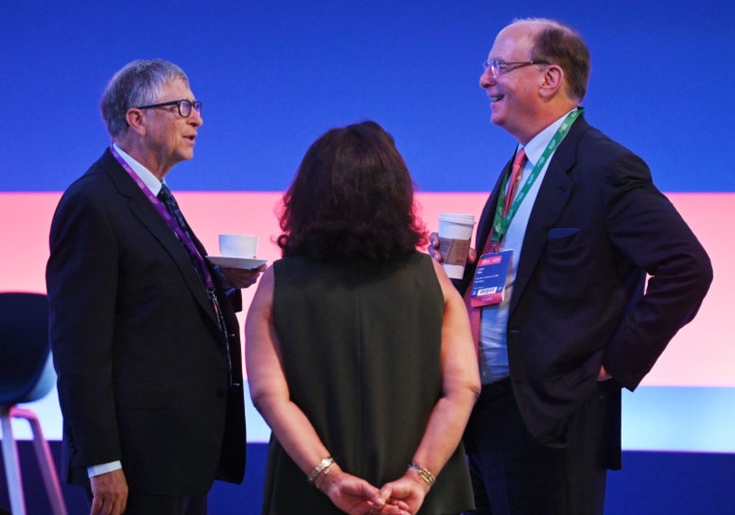 Fink’s embrace of environmental, social, and governance investment policies, known as ESG, potentially runs afoul of several laws, the AGs charge in a letter sent to Fink. Instead of managing state pension funds and finding the best returns on investment, the AGs write, BlackRock uses “citizens’ assets to pressure companies to comply with international agreements” such as various climate initiatives.

Republicans are increasingly targeting asset managers such as BlackRock over their pro-ESG policies. They allege that these asset managers are transforming into backdoor channels for liberals to implement policies outside of the legislative process and leaving aside their principle, legal duty: maximizing returns for shareholders.

Critics of ESG say the policies are often arbitrary and can hurt a company’s bottom line. Moreover, ESG metrics can be gamed. Many companies, such as Tesla, receive a high ESG score under one metric while they rank poorly on another.

“Rather than being a spectator betting on the game, BlackRock appears to have put on a quarterback jersey and actively taken the field,” the AGs write. “As a firm, Blackrock has committed to implementing an ESG engagement and voting strategy across all assets under management.”

BlackRock manages an estimated $10 trillion in assets, a number larger than many first-world economies. Billions of those dollars come from U.S. pension funds. That extraordinary amount of money also gives billionaire Fink, a large donor to Democratic Party candidates and causes, tremendous influence over companies BlackRock invests in. Should Blackrock pull investments from a company over its climate or racial policies, two categories often included in ESG metrics, the company’s stock price would plummet.

The AGs assert that when BlackRock engages with companies over climate practices, it violates the states’ law about maximizing financial returns. For example, if BlackRock representatives pressure a company CEO to adopt a more expensive way to source energy in order to meet climate goals, that company may post lower profits. That drop in profits may translate to a lower stock price and harm pension funds invested in that company.

BlackRock has emerged as an explicit leader in the push “to retire fossil fuels,” the AGs allege. Part of that may be purely ideological or because of a desire to “attract investment from European or left-wing pension funds,” the AGs add. Regardless of motivation, BlackRock is obligated per law to only seek the best financial return on their investments.

Pressure from asset managers such as BlackRock appears effective. Sixty percent of respondents to a Federal Reserve Bank of Dallas survey last year said “investor pressure” was the number one reason that oil companies such as Exxon are not expanding operations.

West Virginia announced last month that it would no longer do business with Wall Street firms that boycott the fossil fuel industry. One of those firms included BlackRock. The ban will cost the firms $18 billion a year, according to the state’s treasury office.

It is so ON! Rep. Thomas Massie calls out the entire January 6 Committee...

You can’t put food on the table with an AR-15, which can decapitate a...