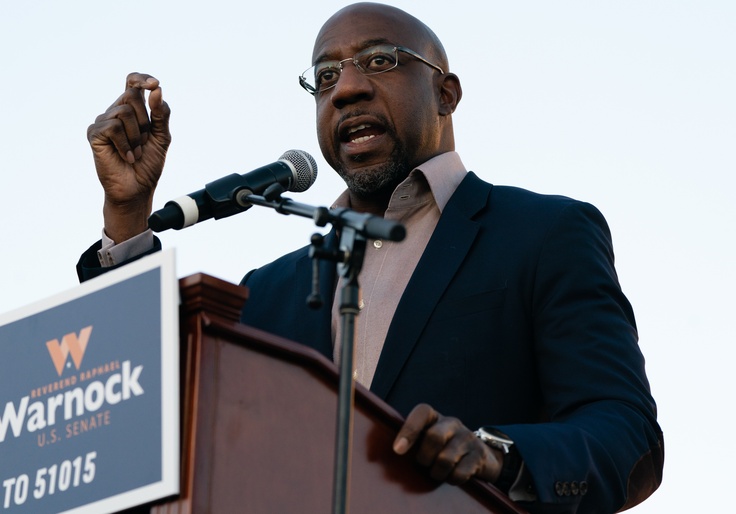 Sen. Raphael Warnock (D., Ga.) voted for a COVID-19 relief bill that steered $75,000 to a nonprofit social justice group he founded that’s run by the church that supplements his Senate salary to the tune of more than $100,000, according to government records.

The Martin Luther King Sr. Collaborative, a community activist group that Warnock led as CEO until at least 2020, sought and received COVID relief funding from the American Rescue Plan in September 2021, according to Georgia financial records. The Martin Luther King Sr. Collaborative was founded by the Ebenezer Baptist Church, where Warnock is still employed as lead pastor and which paid him $120,000 last year in addition to his Senate salary.

Warnock voted for the American Rescue Plan in March 2021, two months after ousting Republican Kelly Loeffler in a special Senate election. The bill passed on a 50-49 partisan split, with Warnock giving Democrats the 50th vote necessary to put it over the top.

“We were able to deliver on our promise to Georgia to pass historic COVID-19 relief. Georgia in a very real sense is delivering relief to the whole country,” Warnock said at the time, calling the bill “historic legislation.”

The funding raises questions about whether Warnock or his employers used Warnock’s position as a senator to benefit from the $1.9 trillion American Rescue Plan that some leading economists have blamed for skyrocketing inflation. Americans for Public Trust, an ethics watchdog group, said the federal relief funding adds to concerns that Warnock’s outside work poses a financial conflict. Warnock receives a housing allowance from Ebenezer Baptist Church that amounts to nearly $7,500 per month, according to the Atlanta Journal-Constitution.

“It’s not a great look to learn that a U.S. senator cast the key vote that awarded his former nonprofit tens of thousands of dollars,” said Caitlin Sutherland, executive director of Americans for Public Trust. “And now that it’s been revealed that Warnock is receiving a housing allowance from Ebenezer, this arrangement seems rife with potential conflicts of interest.”

Warnock served as CEO and chairman of the Martin Luther King Sr. Collaborative since 2016, although public records give different dates on when he left. His financial disclosure records, which he filed with the U.S. Senate, say he stepped down as chairman in August 2020. The nonprofit’s corporate filings in Georgia, however, listed him as CEO until April 2021, one month after his vote on the American Rescue Plan.

Warnock’s connection with the Martin Luther King Sr. Collaborative continued after he stepped down as CEO. The group’s new board chairman and CEO, Kenneth Palmer, is also on the board of trustees for the Ebenezer Baptist Church, which employs Warnock and pays his salary. The Martin Luther King Sr. Collaborative also shares an address with the church.

Critics of the American Rescue Plan argue that the massive government stimulus bill destabilized the economy. Larry Summers, who served as Treasury secretary during the Clinton administration, warned in February 2021 that the plan would trigger inflation “of a kind we have not seen in a generation.”

Warnock is locked in a competitive race against Republican challenger Herschel Walker, an election that could determine party control of the Senate next year.

Trump slams Fox News over attack ad ‘perverts,’ promises to ‘See you all in court!!!’

What Are You, Crazy? – John Podhoretz, Commentary Magazine