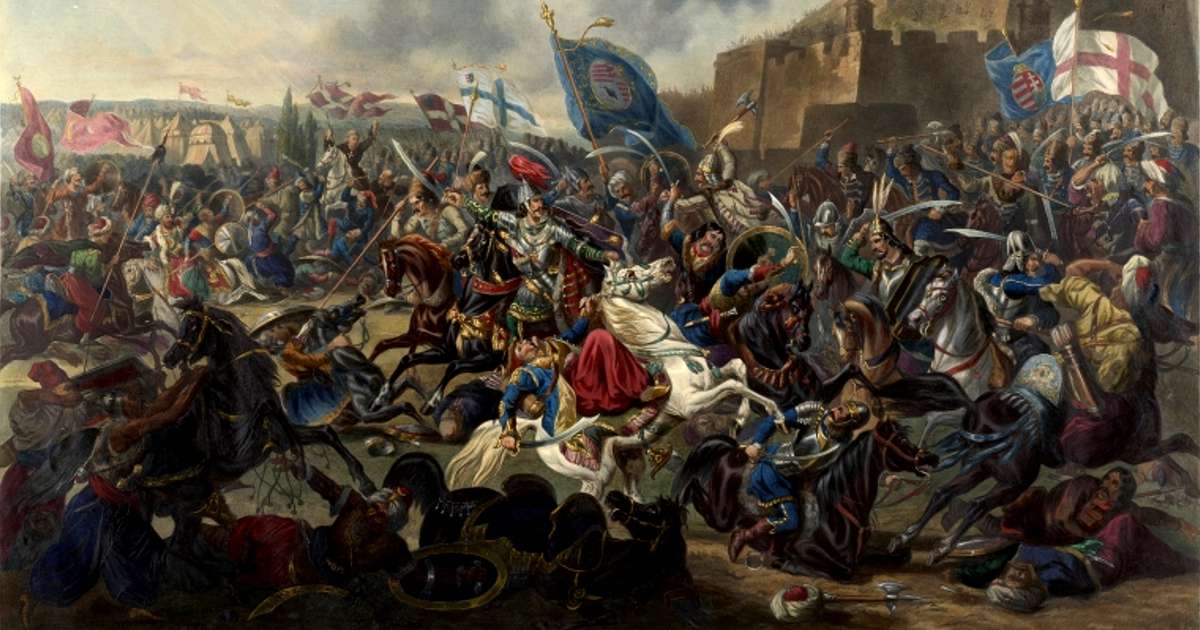 Today in history, on July 22, 1456, the West scored one of its greatest victories over the jihad—and, in so doing, inaugurated the ringing of church bells at noon.

Three years after conquering Constantinople, the Ottoman Sultan, Muhammad II, at the head of over 100,000 Turks, marched towards the strategic fortress town of Belgrade, key to Western Europe, in the spring of 1456.

Cognizant of all the death, destruction, and mindboggling atrocities this massive Muslim march presaged—memory of the sack of Constantinople was still fresh—a great panic swept through the Danube region.  Even Hungarian king Ladislaus V fled his capital to Vienna (on the pretext that he was going “hunting”).

Only one stood his ground—only John Hunyadi, the Transylvanian voivode who had long been a thorn in the Turks’ side.  Even as the king fled west, Hunyadi raced to the eastern frontier—towards, not away from, the Turkish army. He immediately manned the fortress of Belgrade with 6,000 veteran fighters at his own expense.  Although he implored the higher nobles for aid, few were responsive.

Meanwhile, the 70-year-old Franciscan friar, John Capistrano, went to southern Hungary calling on the people to take the cross and defend their nation against Islam. His “burning zeal, soul-piercing eloquence, and heroic austerities” set tens of thousands of the lower classes aflame.  Before long, a massive crusader force of some 40,000 peasants were following Capistrano.

The world had turned upside down: “Where is the French king,” a contemporary document inquires, “who wants to call himself the Christian king?  Where are the kings of England, Denmark, Norway, Sweden…? Unarmed peasants, blacksmiths, tailors, tradesmen are walking in front of the armies!”


By late June, Muhammad’s vast forces had reached and surrounded Belgrade. If it fell, all of Hungary and further west would be exposed to and eventually inundated by the hordes of Asia.

Muhammad ordered the heavy bombardment to begin on July 4. The crashing and careening cannon fire was so thunderously loud that it could be heard for a hundred miles around. Twelve days later, on July 16, massive breaches punctuated this once formidable fortress.

It was then that Hunyadi’s army appeared, floating down the Danube on makeshift vessels of war. Marching alongside them by land were Capistrano and his army. On seeing the puny, Christian fleet nearing their professional galleons, many of which were fettered together by chains and formed a huge damn across the water, the Turks scoffed, even as they braced for the inevitable crash. On the signal—loud cries of “Jesus! Jesus!”—the Christian flotilla crashed into the chained Muslim boats.

The Danube flowed with hot blood as a wild river battle took place for five hours. The massive linked chains of the Ottoman boats eventually burst asunder, and the Christian fleet made it to and reinforced Belgrade, which was at its final extremity.

A spectacular start for the relief force, it was only a scratch to the vast Muslim army. On that same day, Ottoman cannons—now living instruments of the sultan’s wrath—exploded in a barrage of fire that rocked Belgrade to its very foundation.

For another week, the cannons continued to thunder, until most of Belgrade’s ramparts were leveled. Then, at the crack of dawn, on July 21, for miles around, “one could hear the ceaseless beat of the drums that announced the attack.” Throngs of Muslims came rushing to the dilapidated fortress to cries of “Allah! Allah!”

It’s Time for Corporations to Pretend to Care Again, and Viewer Suggestions!

Once thousands of Turks had crowded in between the crumbling walls and the citadel, the signal was given: to the piercing sound of blasting horns, Hunyadi and his men came charging out of the citadel, even as throngs of hidden peasant crusaders appeared above the walls and behind the Turks. The Muslims were trapped between a rock and a hard place. According to one account:

A terrible struggle ensued. The Turks, though taken at an advantage, were as ten to one and armed to the teeth, whilst most of their antagonists were scarcely armed at all. A hand-to-hand melee went on in every street, but the fight was fiercest on the narrow bridge leading from the citadel to the town, where Hunyady commanded in person. …

Despite being so wildly disadvantaged in numbers and arms, the Christians—including Hunyadi, who fought in their midst like a common foot-soldier—held their own and managed to kill many of the Turks.

It was now just before dawn, July 22; the battle had raged for a day and night, and it was clear that the Christians, having reached the limits of human capacity and endurance, were on the verge of collapsing under the sheer numbers of their foes pouring in. High up on a watch tower, the 70-year-old Capistrano was seen waving the banner of the Cross and imploring Heaven for aid.


The Christians, now pushed back to the citadel and high places, began to rain down fire on the votaries of Islam.   With all the combustibles they could gather—wood, dried branches, anything that would burn—the defenders “cast them down, mingled with burning pitch and sulphur, both upon the Turks who were in the ditches and upon those who were scaling the walls,” writes a battle participant.

After all the shrieks had died out and the smoke cleared, the rising sun slowly revealed the gory aftermath. All around Belgrade, inside and out, were the dead and dying bodies of countless Muslims—charred beyond all recognition.

[T]he ditches and the whole space between the outer walls and the citadel were filled with their scorched and bleeding corpses. Thousands of them had perished there. The janissaries in particular had suffered so terribly that the survivors of them were thoroughly cowed, while the sultan’s body-guard, which had led the attack, was well-nigh annihilated. So, after a twenty-hours’ combat, the Christian host was able to breathe freely once more.

And yet, in terms of actual casualties, this was but a scratch to the gargantuan Ottoman army that still surrounded Belgrade. Another assault was expected; and Hunyadi ordered everyone to remain at his post, on pain of death, “lest the glory of the day be turned into confusion.”


By late noon on July 22, however, an unauthorized skirmish between the crusaders and jihadists prompted the former to pour out of Belgrade and take the battle to the Turks. Seeing that the die had been cast, Hunyadi and his professional men-at-arms rushed to their aid. By 6 p.m., the entire Christian army was fighting outside the ruined walls of Belgrade.

In this bedlam, even Sultan Muhammad was espied fighting. By now, however, the masses of Turks making up his army, who had set off expecting a relatively easy victory, had had enough. When the fiery Christians managed to capture and turn the blasts of several Ottoman cannons on their former besiegers, demoralization turned into panic, and the Turks, tens of thousands of them, fled, with Sultan Muhammad carried in their midst, “foaming at the mouth with impotent rage,” even as some 50,000 other Turks lay dead before the ruined walls of Belgrade.

It was arguably the worst defeat that Muhammad the Conqueror suffered in his long career of terrorizing Christians. And it is for this victory at Belgrade that church bells ring at noon—a tradition started by Pope Calixtus III to mark the time when a small but devoted force of Christians defied a much larger force of Muslims intent on annihilating them; a tradition that continues to this day, including in older Protestant churches—even if Christians of all denominations have forgotten or been shielded from its significance.


For more such stories, get Raymond Ibrahim’s new book, Defenders of the West: The Christian Heroes Who Stood against Islam, from which this account was excerpted.

Has US inflation finally started to slow?