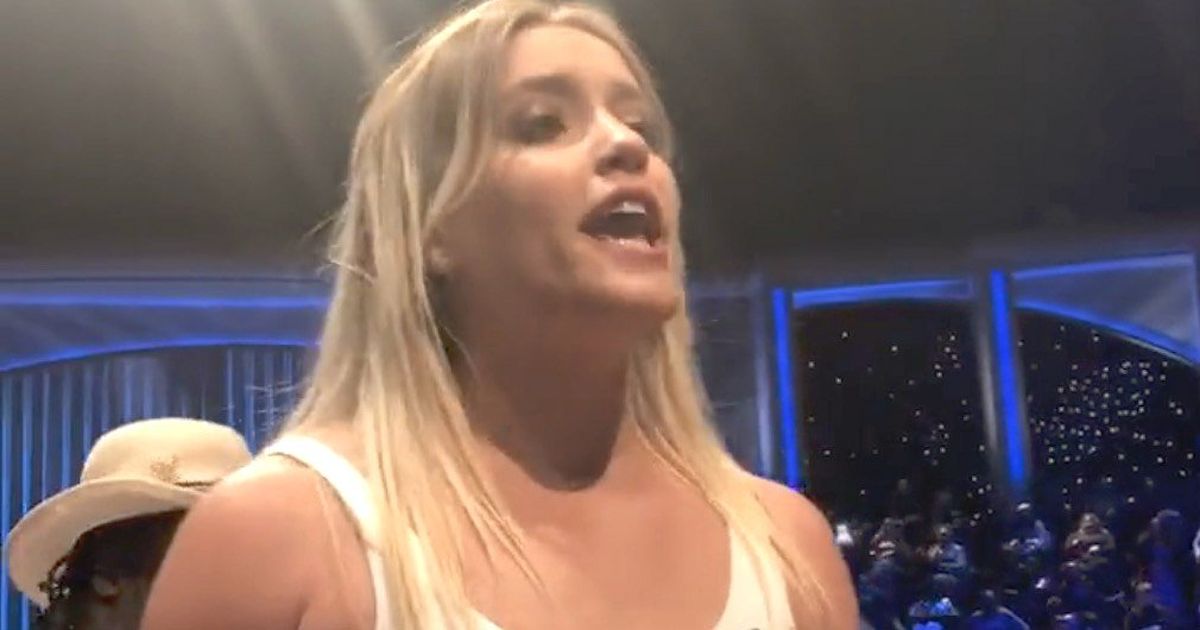 People who relish the sport of killing babies in the womb are arguably not the sharpest tools in the shed. A trio of abortion activists proved that this past Sunday at Joel Osteen’s Lakewood Church in Houston when they stripped down to their whitey tighties and shouted profane slogans demanding the right to dismember babies in the womb. Osteen’s church? Seriously? They might as well have protested at a liberal Episcopalian church.

The three attention whores stripped off their dresses during the church service and began screaming at the congregation. “It’s my body, my f-ing. It’s my body, my choice!” Blonde Girl #1 screeched as she glanced around to make sure everyone was looking at her.

“Overturn Roe? Hell no!” Blonde Girl #2 shouted as she removed her clothing.

Blonde Girl #2 continued, “I am who I am. I do what I say I can do, because I have a choice!” Sure, honey, see if it flies next time you assault someone on an airplane or get caught stealing a car. You don’t get to do anything you want just because “you have a choice.” You also don’t have a right to disrupt a church service, which is why you were escorted out of the building by security.

I decided to include the video here because it’s no racier than what you’d see at a gym or a track meet:

A group of abortion rights activists interrupted the June 5th Sunday service at Joel Osteen’s Lakewood Church in Houston, TX. The demonstrators stripped down to their underwear while chanting ‘My body, my choice’ and ‘Overturn Roe, hell no!’ pic.twitter.com/Py3AHTXWnW

If these chicks had done a five-minute Google search, they’d know that Osteen, a purveyor of the “prosperity gospel,” is hardly a dyed-in-the-wool social conservative. If I had to put money on it, I’d bet that he agrees with their views on abortion.


Related: Abortion Supporters Use This One Trick to Change the Narrative. Don’t Let Them Get Away With It.

The only comments I could find from Osteen on the topic of abortion were from a pair of interviews he gave to CNN in 2011 and 2016.

In 2011 he told Piers Morgan, “My view is that every baby should live, that, you know, that God’s created that life. And, so, again, that’s what I feel strongly about.”

He felt so strongly about it that he apparently didn’t speak again publicly on the issue again until 2016.

He was asked about abortion and same-sex marriage that year by the late Larry King and it went like this:

KING: How about issues that the church has feelings about? Abortion? Same-sex marriages?

KING: You have thoughts, though.

OSTEEN: I have thoughts. I just, you know, I don’t think that a same-sex marriage is the way God intended it to be. I don’t think abortion is the best. I think there are other, you know, a better way to live your life. But I’m not going to condemn those people. I tell them all the time our church is open for everybody.

That’s as clear as mud. “I have thoughts” and “I don’t go there” are the kinds of things you say when you try to please everyone and end up making everyone angry. If you call yourself a “pastor” and the best you can come up with is “I don’t go there” when asked about the greatest moral evil of our time, you need to find a different line of work.


The 30,000-foot view of this performance art is that it showcases the Left’s penchant for thumbing their noses at God. Whether Blonde Girl #1 knew it or not (and I seriously doubt she did), her “I am who I am” comment parodies what God said when he appeared to Moses in the burning bush in the Book of Exodus:

The phrase “I am” appears hundreds of times in the Bible — seven times it was uttered by Jesus to make the point that he was God incarnate. Blonde Girl #1’s demand for bodily autonomy recalls Satan’s comment when he rebelled against God using a series of “I will” statements, which were recorded in the book of Isaiah:

‘I will ascend into heaven,
I will exalt my throne above the stars of God;
I will also sit on the mount of the congregation
On the farthest sides of the north;
I will ascend above the heights of the clouds,
I will be like the Most High.’

She is who she is and she WILL get her abortions. I pray that she realizes the mortal peril she’s in before it’s too late.


At any rate, the little stunt at the church accomplished nothing beyond getting these girls’ faces all over social media. Mission accomplished, I guess. It won’t move the needle on the abortion debate, but at least they got their fifteen minutes of fame.

US inflation resumes rapid rise by accelerating in May

Police clear out pro-abortion activists outside SCOTUS justices’ homes (their chant was beyond ironic)...