The state-owned company said it had offered the RMT union a 5 per cent pay rise in a two-year deal which also included a promise of no compulsory redundancies.

The offer was contingent on members accepting far-reaching reforms, particularly for maintenance workers.

Negotiators for the RMT, which brought large parts of Britain’s railways to a standstill when its members went on strike for three days last month, said it would put the offer to its executive committee on Wednesday. If the committee accepts the deal, the offer would be put to members.

But in a sign it might not be enough for the union, the RMT said the Network Rail offer still amounted to a real terms pay cut, would involve cutting a third of frontline maintenance roles and was worse than deals agreed with some transport operators.

“Railway workers have lost thousands of pounds in earnings due to a pay freeze in recent years and they refuse to be short-changed again,” RMT boss Mick Lynch said.

The Network Rail offer included a 4 per cent pay rise in the first year, backdated to January, and 2 per cent the following year, with a further 2 per cent on offer that year if modernisation targets were met, as well as cash bonuses which would take the pay rises to around 5 per cent.

The public body said the lowest paid staff, deemed those earning under £30,000, would receive the biggest rises.

The RMT leadership had been pushing for pay rises of 7 to 8 per cent to compensate for inflation that is expected to hit 11 per cent in the autumn.

The union is still in separate negotiations with train operating companies in a similar dispute over pay, working practices and potential job losses. 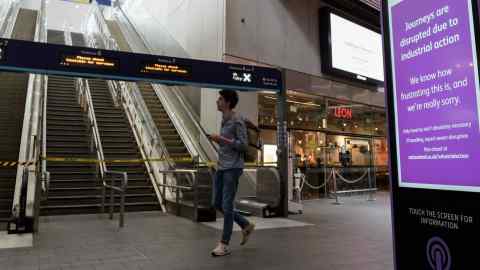 Staff at two other transport unions, Aslef and TSSA, have in recent days also backed industrial action without setting dates for walkouts, setting up the possibility of co-ordinated strikes at most train operators bringing the railways to a virtual standstill this summer.

The TSSA on Tuesday also said Network Rail had offered pay rises, but said they “don’t come close to what our members expect”.

The company offered pay rises of 3 per cent for management grades and 4 per cent for general staff, with the potential for more if “productivity targets” are met.

Only around 20 per cent of train services ran when RMT members went on strike in June, largely because there are few contingency plans to replace signallers.

Industry executives believe that strikes at train operating companies would be more manageable, except if drivers walked out, when there would be virtually no services on affected lines.

Mick Whelan, general secretary of drivers’ union Aslef, told the Financial Times last week that a strike by his members would cause “massive disruption”.

The pay offers from Network Rail are the first sign of a possible way out of the labour disputes that have gripped the railways in recent weeks.

“While money is extremely tight because of the railway’s financial troubles following the pandemic, we can afford to make this offer if our people accept change and compromise, which will fund it,” Network Rail said of the RMT offer.

Unions have called on the government, which sets the industry’s budgets, to become directly involved in the negotiations and offer more public money for pay rises.

Ministers have said the government has poured £16bn into the industry since the start of the pandemic, and sweeping reforms and modernisations were needed.

Saudi Arabia unveils concept video for environmentally-friendly ‘line city’ that some are calling a...