If the inevitable tradeoffs are ignored, most people would be in favor of getting a free lunch.

Unfortunately, there ain’t no such thing.

A new poll shows that President Joe Biden’s decision to forgive $10,000 in student loan debt for many individuals who borrowed money from the federal government to pay for college (and $20,000 for those with need-based Pell Grants) is broadly popular—as long as people don’t think about the scheme’s knock-on effects. Once the potential consequences—including higher inflation and rising college tuition costs, are taken into account—support for student debt forgiveness craters, even among self-identified Democrats.

“Support for cancelling federal student loan debt plummets when Americans consider its trade-offs,” writes Emily Ekins, director of polling for the libertarian Cato Institute, which published polling data on student debt forgiveness Thursday. The Cato/YouGov survey includes more than 2,300 Americans and was conducted over six days in mid-August, just prior to the White House’s August 24 announcement of the student loan forgiveness plan.

The results are striking. While 64 percent of respondents (and 88 percent of Democrats) back student loan forgiveness of $10,000 for individuals earning up to $150,000 annually, those totals fall significantly once potential consequences are introduced. 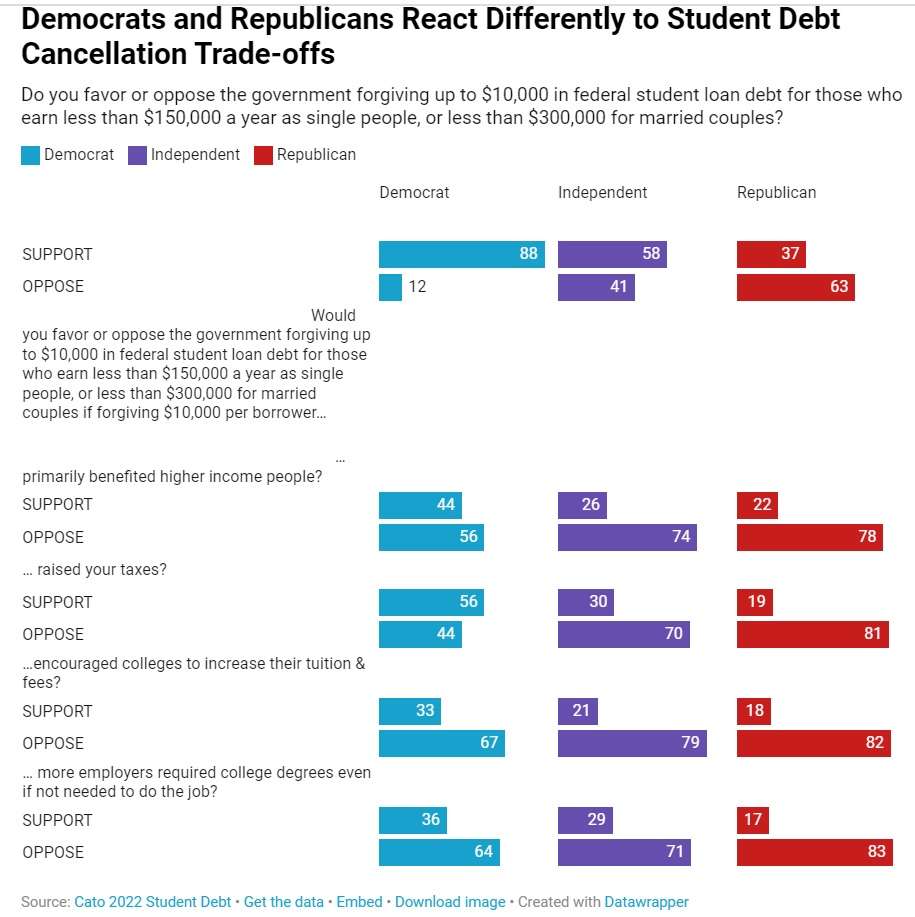 If student loan forgiveness means colleges will raise their prices, for example, support for the policy plummets to 25 percent overall (and 31 percent from Democrats).

But that’s probably the most obvious and inevitable consequence of forgiving student debt—and, more accurately, of Biden’s decision to change how student loan repayment plans will work in the future.

The new loan-repayment structure caps payments as a percentage of a borrower’s income, meaning that the amount borrowed above the cap becomes effectively meaningless. Colleges will be able to raise tuition to astronomical levels while telling students not to worry about the amount because what they owe in repayment will be capped.

As Reason‘s Robby Soave explained earlier this week, the White House has succeeded only in creating even stronger incentives for everyone involved in higher education to fleece students and taxpayers. Even lefty policy wonks like Matt Bruenig have quickly identified the flaws in this idea, which will likely force further government interventions in the near future.

What if student loan forgiveness also caused more employers to require a college degree, even for jobs that someone could do without spending four years studying various unrelated topics? When presented with that possibility, only 29 percent of respondents (and 36 percent of Democrats) in the Cato/YouGov poll say they would support Biden’s policy. Too bad, because that’s a likely outcome, too.

And what if most of the benefits of student debt forgiveness accrued to wealthier Americans? Then support for the policy falls to 32 percent overall and 44 percent among Democrats.

That’s inevitable too because the White House decided to make student loan forgiveness available to individuals earning up to $125,000 and couples earning up to $250,000.

Because the final version of Biden’s plan included larger amounts of debt cancellation for Pell Grant holders and the ongoing repayment caps, the distribution of benefits is not quite as skewed as it was when the Penn Wharton Budget Model analyzed the initial version of the proposal. Even so, a revised analysis shows that 62 percent of the benefits will flow to people in the upper 60 percent of incomes (those earning over $50,100 this year). Rather than being a leg up for the working class, this policy remains mostly a giveaway to upwardly mobile middle- and upper-middle-class Americans with college degrees.

The popularity, or lack thereof, of a policy is not indicative of its worthiness, of course. But it is hard to imagine the Biden administration pursuing a policy this legally and economically fraught if not for student debt relief’s popularity among the Democratic base.

That popularity, however, might be something of a mirage. “These data show that Americans don’t like the costs that many experts believe are associated with federal student loan forgiveness,” says Ekins.

None of this is surprising. More than three years ago, Quinnipiac identified a similar trend in a poll about student debt relief. In that survey, a majority supported the idea of giving $50,000 in debt relief to individuals from households making less than $250,000 annually, but a majority opposed the idea when told that higher taxes would be necessary to pay for it.

It’s not clear that there will be a direct tax increase necessary to pay for Biden’s student debt relief. Instead, the government will simply not collect some of the future revenue it expected to, which will add to the long-term budget deficit.