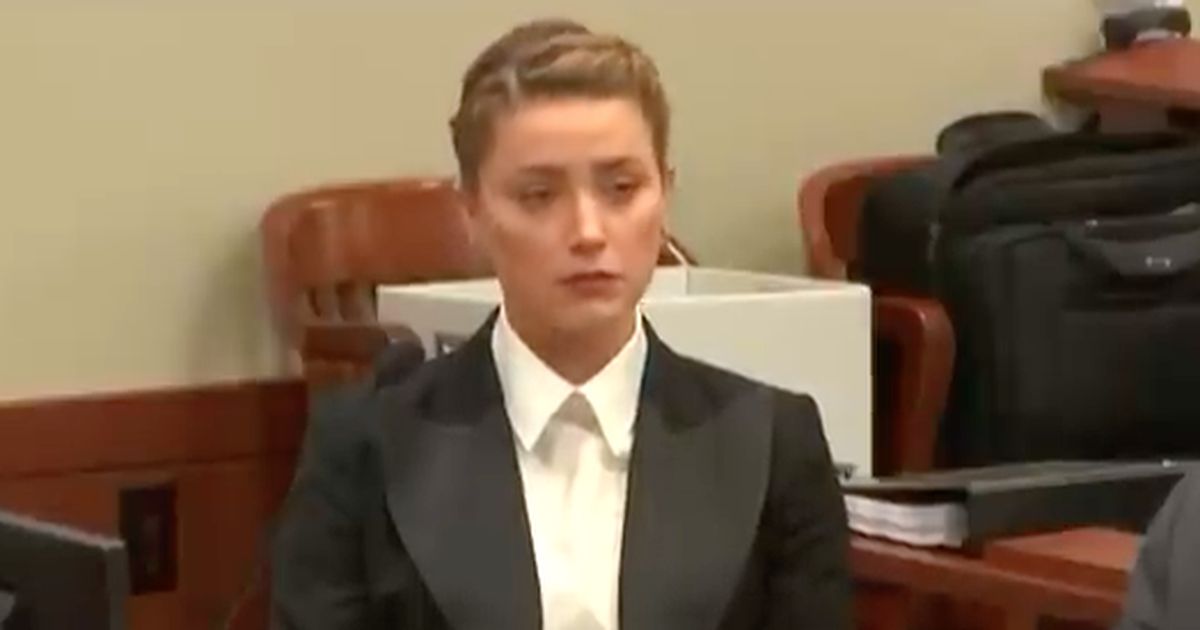 #MeToo activist and “Magic Mike XXL” actress Amber Heard, who is being sued for defamation by Johnny Depp, fired her PR team last Friday because the headlines were just too devastating to her defense, according to the NY Post.

Amber Heard is so upset over the coverage she’s been getting in her court battle with Johnny Depp that she abruptly switched to a new PR team ahead of her highly anticipated testimony this week, The Post has learned.

The “Aquaman” actress ditched crisis PR firm Precision Strategies on Thursday after getting frustrated with the press she’s received since her bombshell defamation trial kicked off last month, sources said.

Another source said Heard, 36, is “frustrated with her story not being told effectively.”

This new PR firm got started right away playing clean-up for Heard. Her new rep was seen in court on Tuesday using his phone in the courtroom and being chastised by bailiffs.

Bingo! Caught in 4K with time stamp.
Amber Heard’s creepy publicist used his phone while court was in session. pic.twitter.com/Et1SNsaoSo

But despite the new guy’s in-court faux pas, his media manipulation skills appear to be up to snuff. I’ve had the pleasure of seeing behind the scenes what public relations media do. A good PR manager has a Rolodex full of media contacts at big newspapers who they can call and coordinate a story with. Celebrities do it all the time. Most of the “news” you see about celebrities isn’t news at all but are “placed” marketing articles for publicity. Normally, they’re not harmful in any way and just serve the artist’s purposes of getting more attention. But sometimes it can get very dark. Let’s look at the headlines after today’s outrageous testimony by the paid expert hired by Heard’s team who put on a melodramatic show accusing Depp of outlandish acts like performing a “cavity search” on Heard. While this “witness” never actually witnessed anything, she was allowed to give her expert psychological opinion and repeat what Heard told her. The way she repeated it to the jury sounded like she was an eyewitness.


The way Dr. Dawn Hughes testified allowed the media to use the quotes as “witness statements” and claim in headlines that these things actually happened. The truth is that none of the allegations testified to have been corroborated by any eyewitness reports, medical records, or police records. The expert was repeating Heard’s allegations only. But let’s take a look at what Heard’s PR team has been able to do with that testimony.

The first set of photos shows all the positive headlines Heard got on Tuesday as a result of Dr. Hughes’s outlandish testimony. The second shows an article in Marca with the headline, “Therapist Confirms Johnny Depp Kicked Amber Heard Over Franco Affair,” which is positive for Heard’s defense. But if you click through to the story (which no one does) the article actually says, “However, she confirmed she wasn’t present in the event Amber Heard described,” so how could the event described be “confirmed” like the headline claims? The same article goes on to say, “not having direct eyewitnesses to all the ‘atrocities’ Depp perpetrated on Heard is highly convenient.” Convenient or an indication that none of it happened?

This headline is quite good for her because no one reads the actual articles. But if you go into it, the article itself is very bad for her (but no one will read it so it serves the purpose for her team) pic.twitter.com/2b2uHtthC0


But Heard’s team is doing its job, spreading fake news, using publications like Marca no one has ever heard of to spread these narratives around the world on behalf of paying clients. I tried to research the publication but was unable to even click on the “About” page because the site was reloading every time I tried. According to Wikipedia, Marca “is a Spanish national daily sport newspaper owned by Unidad Editorial.” The newspaper focuses primarily on football. On its English version it seems to focus mostly on sports but also has a small entertainment section. One big indicator that the Marca article was placed by PR is that it comes up in the top three Google search for “Amber Heard.” All it takes to do that is money. The real manipulation here seems to be the knowledge that they don’t expect anyone to read it. It’s the headlines that matter. Did they pay for that headline? Work out a deal with Marca? I would contact them to ask but I literally cannot click on the “contact us” hyperlink. I reached out to them on Twitter instead and asked if they’ve been communicating with Shane Communications on behalf of Amber Heard and will update if they reply.

Is that how you thought media worked or should work? In the coming days, expect to see more about Heard’s new crisis management team. Something tells me this guy isn’t going to be able to stay out of trouble.

The Tenn. GOP Removed Him From the Ballot, but Congressional Candidate Robby Starbuck Refuses...

Levin on Thanksgiving: No Thanks to Media, America Is a ‘Special Country’