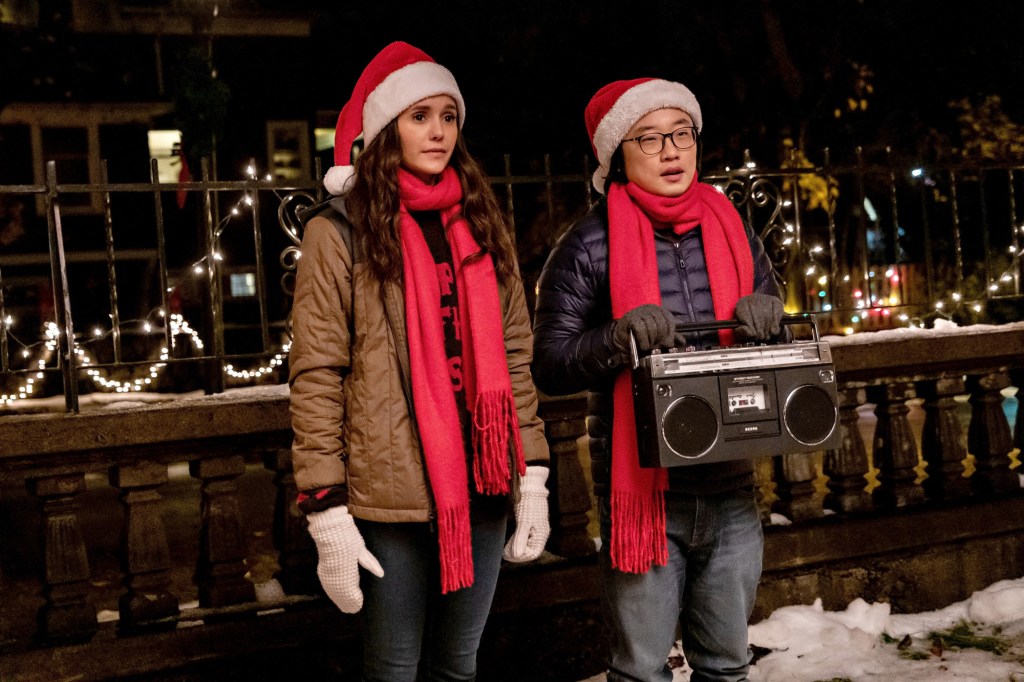 There’s a modicum of delight hidden within director Hernán Jiménez’s holiday-themed romantic comedy “Love Hard” — if audiences can get past the conceit that an attractive, self-respecting woman would be so desperate for a boyfriend that she’d stick around after a potential beau pulls a despicable deed by “catfishing” her. For those who find that completely implausible even by dumbed-down genre standards, the remainder is hard to love. The ensuing shenanigans not only do our heroine a massive disservice by letting men manipulate her agency — they also cause us to question what exactly we’re rooting for when the perky protagonist stoops to equally lowdown behavior.

Los Angeles journalist Natalie Bauer (Nina Dobrev) is searching for her soul mate in the online dating world, but failing spectacularly with local prospects. Her Flirt Alert app matches have tested her patience with men using outdated profile photos, standing her up completely and worse, cheating on their spouses. She remains unflappable, turning these disaster dates into fodder for a mega-popular column she writes under the sad-sack pseudonym “Always a Bridesmaid” at a trendy lifestyle website. Though her pieces please both readers and her douchey, demanding editor Lee (Matty Finochio), Natalie is growing tired of rejection. So at the encouragement of her bestie Kerry (Heather McMahan), she expands her search for true love country-wide. And just like that, she swipes right and matches 30-year-old Josh Lin.

From his profile, he appears to be the entire package — tall, handsome and outdoorsy. After two weeks of late-night calls, bonding over the intimate details of each other’s lives, Josh casually drops a hint that he wants Natalie to join him at his family home in Lake Placid, N.Y., for Christmas. Feeling like she knows him well enough, and with Lee desperately needing her to complete a new assignment, Natalie decides to hop on a plane and surprise her beau. However, when she arrives, she’s shocked to discover Josh isn’t who he said he was. He’s actually a short, shy, bespectacled introvert (Jimmy O. Yang) living in his parents’ basement. He used a picture of his best friend Tag (Darren Barnet) to lure Natalie into a romance. As a half-baked mea culpa, Josh strikes a deal with Natalie: If she stays for a week and pretends to be his girlfriend to make his family happy, he’ll help her win over Tag, thus finding her true love. Yet instead of cutting her losses and parting ways to write her next humiliating masterpiece, she agrees to stay and scheme.

Jiménez, along with screenwriters Danny Mackey and Rebecca Ewing, hit too many sour notes when attempting to soften Josh’s unforgivable betrayal. They rationalize his abhorrent behavior by explaining that a lack of self-confidence drove him to these extreme measures. They also give him a slight backstory involving being bullied by his spotlight-hogging, competitive older brother, Owen (Harry Shum Jr.), who demeans Josh as a disappointment to their kindhearted parents (James Saito and Rebecca Staab). Incidentally, his unhealthy brother issues are left mostly unresolved by film’s end. Bringing Natalie down to Josh’s level by deceiving Tag (i.e., fundamentally changing everything about herself to suit his dream-girl needs) serves to compound these problems, as neither of their scenarios is equal. But for the sake of the film, we’re forced to accept that they are. They’re both awful, beginning romantic relationships based on lies but to drastically varying degrees, with Josh’s duplicity trumping hers as the absolute worst.

Natalie’s journey toward becoming her honest self is severely muddled. It’s rare when she’s given the chance to demonstrate initiative. Men in her world are continually explaining the reality of situations to her, from her hypocrisy to her superficial dating habits. She seldom learns lessons on her own. They also keep rescuing her, whether it’s Josh taking her to the vet after an allergic reaction to a boozy beverage, the rock-climbing incident when Josh calms her fear of heights, or when Lee — not her best friend Kerry — arrives in the third act to get her to realize her true feelings about the real Josh.

Protesters Rally in Rome During G20

That’s not to say there are no redeeming values. There’s a tangible sweetness behind the notion of two imperfect people finding each other perfect. Though the troubling material doesn’t necessarily allow for the actors to turn in their best work, some of the ensemble frequently rise above it. Saito and Yang portray the touching, tender aspects of their underwritten father-son relationship with nuance and vulnerability. Skilled comedic performers Yang and Dobrev pack a lot of heart and humor into the scene where Natalie helps Josh improve his profile page.

Jiménez and company give the picture an innovative aesthetic sheen to augment characters’ emotions through camera movement, editing and subtle shifts in the cinematography. Jiménez , editor Priscilla Nedd-Friendly and cinematographer Shane Hurlbut take craft and care capturing character-driven sequences — like when Natalie and Josh put their own spin on “Baby It’s Cold Outside” as the camera swirls around them as if they’re the only two people there, or during the climactic chaos of their surprise engagement party when the camera turns upside down, symbolizing their lies doing the same.

If only similar ingenuity was applied to better reinforce the protagonists’ internal conflicts that directly inform their arcs. We’d be dealing with a well-earned, satisfying conclusion. As is, it cuts corners to achieve such a rush. With its prevailing sentiments on dating in the digital age feeling more than a decade old, and themes centered on honesty and shallowness ringing hollow, this feature is fairly forgettable.

The Pixel 6 and 6 Pro are impossible to ignore

45 Gifts That Will Have Your Best Friend ‘Literally Screaming’

Katie Holmes Has ‘Sworn Off Men’ For The Time Being In Order ‘To Concentrate...