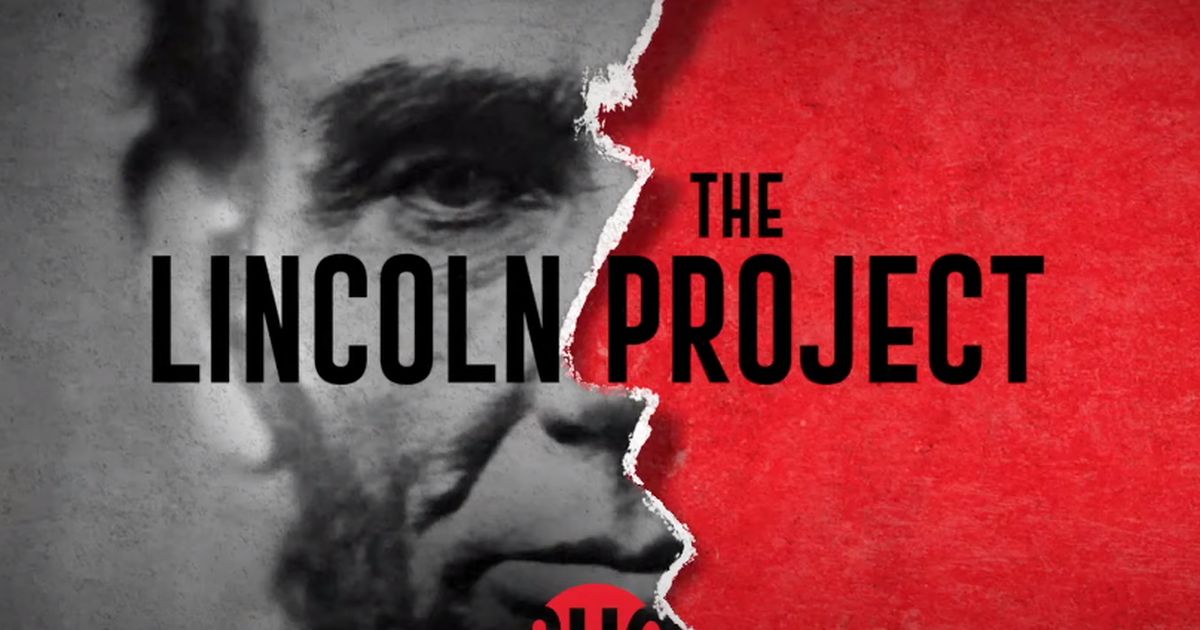 The Lincoln Project, as our regular readers know, is basically a money-grubbing Democrat front group. Not only is it opposed to Donald Trump, but to the very conservative values many of us hold dear. Now, the grifters are being featured in a new Showtime five-part docuseries entitled “The Lincoln Project.”


Showtime says the series “takes viewers inside the war rooms of the wildly successful SuperPAC of former elite Republican strategists and consultants who joined forces for the sole purpose of saving democracy by bringing down Donald Trump.” Well, that’s one way to describe an effort to take down not only Trump but the entire Republican Party, save the likes of Adam Kinzinger and Liz Cheney.

Last week the group tweeted a video of Kamala Harris complaining about Roe v. Wade being overturned, suggesting that abortion on demand is a constitutional right:

There has never been a more critical time to vote for pro-democracy candidates than right now. The Dobbs decisions was just the beginning. MAGA Republicans will chip away at our constitutional rights until there are none. pic.twitter.com/aF1m9GwObD

Mark Kelly is a patriot. A true public servant who will make Arizona and America proud. #AZSen pic.twitter.com/2EUIy1tyop

Things are looking better for Democrats these days, but they cannot let up on the gas. Dems must keep grinding & avoid complacency at all costs. They can pick out office curtains AFTER the midterms are won! @TheRickWilson gets into it on the latest pod: pic.twitter.com/1cIjZL8oM1

If you think you’ll be safe from the GOP’s tyranny by living in a blue state, think again.

The midterm election are in 56 more days. Make a plan. Show up. Check your registration status. Most of all, elect PRO-DEMOCRACY candidates that are devoted to preserving our democracy.

Honestly, these people are complete bores, aren’t they? Yet somehow, they’ve managed to rake in boatloads of money by pretending to be “reasonable” Republicans, the adults in the room, the saviors of “democracy” (which, in case you haven’t noticed, is a left-wing dog whistle used to denigrate our republican form of government). It’s been obvious since the Lincoln Project launched that the group had found a way to separate Democrats from their money by dumping on Republicans, the party they initially purported to want to “save.” The group has raked in an astounding $24 million since it launched in 2020.

For our VIP members: Lincoln Project Grifters Prove Just How Insane They Truly Are With This PUTRID D-Day Comparison

At least there’s some hope that the Showtime series will call out the corruption and sexual depravity surrounding some of the group’s most influential members. The network explains that “no one could have predicted the subsequent implosion as, plagued by scandals and secrets, the gunslingers turned on each other.” John Weaver, one of the group’s co-founders—and “mastermind” of John Kasich’s failed presidential bid—resigned in disgrace after dozens of young men accused him of offering to boost their careers in exchange for sex. Nothing says “conservative” like trying to diddle young men, amiright? Six of the eight original founders of the group eventually resigned and were replaced by another fleet consisting mostly of former GOP-hacks-turned Democrat apologists.


So what should we expect from the docuseries? Expect it to mostly portray the founders as defenders of liberty, a bulwark (see what I did there?) against Eeeevil Trump and his Eeeevil Followers. They’ll touch on the scandals, will claim that the group has reformed itself, and then circle back to the Lincoln Project’s heroic role in saving our “democracy.” The trailer shows a figure (cofounder Rick Wilson?) walking through the desert declaring that “Nobody cares” about the scandals. “They care what we’re going to do in 2022 and beyond.”

Indeed, the directors of the series described it in glowing terms in a statement:

There has never been a super PAC that has captured the imagination of the general public like the Lincoln Project. They showed us that you could use storytelling and the power of the internet to punch back, and that you could fight a bully by bringing the fight right to their doorstep. Like the best verité documentary journeys we had no idea where this story would take us, and we hope in presenting this all-American tale of redemption, power and betrayals, that viewers can be entertained and galvanized to be more active in protecting the foundations of American democracy at a time when it is more fragile than ever.

I suppose there’s a small chance the show will call them out for the grifters they are, but seeing as they are hoovering up mad stacks of cash—and using it to support Democrat causes—don’t hold your breath for an accurate portrayal. We’ll most likely see a puff piece highlighting their “heroic” work. Democrats will fawn over it and donate more money to the group’s overflowing coffers. Lather, rinse, repeat. The series will begin streaming on Showtime on Oct. 7— conveniently premiering a month before the midterms.


Putin’s War. Week 21. New Weapons Change the Battlefield in Ukraine’s Favor but Are They Stronger Than European Cowardice and Stupidity? – RedState

Wray Torched On Twitter For Scolding Americans Critical Of FBI