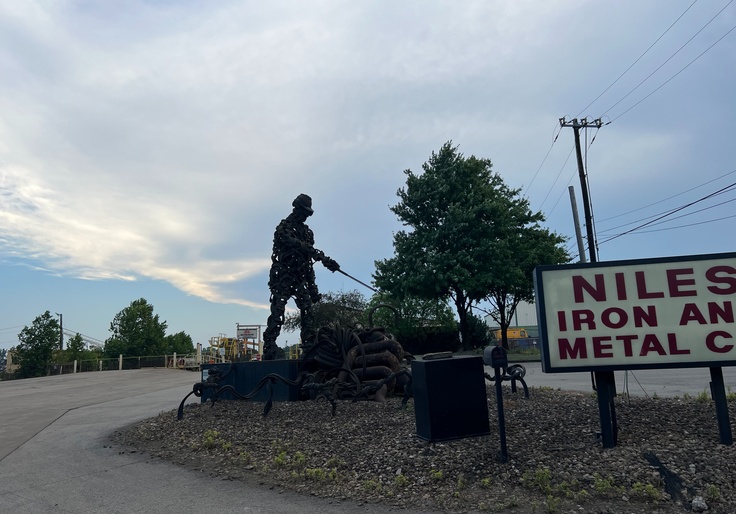 NILES, Ohio—Tim Ryan’s old street in east Ohio is a progressive oasis in a working-class town suffering from deindustrialization and the opioid crisis. Rather than the American flags seen on lawns just a few streets over, several of the 3,000-square-foot-plus homes on North Rhodes Avenue sport pride banners.

Carl Mymo, a retired forklift driver who lives just two blocks from where Ryan did, said those living on the conspicuously wealthier avenue in Niles don’t care about the same issues as the rest of the town, such as skyrocketing gas prices. “They can afford it,” Mymo said.

“This is all Democrat, this neighborhood,” said Mymo, a lifelong Democrat until this year when he changed his registration, as he pointed to larger homes in the distance. “I was a Democrat but started voting Republican on everything after Trump. I don’t like Ryan at all no more. I used to like him, but to me he’s just a regular politician now.”

Mymo’s description was familiar to others who spoke with the Washington Free Beacon in Niles, where Ryan lived until 2013. Several residents remarked on the town’s golden years when large corporations such as General Electric employed thousands of people in-town or nearby. Those golden years corresponded with overwhelming Democratic Party support, and are the reason Ryan’s seat was safe for decades.

That’s not the case anymore. Many of those companies are now gone, as are the jobs. One out of four jobs in Trumbull County, where Niles sits, disappeared from 2000 to 2016. And Ryan is gone as well. He moved just north to Howland after purchasing a 4,300-square-foot McMansion with his wife. A real estate listing from before the sale describes the home as “beauty on a private cul-de-sac” with a three-car garage and granite countertops in the kitchen. His new town’s median income is roughly 50 percent higher than Niles, according to U.S. Census data.

Ryan’s campaign did not respond to an interview request.

Ryan’s Senate campaign message for voters in Ohio is simple: He’ll bring factory jobs home from abroad. In a video announcing his candidacy for the Senate seat occupied by the retiring Republican senator Rob Portman, Ryan toured an abandoned factory in Niles.

“China is out-manufacturing us left and right and it’s time we fight back,” Ryan says in another ad. “We’ve got to go all in and it starts by investing in Ohio workers.”

But for many voters living in Niles, that line is getting stale. For 20 years Ryan has served in Congress passing no bills except a handful to rename federal buildings. Few of those factory jobs have come back.

“I don’t think he’s done a lot for the area,” said Sarah Smith, a nurse at a hospital in neighboring Warren. “I don’t think he’s ever had a regular job. When General Motors left, he says he did a lot to try and stop that, but it was too late. He gets on the bandwagon too late.”

That Ryan is jumping on the protectionist bandwagon is a criticism often lobbed by his Republican opponent, J.D. Vance. In June, Ryan wrote a letter to President Joe Biden demanding he not remove tariffs against China. Almost four years earlier, however, he criticized Trump’s anti-free trade agenda “designed to inflict maximum damage on the U.S. economy, for minimum gain.”

Now Ryan says he always “agreed with Trump on trade.” His massive $9 million campaign war chest, the majority of which has come from out-of-state donors, has funded ad blitzes across Ohio. Almost every ad features references to China and none to the Democratic Party. (Smith said she found Ryan’s commercials the most annoying thing about his campaign. “China, China, China. Come on.”)

Ryan’s attempts to distance himself from the Democratic Party are most obvious when he revels in the occasional compliment from Fox News. Earlier this month, Ryan released an ad featuring years-old clips from Fox hosts noting his opposition to the far left on such issues as open borders.

Yet Ryan’s strategy of cherry-picking praise from conservatives comes with a tremendous caveat: His voting record. Ryan votes with Biden 100 percent of the time in Congress—exceeding his FiveThirtyEight-predicted voting record by more than 30 points.

Why Ryan behaves in Congress the way he does while pitching himself on the campaign trail as a flexible moderate is a bit of a mystery to the voters in Niles. If it were 1998, or even 2008, such a voting record wouldn’t be a surprise. Trumbull County went blue by 22 points in 2008, and again in 2012.

“Basically Niles voted Democrat no matter who ran. It used to be if you were a Republican, you couldn’t get elected around here no matter what,” said Dave Sherman, who works in IT for a nearby steel company and intends to vote for Vance. “I voted Democrat until my early 50s. My dad was a Democrat, he was a union guy. But I think a lot of people here who aren’t talking are going to vote for J.D., there’s just a loud minority for Ryan.”

Trump carried Trumbull County by more than 6 points in 2016 and more than 10 points in 2020. The county’s recent voting history makes it more red than Ohio as a whole, which favored Trump in 2016 and 2020 by around 8 points.

The effect of Trump on northeast Ohio can’t be overstated. Outside of cities, this Ohio region used to be one of the bluest in the country. Trump was the first Republican to win the neighboring Mahoning County since 1972.

Even Ryan’s supporters in Niles such as Carla Dean, a retired school teacher who knows the Ryans personally, say the area’s politics aren’t what they used to be. Speaking with the Free Beacon on her front lawn, Dean sighed and pointed at her neighbor’s home.

“He’s huge. Trump is huge. [My neighbor] flies the [Trump] flag,” she said. “I don’t even speak politics at all with him because I’m afraid.”

How Vance performs in November without Trump on the ticket will be a test for whether Republicans can hold their gains in the rustbelt. A major asset for Vance is that the only politician with a higher name ID in Niles than Ryan may be Biden. The voters unfamiliar with Vance know one thing: They’re unhappy with the president.

Ryan is acutely aware of this fact. When Biden came to Cleveland earlier this month, where some Trumbull County residents commute to for work, Ryan conveniently scheduled campaign stops in the state hundreds of miles away. A Morning Consult poll recently found Biden’s approval rating 23 points underwater in Ohio.

“I don’t know who I’m gonna be voting for,” said Michelle Yuri, a registered Democrat who works as a packer at the printing company Pubco, when asked about Vance. “I don’t agree with our president, let’s just say that.”

The Tattoo Conspiracy – The New American

Manchin-Schumer Deal Vote Is In – RedState