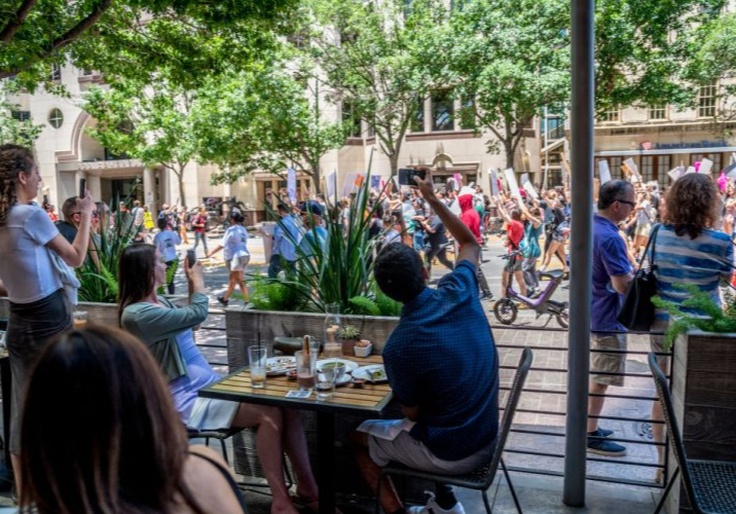 They planned a Women’s March-caliber mobilization to observe the one-month anniversary of the Texas Heartbeat Act in October. They scheduled dozens of rallies and protests across the state, banking on a popular uprising to buoy progressives to success in next year’s statewide elections, much as the Women’s March presaged the Democratic wave in 2018.

Everything was going their way. But hardly anyone showed up.

“No one” is an overstatement, but only just. The Austin American-Statesman’s initial report on a rally at the statehouse modestly referred to “hundreds” of attendees, accurate as far as this reporter could tell. The paper updated its story the following day: “An earlier version of this story underestimated the crowd size at the Capitol rally Saturday,” an editor’s note blared, now announcing that “thousands” had shown up.

The city itself hinted that turnout would be sparse. Austin is an oasis of “let your freak flag fly” left-libertarianism. LGBT pride banners and Black Lives Matter placards are standard at honky tonks, coffee shops, even motels. Pro-choice paraphernalia was notably absent, even in the days and weeks immediately following implementation of the Heartbeat Act.

Texas’s experience suggests that overturning Roe v. Wade will not prove to be a seismic political event, at least as far as election outcomes are concerned. The muted reaction to the Texas Heartbeat Act, the beginning of the end of abortion in Texas, only emboldened pro-life elements across the state.

“The sun rose as usual. Life went on. And there was not a tsunami of opposition to that law,” said Joe Pojman, Ph.D., an aerospace engineer who now leads the Texas Alliance for Life.

Pojman told the Washington Free Beacon that his group viewed the Heartbeat Act’s enactment as a “dress rehearsal” for the possibility that Roe would be overturned, which came to pass in June. The ensuing weeks gave them a chance to fine-tune talking points and assess reaction from coalition partners.

The following months were all the more encouraging, Pojman told the Free Beacon. The alliance endorsed dozens of candidates in Republican primaries across the state, he said, and he did not detect any reticence or hesitancy from Republican lawmakers, an assessment shared by other Texas Republicans the Free Beacon interviewed.

“People running for office all up and down the ballot cannot be pro-life enough in the Republican primary,” Pojman told the Free Beacon. “Our PAC interviewed dozens of candidates for Congress, the state house, and statewide elected office. It’s amazing. Virtually everyone is more pro-life than Mother Teresa.”

For the past 10 months, Texas has tested the post-Roe political landscape. In that span, the political environment changed only slightly, with abortion a low salience issue that was neither a handicap to Republicans nor a boon to Democrats.

That the Heartbeat Act was so quickly eclipsed may be a function of the immigration crisis. Rep. Chip Roy (R., Texas), who represents Texas’s ruby red hill country, said border security tops the list of priority issues for his constituents.

“Voters are concerned about wide open borders, fentanyl pouring into their communities, cartels being empowered, crime on our streets—all the interconnectivity of that—such that they feel Texas is not as safe as it used to be,” Roy told the Free Beacon. Abortion, on the other hand, seldom comes up with constituents, he said.

Even in Democratic primaries, abortion got little play. And where it was especially relevant, the more pro-abortion candidates lost.

Jessica Cisneros failed for the second time to unseat Rep. Henry Cuellar (D., Texas), a moderate Democrat from south Texas and the only member of his conference to vote against a sweeping abortion rights bill Democrats crafted in 2021. Beyond codifying Roe, the bill would have prohibited common restrictions on the procedure like waiting periods and allowed termination even after fetal viability in certain cases.

Cisneros made abortion a centerpiece of her challenge, but she fell short by several hundred votes, a testament to the complex abortion politics of the working class and heavily Catholic border region.

Similarly, state senator Eddie Lucio, a pro-life Democrat from Brownsville who is retiring after three decades in the legislature, saw his favored successor prevail in the Democratic primary in May. The candidate, Morgan LaMantia, is pro-choice, but fended off rivals further to her left on a range of issues.

If the results in south Texas are an object lesson in nuance, Texas gubernatorial nominee Robert Francis “Beto” O’Rourke (D.) has yet to heed it.

The Heartbeat Act heightened the contradictions of the O’Rourke campaign. In stretches, O’Rourke can deliver well-honed critiques that elide partisan valence. He’ll needle Abbott for poor stewardship of the state’s uneven power grid, or champion broadband access for vast, remote stretches of south and west Texas. Yet he seemingly can’t resist pandering to the online left, as when he crashed a press conference on the Uvalde school shooting featuring many Republican functionaries. And he’s made abortion a marquee issue of his campaign, promising a regime of liberal abortion access backed with taxpayer dollars.

“These have been among the darkest of days to be an American—even more so if you live in the state of Texas,” O’Rourke said while stumping on July 9 in the panhandle, the most conservative part of the state.

O’Rourke’s calculus may rest on a distinction—his campaign declined to comment for this story. The Heartbeat Act gave hints, a forecast, but nothing could approximate the gravity of overturning Roe v. Wade. Lean in. If the abortion gambit will help his campaign, there’s scant evidence as yet. Abbott has a 5 to 8 point lead over the Democrat according to four separate June surveys. The Cook Political Report has Abbott as a favorite for reelection, ranking the race “Likely R.”

And the Heartbeat Act is good law for only a while longer—an outright ban on the procedure will take effect later this summer.

So Now Biden Wants to Make Nice With the Saudis?

US Attorney’s Office decides it will not prosecute Stephen Colbert’s crew for unlawful entry...