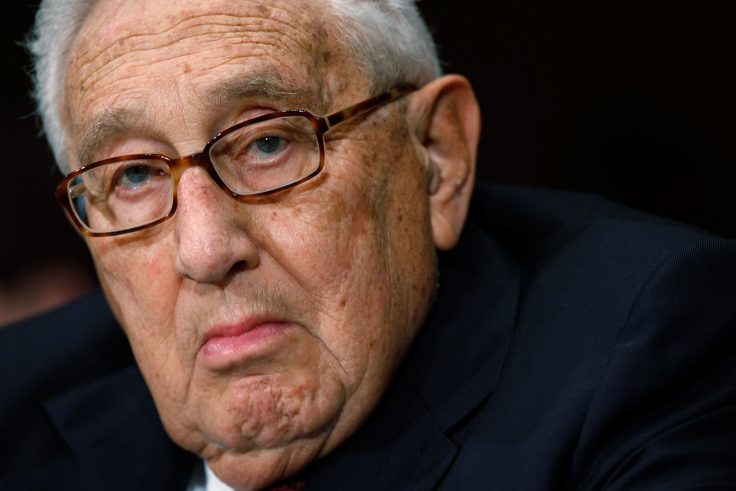 “Statesmen are not called upon only to settle easy questions,” wrote Winston Churchill in The Gathering Storm. “It is where the balance quivers, and the proportions are veiled in mist, that the opportunity for world-saving decisions presents itself.”

Ever since he was a graduate student at Harvard, Henry Kissinger has been profoundly interested in the quivering balances and mist-veiled proportions that call for great leaders. His first book, A World Restored (originally his doctoral dissertation), ends with an essay on the difference between “the Statesman,” on the one hand, and two kinds of revolutionary, on the other: “the Conqueror” and “the Prophet.”

Kissinger preferred the statesman. “[T]he claims of the prophet,” he wrote, “are a counsel of perfection, and perfection implies uniformity. [But] utopias are not achieved except by a process of leveling and dislocation … [while] to rely entirely on the moral purity of an individual is to abandon the possibility of restraint.”

The statesman, by contrast, “must remain forever suspicious of these efforts, not because he enjoys the pettiness of manipulation, but because he must be prepared for the worst contingency.” The statesman’s tragedy, the young Kissinger argued, is that he will always be in the minority, for “it is not balance which inspires men but universality, not security but immortality.” People yearn for transcendence; that is what makes them susceptible to prophets.

A World Restored was published in 1957. Now, 65 years later, Kissinger returns to the subject of leadership. At 99, he is one of the last remaining representatives of a generation of leaders whose statesmanship was forged in the furnace of World War II, a furnace ignited by history’s most dreadful conqueror-prophet. It is not hard to see what made the young Kissinger—a refugee from Hitler who returned to a devastated Germany as a G.I.—so wary of both prophets and transcendence. Yet experience has taught him that the most successful leaders need to combine elements of both the statesman and the prophet.

In Leadership, Kissinger presents us with six beautifully crafted miniatures of leaders he came to know and admire, who in their different ways exemplified great leadership. His sextet—Konrad Adenauer, Charles de Gaulle, Richard Nixon, Anwar Sādāt, Lee Kuan Yew, and Margaret Thatcher—might seem a motley group, not least because Nixon’s career ended in disgrace and Sādāt’s in assassination. Yet Kissinger convinces the reader that they were “akin in their commitment to securing a new purpose for their respective societies and in each case seeking to relate that purpose to a meaningful tradition.”

The gnarled Rhinelander; the aloof Frenchman; the devious Californian; the heroic Egyptian; the visionary Chinese; and the indomitable Englishwoman—all six, Kissinger points out, came from modest backgrounds. They had a faith in the values of their inherited culture, but also an idea of where their people could be led, and the courage to try to get them there. Less obviously, they were tellers of hard truths. At times they were divisive; at times isolated.

As Europe is once again battered by the storm of war, it is good to be reminded of what Adenauer and de Gaulle contributed to the reconstruction of the continent after 1945. Neither would be surprised, I suspect, by Russia’s reemergence as a threat to European peace. Adenauer would probably blame his successors for pursuing Ostpolitik—the policy of building closer economic and political ties between Germany and Russia—to the point of dependence and impotence. De Gaulle would doubtless see the war in Ukraine as partly the result of Anglo-American duplicity or naïveté or both.

It is also good to recall Thatcher’s extraordinary conviction and courage, qualities her admirer and probable successor as prime minister, Liz Truss, is going to need. Especially in time of war, when the Argentine junta invaded the Falklands, Thatcher was magnificent. The same could not be said of her cabinet, as Kissinger discovered when he visited London during the war.

“Over tea at 10 Downing Street,” he recalls, “I asked Thatcher which of the new approaches [toward the Argentines] she favored. ‘I will have no compromise!’ she thundered, ‘How can you, my old friend? How can you say these things?’ She was so irate I did not have the heart to explain that the idea was not mine but her chief diplomat’s”—the foreign secretary Francis Pym. (As Kissinger points out, there was in fact a moment when Thatcher was willing to contemplate a compromise brokered by the United States and the U.N. Fortunately for her, the other side foolishly rejected it.)

Kissinger’s portrait of de Gaulle is the most striking of the chapters in this illuminating book. “De Gaulle defined his goals in the visionary mode of the prophet,” he writes, “but his execution was in the mode of the statesman, steely and calculating.” That steeliness was the result of years of self-discipline. Kissinger quotes de Gaulle’s diary from his time as a German prisoner of war in World War I: “Dominating oneself ought to become a sort of habit, a moral reflex acquired by a constant gymnastic of the will especially in the tiniest things: dress, conversation, the way one thinks.”

Here is de Gaulle again in 1932: “Aloofness, character, and the personification of greatness, these qualities … surround … those who are prepared to carry a burden which is too heavy for lesser mortals. The price they have to pay for leadership is unceasing self-discipline, the constant taking of risks, and a perpetual inner struggle. The degree of suffering involved varies according to the temperament of the individual; but it is bound to be no less tormenting than the hair shirt of the penitent.” It is hard to imagine any of today’s leaders writing such words. We know now that de Gaulle had a warm and tender heart: His devotion to his daughter Anne, who had Down syndrome, testifies to that. But he trained himself, like some medieval penitent, to conceal his private self altogether because he believed that only a man of iron could restore France.

‘Breaking History’ For No Good Reason

What place, then, does Richard Nixon have in such a volume? Few people spent more time with Nixon during his presidency than Kissinger. Not for the first time, he makes the case that Nixon’s foreign policy achieved great things: ending war in Vietnam, limiting the arms race with the Soviet Union, opening to China, laying the foundations of peace between Egypt and Israel. Not for the first time, Kissinger portrays Watergate not as the high crime for which Nixon would have been impeached had he not resigned, but as a succession of lapses and blunders—echoing Bryce Harlow’s explanation for the debacle: “Some damn fool got into the Oval Office and did what he was told.”

The scale of the challenge that Nixon faced when he entered the White House in January 1969 was certainly immense. And, while he could not salvage much, if anything, from the morass in Vietnam bequeathed to him by his predecessors, Nixon did a remarkable amount to lay the foundations of the world order we know today. He was also almost as big a self-disciplinarian as de Gaulle, working tirelessly with his yellow pads and telephones to try to stay ahead in what he liked to call “the game.” Yet it all ended in ignominy. “All political careers end in failure,” the British Conservative Enoch Powell famously observed. But few end in such abject failure as Nixon’s.

At Kissinger’s last meeting with Adenauer in Bonn in 1967, the ancient German chancellor asked: “Are any leaders still able to conduct a genuine long-range policy? Is true leadership still possible today?” It is strange to find that question being asked nearly 60 years ago, as we constantly ask it today. Kissinger concludes this volume with some speculative answers to the question of where all the Adenauers have gone. Is it that our societies have become less meritocratic? Can it be connected to the decline of deep literacy and the rise of the Internet? In contemporary politics, Kissinger notes, “Anger has replaced dialogue as a way to carry out disputes, and disagreement has become a clash of cultures.”

Perhaps in such an environment there is little serious chance for someone who combines the tactical skill of the statesman with the strategic vision of the prophet. If that is so, then we are in trouble. As Churchill rightly said, it is “where the balance quivers, and the proportions are veiled in mist” that we need inspired and inspiring leadership. Having seen such leadership more than once at close quarters, Kissinger can at least tell us—with a crystal clarity that belies his years—what we should be looking for.

Niall Ferguson is the Milbank Family senior fellow at the Hoover Institution, Stanford, and author of Kissinger, 1923-1968: The Idealist (Penguin).