The IMF is preparing to lower its growth forecasts for the global economy this year and next amid rising inflation and commodity price shocks driven by Russia’s invasion of Ukraine.

“Recent indicators imply a weak second quarter — and we will be projecting a further downgrade to global growth for both 2022 and 2023 in our World Economic Outlook Update later this month,” said Kristalina Georgieva, managing director of the IMF, in a blog post published on Wednesday.

In April, the IMF predicted global growth of 3.6 per cent for this year and next — downgraded from the January estimates of 4.4 per cent and 3.8 per cent respectively — and warned of potential downside risks.

Georgieva said several of these risks had materialised, with commodity price shocks driven by the Ukraine war creating a “cost of living crisis” that was “only getting worse”.

The estimates for global growth are the lowest since the first wave of the coronavirus pandemic.

The IMF’s move comes amid a mounting fear that the global economic outlook is darkening. Germany, Europe’s largest economy, is facing the prospect of severe gas shortages this winter with energy prices already spiking.

A further “disruption in the natural gas supply to Europe” could trigger a “global energy crisis” and “plunge many economies into recession” said Georgieva.

Commodity price shocks have fed into rising inflation, which has triggered a near universal tightening cycle by global central banks. While the IMF is of the view that “acting now” to curb inflation “will hurt less than acting later”, further rate rises are likely to damp growth and employment around the world.

Markets have already started to coalesce around the idea that a global recession may be more likely than first thought, with broad declines recorded in a range of commodity markets last week as investors bet that higher borrowing costs would start weighing significantly on demand.

Tightening monetary conditions are of particular concern to emerging markets, as rising rates in developed countries results in capital outflows and increases the cost of borrowing from foreign investors.

Sovereign bond yields for foreign-currency denominated debt are sitting at more than 10 per cent in about a third of emerging economies. This is “close to the highs last seen after the global financial crisis” said Georgieva. 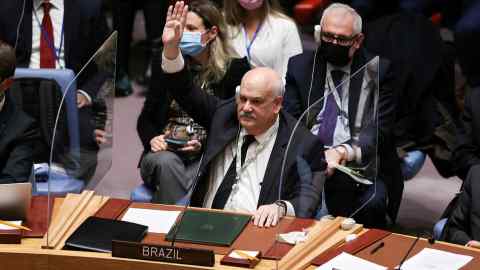 Georgieva encouraged policymakers to stand ready with “foreign exchange interventions or “capital flow management measures” in addition to “pre-emptively reducing reliance on foreign currency borrowing” to get everyone “safely to the other side of this tightening cycle” and avoid a debt crisis in emerging markets.

War-driven increases to essential goods are also beginning to weigh on the poorest nations and threatening to push an additional 71mn people into extreme poverty. Without action and support from advanced economies, this will lead to further “hunger, malnutrition and migration” said Georgieva.

The IMF managing director warned that “risks of social instability” were increasing and called for more global co-operation to address the scale and interrelated nature of the challenges facing the global economy.