The suspect in the Ohio rape case, Gerson Fuentes, who is charged with raping a 10-year-old child whose story was used to push a pro-abortion narrative, has deeper pockets than one would expect for an illegal alien from Guatemala who reportedly worked at a coffee shop.

Eviction paperwork was filed by Sawmill Crossing, the company that owns the building where Fuentes and his reported “wife” Lourdes Gomez live with the victim and other children. Townhall’s Mia Cathell posted the court filing on Monday to Twitter.

PJ Media reached out to the counsel for Sawmill, who confirmed that the reason for the eviction is criminal activity based on the arrest of Fuentes for the rape of the child. Gomez’s counsel, Aneca Lasley, a partner at the prestigious Ice Miller law firm, worked out a deal so Gomez could voluntarily move out and be taken off the eviction. It is believed that she has moved out of the building on Dumont Lane, presumably with the children still in her care.

EXCLUSIVE: Mother of the 10-year-old Ohio girl has an EVICTION HEARING for participating in CRIMINAL ACTIVITY on the property where she housed her baby daddy, 27-year-old illegal alien Gerson Fuentes, who’s accused of repeatedly raping & impregnating her daughter at the address. pic.twitter.com/JazqmBoy9z

Franklin County has been unwilling to confirm if the children in Gomez and Fuentes’s care were removed by the state despite many attempts by PJ Media and other news agencies to confirm that the state followed the Ohio sex abuse protocols. The county claims “privacy” for the children and refuses to answer the basic question that would ease concerned citizens’ minds: Are the children no longer in the care of the people who oversaw the abuse? Gomez defended Fuentes to Telemundo reporters, saying he was innocent. DNA from Fuentes matched the DNA of the aborted fetus.


According to Fuentes’s rental agreement, no children were listed on the paperwork, which is required by Sawmill Crossing to keep track of occupancy. A witness saw Gomez and Fuentes move in with two boys around the ages of 10 to 12 in December of 2021. There was no report of a female child between the ages of 8 or 9 with them at the time. One of the property employees, who wants to remain anonymous, said he never saw any female child with the couple who rented the apartment on Dumont Lane for $1264 per month, which is not subsidized.

Fuentes, a Guatemalan citizen, is being represented in his criminal case by Bryan Bowen of Luftman Heck & Associates, another private law firm that is well known in Columbus. Luftman Heck & Associates doesn’t do public defense, according to sources in the legal community there. Defense attorneys aren’t cheap. It’s possible Bowen took on the case pro-bono, but unlikely. It’s much more likely that Fuentes or someone else is footing a very large legal bill.

PJ Media was able to obtain Fuentes’s ID card issued by the Guatemalan consulate. It’s interesting that Americans are required to show state ID for many things, but Fuentes was able to rent an apartment and build a life with nothing but this. 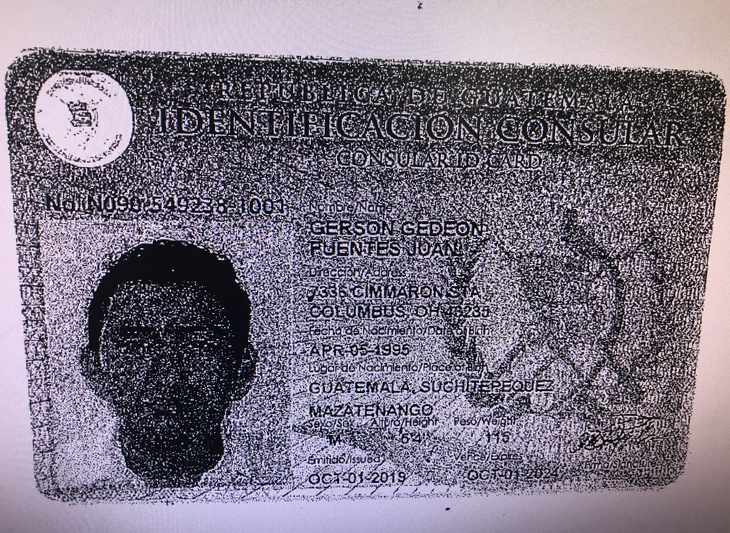 How does a guy like Fuentes—with a job at a cafe—afford a $1,264 rent payment and several attorneys? What does Fuentes really do? Is he getting help from other sources? Are the children even related to either Fuentes or Gomez? Has anyone investigated this? Has a child-trafficking unit looked into it? Why are Columbus law enforcement and government agencies so unwilling to ease the public’s fears about this case?

Ice Miller is a very well-known firm, and the idea that Gomez, who speaks no English and has police records for not having a valid ID and not paying fines, doesn’t seem to be the kind of person who would have access to the type of money it takes to hire a partner at such a firm. How did she do it? Who is paying for it?

Aneca Lasley, voted one of Columbus Ohio’s top 25 “superlawyers” by Cleveland Magazine in 2022, once defended Planned Parenthood when she worked with Squire Sanders.

PJ Media discovered a lawsuit called Bray v. Planned Parenthood in which Lasley was one of the defense attorneys on behalf of the abortion giant. Is it a coincidence that likely illegal alien Lourdes Gomez just happened to get a lawyer connected to Planned Parenthood after Planned Parenthood activist and abortion doctor Caitlin Bernard used the woman’s daughter as the poster child for abortion on demand in a post-Roe media campaign? Who is paying for Gomez’s high-powered attorney?

The eviction of Fuentes is scheduled for Aug. 23, 2022, at the Franklin County courthouse.

At 75, India is finally ready to join the global party