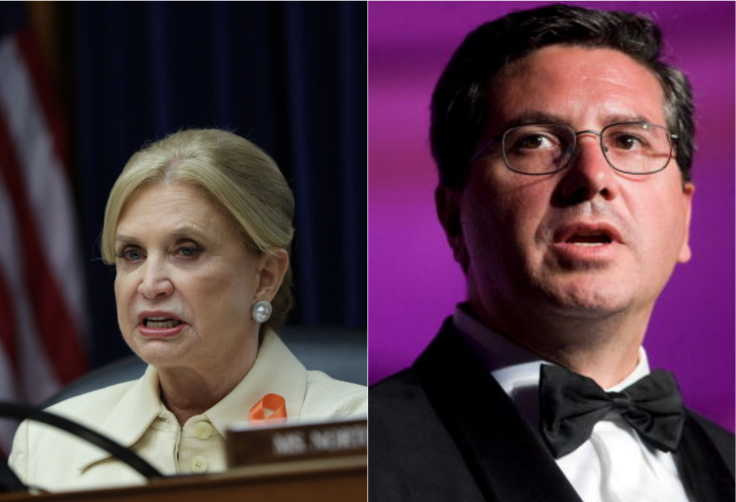 House Democrats have ramped up their investigation of the Washington Commanders football team and owner Dan Snyder, relying on a familiar “Me Too” playbook to do it.

Reps. Carolyn Maloney (D., N.Y.) and Raja Krishnamoorthi (D., Ill.) have invited Snyder and NFL commissioner Roger Goodell to testify before the House Oversight and Government Reform Committee on June 22 as part of their sprawling probe into the football team. Democrats opened the investigation last year after the NFL fined the team $10 million for workplace harassment issues. The probe has expanded to include sexual misconduct allegations against Snyder himself and an inspection of the Commanders’ finances.

Democrats’ case is based on testimony from former Commanders employees represented by Debra Katz and Lisa Banks, the activist lawyers who represented Christine Blasey Ford, the woman who made unfounded allegations against Supreme Court justice Brett Kavanaugh. Democratic lobbyists long opposed to Snyder have also pushed the lawmakers to investigate the Commanders. Last month, they organized a fundraiser for Krishnamoorthi, who they said offered the best shot at “getting rid of Snyder.” The lobbyists, Andy and Mike Manatos, also have close ties to President Joe Biden. A powerhouse Democratic consulting firm founded by Biden adviser Anita Dunn is also representing former Commanders employees.

The confluence of activists and lobbyists has all the makings of an orchestrated smear campaign, critics of the investigation claim.

“Running a coordinated political hit job with professional Democratic operatives is a complete perversion of Congress,” said Rick Manning, president of Americans for Limited Government. “By attempting a hostile takeover of an NFL team through a partisan committee, Maloney and Krishnamoorthi are exceeding their authority and corrupting the congressional investigation process.”

Republicans on the committee—as well as supporters of the team—have questioned why Congress is investigating the workplace issues of a private business in the first place. The Oversight Committee is tasked with investigating waste, fraud, and abuse in the federal government. The committee also has no power to punish the Commanders or the NFL even if it finds wrongdoing.

“It’s an obvious distraction for them to not have to talk about their record,” said Republican pollster John Rogers. A former executive director of the National Republican Congressional Committee, Rogers said voters he has polled are concerned about inflation, gas prices, and the baby formula shortage. Not a single person Rogers has interviewed has identified the Commanders as an important issue.

“They talk about anything other than their record,” Rogers said. “Here we are 10 months into spending taxpayer dollars investigating the organizational culture of a football team.”

Democrats’ motives for the investigation has been a source of speculation. Taking down Snyder would have the dual benefit of helping the “Me Too” cause while hurting a major Republican donor. Snyder contributed $100,000 to the Trump Victory Fund in 2017 and has given $203,900 to the Republican National Committee since 2005, according to campaign finance records.

Democrats have pressured the NFL and Commanders to release a report completed last year that detailed incidents of bullying, harassment, and a toxic workplace culture, especially for the team’s female employees. The NFL levied a $10 million fine against the franchise, then known as the Washington Football Team. Maloney and Krishnamoorthi announced an investigation on Oct. 21, calling on the league and the team to release the report. They escalated the probe in February, hosting a roundtable discussion where a former Commanders employee, Tiffani Johnston, leveled misconduct allegations against Snyder. She said Snyder “made unwanted sexual advances toward her at an unspecified work dinner” in 2005 or 2006.

A former coworker of Johnston’s, Jason Friedman, wrote in a letter to the committee that he “witnessed Dan Snyder grab the arm of [his] coworker, Tiffani Johnston, and attempt to pull her into his limousine.”

Friedman testified weeks later that Snyder and the Commanders kept ticket revenue, prompting Democrats to issue a letter to the Federal Trade Commission.

Snyder has denied the allegations, and the Commanders have questioned the motives of Friedman. On April 18, the Commanders submitted a letter to the Federal Trade Commission, disputing Friedman’s allegations with affidavits signed by four former team officials. The team also said that Friedman was fired “for professional misconduct” in October 2020. In addition to “abuse behavior” that led to his termination, Friedman had a “lengthy sexual relationship” with an intern 15 years his junior.

The Commanders have shown they are also easily swayed by political pressure.

Snyder changed the team’s name from the Redskins under political pressure from activists. On Friday, the team fined defensive coordinator Jack Del Rio $100,000 after he questioned the Jan. 6th committee’s investigation.

Yellen urges Congress to do more to fight inflation