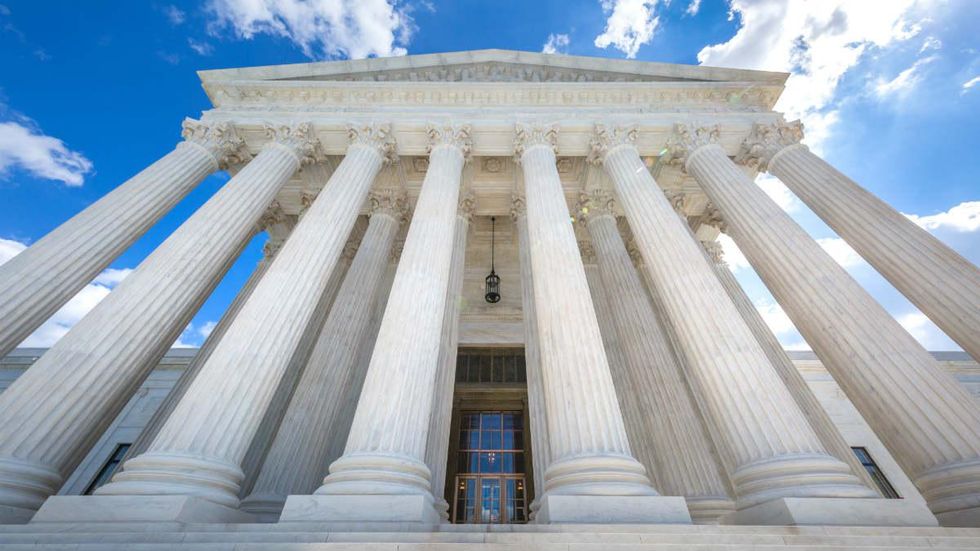 There’s a monthly invasion of hundreds of thousands of illegal aliens, deadly drugs, gang members, and unknowns crossing our border, and it has now become clear that nothing at the federal level will stop it. It’s now or never for the state governments. Waiting for a Republican president two and a half years from now is not the solution. Rather than waiting helplessly until 2025 for someone like a potential President Ron DeSantis to solve the problem, all the GOP governors should follow his example as governor in deterring illegal immigration.

Believe it or not, the president can’t just thwart our sovereignty laws and invite people in to remain in the country indefinitely pending an immigration court hearing. Yet Justice Kavanaugh joined Chief Justice Roberts and the liberals in upholding the Biden administration’s decision to abolish Trump’s policy of making illegal aliens return to Mexico while petitioning for entry into the country.

Biden v. Texas, which involved the state of Texas suing the DHS for flooding the state with illegals, was not just about continuing the policies of a predecessor. Obviously, a president doesn’t have to maintain the executive orders of the prior president – unless your name is Trump and you are actually enforcing immigration law, in which case the same Supreme Court on numerous occasions made him continue Obama’s amnesty programs. This case, however, is about the plain meaning of the law.

The Immigration and Nationality Act (INA) (8 U. S. C. §1225(b)(2)(A)) states plainly that if anyone is caught coming over our border “not clearly and beyond a doubt entitled to be admitted,” the individual “shall be detained for a [removal] proceeding.” And no, just because the entire world claims bogus asylum, it doesn’t mean they get to remain indefinitely pending the adjudication of their claims. The same statute (§1225(b)(1)(B)(ii)) makes it clear that the asylum petitioner “shall be detained for further consideration of the application for asylum.”

The court majority attempts to get around this by ignoring the main statute and focusing on §1225(b)(2)(C), which deals with returning aliens to their country of origin and states that the DHS “may” return them. As such, the court ruled that clearly Biden doesn’t have to return aliens to Mexico because that Trump-era policy was optional. But there’s one problem: The same law states that the DHS “shall” either not allow them to enter or must detain them. One way of fulfilling that dictate is to return them to Mexico. If Biden doesn’t want to do that, he is welcome to detain them. “But it’s not feasible to detain millions of people,” he will suggest. Exactly! So, then he has no other choice but to return them in order to keep within the letter and spirit of the law, which reflects a core sovereignty interest of the states and the people. Yet he’s released so many that even the detention space we have is empty in some facilities.

Moreover, the fact that there are exponentially more aliens than detention space is prima facie proof that this is not about asylum at all, but a carte blanche invasion. So, the Supreme Court used one word of one statute in isolation to render the entire letter, spirit, and goal of the INA obsolete.

Justice Alito, in his dissent, offered the perfect analogy for what would happen if a private citizen read the law the way the Biden administration is abusing the INA:

Here is one more example. A State that operates its own motor vehicle inspection facilities has a law that says that every vehicle “shall” be inspected every year. The law also says that motorists “may” have their vehicles inspected at a licensed private garage. A motorist fails to have his car inspected because he must work during the time when the state facility is open and would be fired if he took time off. This motorist also declines to have his car inspected at a private garage that is open during his off hours because the law says only that he “may” use such a facility. Would the motorist escape a citation?

Well, the same principle should apply here. How can the federal government get away with violating the core social compact it has with the states and the people? One of the core tenets of just government we celebrate this week by commemorating the signing of the Declaration of Independence is that all government power must flow from the “consent of the governed.” This implies jurisdictional and political sovereignty in the sense that no outside forces not controlled by the members of that society may determine the destiny of the society. Millions of foreign nationals cannot unilaterally assert jurisdiction, drain our resources, obtain citizenship against our will for their children, and then be counted in the census and distort our representation.

All signs point to states taking the lead in the face of the federal betrayal of this contract. Florida Governor DeSantis has taken the lead by, among other ideas, convening a grand jury to investigate who in Florida is involved in the smuggling operations that have brought millions of illegal aliens, along with so much criminal activity, into the country. The Florida Supreme Court recently agreed to impanel a statewide grand jury to investigate the scope of the problem, which could eventually lead to prosecutions of those involved.

Jessica Vaughan of the Center for Immigration Studies, who has worked on interior immigration enforcement for over three decades, believes that this example, if followed in other states, could deter the flow of trafficking or at least divert them to blue states.

“This criminal infrastructure includes the coyotes, who bring the illegal migrants over under the protection of the cartels, but also a vast and well-organized network of stash houses, transportation carriers, identity fraud rings, illegal labor contractors, money launderers, and even charities who assist the migrants along the way,” explained Vaughan. “What is happening is not a benign, humanitarian process; it is a dangerous, exploitative system that undermines our sovereignty, not to mention imposes enormous economic and fiscal costs on American communities. This grand jury will be able to expose just how ugly this system is, and it will be in a position to disrupt what is happening, potentially through criminal prosecutions.”

Vaughan notes that obviously Florida can’t single-handedly stop illegal immigration, but it will likely deter smugglers from using Florida to operate. “If the smuggling organizations and their associates are successfully disrupted in Florida, they will decide to work elsewhere. We should all pay attention to how this plays out. Over time this could potentially set a new standard for state action to deflect the impact of federal policies’ failures.”

Then, of course, there are the border states. Arizona and Texas must simply begin removing illegal aliens themselves. Kinney County Sheriff Brad Coe should serve as an example for the state officials in those border states. He caught four illegal aliens in a busy smuggling corridor in the Del Rio Sector, but border agents refused to take custody of them. So he drove them an hour away to the international bridge at Eagle Pass in his own sheriff’s van. “So, I can’t let them walk the streets. I can’t say, ‘Hey, go, be free.’ Because I still have to protect the Constitution and protect the people in the county.”

The Biden White House shares a timely reminder of what ‘every single Republican in...

FirstFT: Alibaba and Yum China first up for US regulators’ audit checks