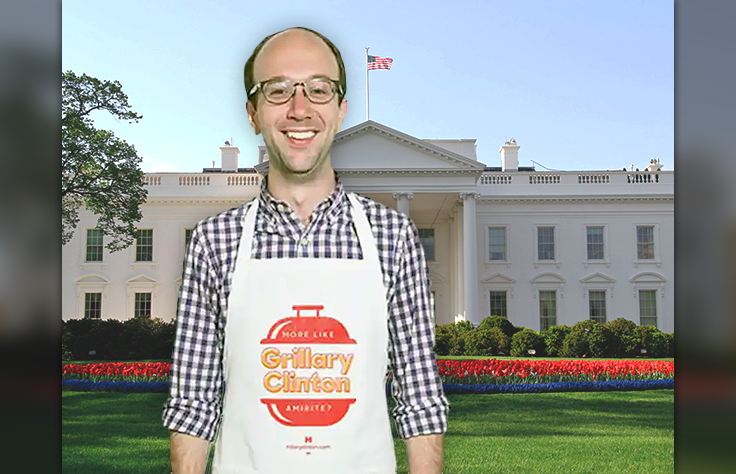 The Democratic operative best known for modeling a “Grillary Clinton” apron during the 2016 presidential campaign has been promoted again, the Washington Free Beacon has learned.

Ian Sams, sometimes referred to as the “Forrest Gump of political failure,” started his new gig in May. It comes with a fancy double-barreled job title: special assistant to the president and senior adviser to the White House counsel. His influence continues to grow despite a dubious track record. If history is any indication, Sams’s promotion is bad news for the Biden administration, which is struggling to contain its disarray ahead of an inevitable shellacking in the 2022 midterms.

Prior to assuming his current role, Sams was a “senior leader on the Biden administration’s COVID-19 response team” at the Department of Health and Human Services. Alas, the administration’s handling of the virus, which Biden emphatically promised to “shut down” if elected, has been rather bad. The president has now presided over more than 600,000 American deaths from COVID.

Before that, Sams was the national press secretary for Kamala Harris’s failed presidential campaign in 2020. At times it appeared as though the comms guru went out of his way to embarrass himself and his boss. In October 2019, for example, Sams lashed out after BuzzFeed News editor Katherine Miller posted some mild criticism of Harris on Twitter, the popular social networking website.

“This kind of stuff is just a really horrible look for you guys,” Sams texted Miller’s boss, BuzzFeed News editor in chief Ben Smith. “Frankly, it’s whiteness manifest.” Smith, who published the exchange, correctly assessed the absurdity of the situation. “Do you seriously not have real problems?” he replied. “This text makes me think you are totally, totally unready for an actual presidential campaign.” (Fact check: He was totally, totally unready.)

Just days later, Sams posted an inexplicably stupid photoshopped image of Harris taking the place of then-president Donald Trump getting scolded by House Speaker Nancy Pelosi (D., Calif.) during a Cabinet meeting. “Time for an upgrade,” he quipped. The post was widely mocked for being childish and incoherent. Sams ultimately deleted the tweet, complaining that “right-wing Twitter is a really sad place.”

It wasn’t the first time Sams played a senior role on a failed campaign. He was the communications director for Tom Perriello’s unsuccessful bid for the Democratic gubernatorial nomination in Virginia. Perriello lost the primary to Ralph Northam. The campaign’s inability to take Northam out by uncovering the racially charged scandals in his past will go down in history as one of the worst opposition research failures in American politics.

The Great Mysteries of 2022

Before that, Sams was a regional communications director for Hillary Clinton’s presidential campaign in 2016. Of the five states in his portfolio—Colorado, Florida, Ohio, Pennsylvania, and Virginia—his candidate won just two in what was perhaps the most humiliating political defeat in American history. Sams became a figure of middling notoriety during the campaign after modeling the $30 “Grillary Clinton” apron.

Sams joined the Clinton campaign after a failed stint as regional press secretary for the Democratic National Committee during the 2014 midterm elections, when the Republican Party solidified its control of Congress by winning 9 seats in the Senate and 13 in the House. In his current role as White House adviser, Sams will likely preside over yet another midterm disaster for Democrats.

He is what some elite liberals might describe as a “mediocre white man” who keeps failing upward. Sams is joined in the White House by Jake Sullivan, a so-called wunderkind who has presided over numerous foreign policy disasters dating back to the Barack Obama administration.

Congrats on the new gig!

Rep. McCarthy: America must back the blue all year round

LIVE: Protesters Gather at Supreme Court Ahead of Expected Rulings

White House to provide additional $450M in aid to Ukraine