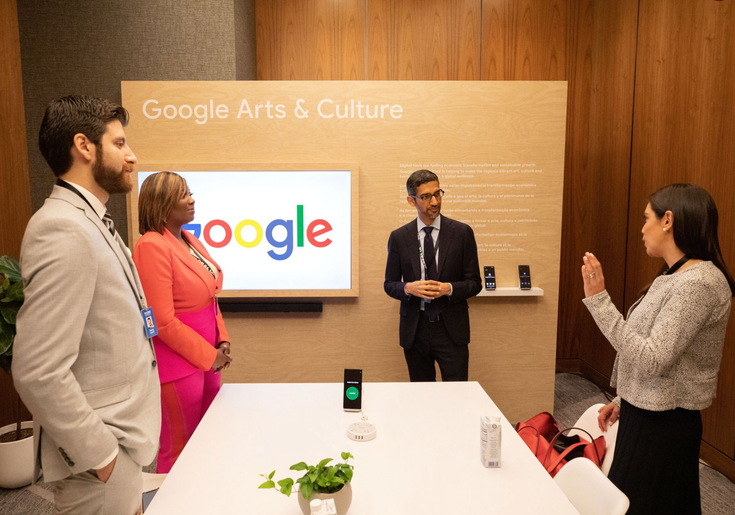 Google is setting strict caps on the number of white and Asian students that universities can nominate for a prestigious fellowship program, a policy legal experts say likely violates civil rights law and could threaten the federal funding of nearly every elite university in the United States.

The Google Ph.D. Fellowship, which gives promising computer scientists nearly $100,000, allows each participating university—a group that includes most elite schools—to nominate four Ph.D. students annually. “If a university chooses to nominate more than two students,” Google says, “the third and fourth nominees must self-identify as a woman, Black / African descent, Hispanic / Latino / Latinx, Indigenous, and/or a person with a disability.”

That criterion, which an archived webpage shows has been in place since at least April 2020, is almost certainly illegal, civil rights lawyers told the Washington Free Beacon—both for Google and the universities.

“It is illegal for Google to enter into contracts based on race under the Civil Rights Act of 1866,” said Adam Mortara, the lead trial lawyer for the plaintiffs in Students for Fair Admissions v. Harvard, who are pressing the Supreme Court to outlaw affirmative action. “And it is illegal for universities receiving federal funds to nominate students based on race under Title VI of the 1964 Civil Rights Act.”

That means nearly every top school in the United States could be at risk of losing its federal funding. Since Google’s discriminatory rule went into effect, a long list of universities has nominated students for the fellowship: Harvard, Yale, Stanford,  Princeton, the Massachusetts Institute of Technology, Columbia, Cornell, Duke, Johns Hopkins, the University of Pennsylvania, the University of Michigan, the University of North Carolina Chapel Hill, the University of California Berkeley, and New York University.

Those schools also have their own policies banning discrimination by race, gender, or disability—the three categories on which Google requires them to base fellowship nominations.

“The Google Fellowship program is a blatantly unlawful and immoral quota plan that pits students against one another by skin color and ethnic heritage,” said Edward Blum, the founder of Students for Fair Admissions. “Our nation’s enduring civil rights laws were passed to specifically forbid this type of racial discrimination.”

The fellowship shows how racial quotas, when sanctioned by a sufficiently powerful corporate actor, can metastasize and multiply across institutions. It also shows how private companies can circumvent Congress and federal law through a kind of bribery, providing a financial reward for illegal discrimination.

The bet, Morenoff added, is that “the feds won’t notice, won’t care, or won’t actually force the schools to choose between federal funding and Google’s.”

That assumption reflects the race-conscious consensus that has captured both private and public bureaucracies. Uber Eats in 2020 waived delivery fees for black-owned restaurants, only to scrap the policy after a lawsuit. In 2021, NASDAQ mandated racial quotas for all companies listed on its exchange, a rule now being challenged in the Fifth Circuit. And from New York to Utah to Minnesota, state public health departments have allocated scarce COVID-19 drugs based on race—even after lawyers informed them that their allocation schemes were illegal.

Those plans, like Google’s fellowship criteria, were all posted on public websites. No effort was made to hide them, suggesting that race-discriminaton—against certain groups, at least—is now the norm for many professionals.

It is also the norm at many universities, some of which explicitly advertise the Google fellowship’s diversity criteria to students. In an August 16 email encouraging all computer science Ph.D.’s to apply for the fellowship, New York University said it would not nominate more than two white or Asian males, “in order to increase opportunities for students who are underrepresented in the field of computing.” Duke University includes the same language on its “Research Funding” website.

Contacted about these concerns, New York University appeared to backtrack. “The language used in the internal announcement was not NYU’s but rather was drawn from the FAQ that Google posted about the Fellowship program,” a spokesman, John Beckman, told the Free Beacon, adding that “we are reviewing the language in the announcement.”

The participating universities may be violating as many as three different civil rights laws, not just Title VI. If schools are nominating people for a fellowship, Morenoff said, courts might treat them as employment agencies under Title VII of the 1964 Civil Rights Act, which prohibits discrimination in employment. State civil rights laws, which are often more exacting than federal statutes, pose a separate challenge. New York’s Human Rights Law, Morenoff said, is the most broadly written antidiscrimination law in the United States, and almost certainly bars universities from nominating students based on race.

That said, it would take a lot for universities to lose federal funding—a punishment of last resort under Title VI—over the fellowship. It could, however, open universities to civil rights investigations, Morenoff said, as well as to lawsuits from private parties. Universities usually blink in the face of such pressure. Harvard, for example, rescinded a ban on nominating members of single-gender clubs for the Rhodes scholarship after a 2019 lawsuit alleged that the policy violated Title IX.

Google’s legal problems are just as extensive as the universities’. Mortara, Morenoff, and another lawyer said that the fellowship’s racial caps likely violate the 1886 Civil Right Act, the law that bans contracting on the basis of race. Because it imposes requirements on students as well as Google—for example, that students remain enrolled in a Ph.D. program for the duration of the fellowship—courts would probably consider it a contract.

“Might Google have some defense? It’s possible,” Morenoff said. “But on its face, this is a violation of our oldest civil rights enactment.”

In addition, Google may be violating Title VII, whose ban on employment discrimination extends to employment training programs. The fellowship could be considered such a program, Morenoff said: Though fellows are not employed by Google, they are paired with a “Google mentor” and encouraged to apply for internships with the company. California state law, Morenoff added, also prohibits discrimination in employment training programs.

In response to a detailed inquiry about these legal concerns, Google defended the nominating criteria and denied that it was breaking the law.

“Like many companies, we actively encourage a broad range of individuals to apply to our PhD Fellowship program in order to attract the widest and most representative pool of applicants possible—this follows all relevant laws and is extremely common to do,” a Google spokesperson said. “Selection for the fellowships”—that is, selection from the pool of nominees, not the nomination process itself—”is not based on demographics in any way.”

This is not the first time Google has pushed the envelope with its diversity initiatives. The company’s former head of diversity,  Kamau Bobb, was reassigned in June of 2021 in the wake of a Free Beacon report that revealed his history of anti-Semitic comments, including that “Jews have an insatiable appetite for war.” Around the same time, Google told employees in a series of diversity trainings that “America is a system of white supremacy” in which everyone is “raised to be racist” and that “colorblindness” is “covert white supremacy.”

In 2017, the company also fired a programmer, James Damore, after he questioned Google’s diversity policies in an internal memo. The memo—”Google’s Ideological Echo Chamber”—proposed ways “to increase women’s representation in tech without resorting to discrimination,” a practice Damore called “unfair, divisive, and bad for businesses.”

Google’s diversity quotas extend beyond the United States. The Ph.D. Fellowship recruits students from across the world, with different nominating criteria for each region. Universities in East Asia and Europe, which are only allowed three nominations each, do not have to worry about race or disability. But gender is another story.

“If a university chooses to nominate more than two students,” the rules for Asia and Europe read, “the third nominee must self-identify as a woman.”

US economy will slow but recession not inevitable, says Janet Yellen