This article is an on-site version of our Disrupted Times newsletter. Sign up here to get the newsletter sent straight to your inbox three times a week

The UK faces a deeper and longer downturn than many expected, setting back living standards for at least two years.

That’s the view of new CBI chief Brian McBride who tells the FT in his first interview since taking the helm of Britain’s biggest employers’ group that the country’s businesses face an uphill battle to cushion consumers from a cost of living crisis that could be as damaging to the economy as the pandemic.

McBride’s comments cap a week of miserable news on the state of the British economy.

On Wednesday, Bank of England governor Andrew Bailey told assembled central bankers that UK inflation — which hit 9.1 in May and is forecast by the BoE to pass 11 per cent in the autumn — would stay higher for longer than in other comparable economies thanks to unique pressures such as the government’s energy price cap and the country’s tight labour market, a situation exacerbated by Brexit.

The effect of withdrawal from the EU was also highlighted in yesterday’s trade data, showing Britain’s performance in the first quarter falling to its worst level on record, thanks to weak export performance and a surge in imports.

Exports have been falling since 2021 when the UK left the EU single market and new border regimes were introduced. Brussels (unsurprisingly) reiterates the point, but Downing Street remains reluctant to order an economic impact assessment of the withdrawal.

FT survey: How are you handling higher inflation?

We are exploring the impact of rising living costs on people around the world and want to hear from readers about what you are doing to combat costs. Tell us via a short survey.

The ripping up of post-Brexit trading arrangements for Northern Ireland has also caused alarm. This is “a time for economics, not politics,” was McBride’s response. You can read more here from political editor George Parker and economics editor Chris Giles on how the true extent of the damage from Brexit is becoming clearer as the effects of the pandemic are disentangled.

The PMI reading for UK manufacturing meanwhile was confirmed today at a two-year low of 52.8 in June, down from 54.6 in May, where 50 marks the divide between expansion and contraction.

The cost of living squeeze was also highlighted today by new data showing UK mortgage rates rising at their fastest pace in a decade and figures yesterday showing record numbers of workers paying higher rates of income tax after the government decision to freeze thresholds for four years.

Some workers, such as those at Barclays, have been handed pay rises to help them cope, while others are turning to industrial action to secure pay rises to keep up with rising prices.

“People’s costs [and] living standards are absolutely going to go backwards over the next year or two, without a doubt,” says the CBI’s McBride. “For individuals and for businesses, we are in for a tough time.”

The FT is running a survey on the cost of living squeeze — how are you coping with higher prices? For more, click here.

Need to know: the economy

Eurozone inflation rose more than expected in a June to a new record high of 8.6 per cent from 8.1 per cent in May, as food (up 42 per cent) and energy prices rocketed. Excluding these two volatile items, core inflation slowed slightly from 3.8 per cent to 3.7 per cent.

Latest for the UK and Europe

Employment agencies hit out at the UK government’s plans to allow outside workers to replace staff on strike as the summer of discontent continued. Employees at BT, the UK’s largest telecoms group, became the latest to signal strike action — the first such move in 35 years. Talks to prevent further rail strikes were said to be “constructive”.

The withdrawal of Russian troops from Snake Island in the Black Sea could open up a path to ship grain out of Ukraine. The UN is leading four-way talks with Turkey to end the blockade of ports which has shut off export routes and threatened to cause a famine in Middle East and African nations that rely on Ukraine’s wheat and corn.

Our Big Read examines the future of Hong Kong on the day China’s president Xi Jinping visited the city to mark 25 years since the handover from the UK. Xi said the territory would stick with its “capitalist system” but must be governed by patriots as he swore in new leader John Lee.

Israel is set for its fifth election in less than four years after the governing coalition collapsed, crippled by a series of defections. November’s poll could see the return of former prime minister Benjamin Netanyahu, even as he fights against charges of fraud and bribe-taking.

CPI in Sri Lankan capital Colombo passed 54 per cent in June, moving into the realms of hyperinflation (defined as above 50 per cent), as the island nation battled a foreign currency crisis that has led to protests and fuel shortages. Food prices have risen by more than 80 per cent.

US stocks have recorded their worst first half in more than 50 years following the Federal Reserve’s attempts to curb inflation and concerns over global growth. The S&P 500 fell 0.9 per cent yesterday, leaving the blue-chip index down by 20.6 per cent in the first six months of 2022. Corporate fundraising has also cooled sharply. Chinese stocks on the other hand were set for their biggest monthly gain in almost two years

A surge in megadeals meant global mergers and acquisition volumes hit $2tn in the first half of this year, despite the backdrop of high inflation, rising interest rates and the Ukraine war. There have been 25 deals worth more than $10bn, up 12 per cent on last year, although overall deal volume fell by a fifth.

Vladimir Putin ordered the transfer of all rights to the Sakhalin-2 natural gas project to a Russian entity, the first time the Kremlin has nationalised a company since multinationals announced plans to withdraw from the country. The move could force foreign investors including Shell, Mitsubishi and Mitsui to walk away from the project.

Shares in Gazprom, the Russian state-backed gas group, fell 25 per cent yesterday after its dividend was blocked by investors. The company has cut gas supplies to European customers, including Germany’s Uniper, which was forced to issue a profit warning and start talks with the government about a bailout.

Citigroup is talking to Russian buyers over the sale of its local operations, making it the first big foreign bank to quit the country since Russia’s invasion of Ukraine. A UK parliamentary report hit out at the government’s “lack of willingness” to tackle Russian money laundering.

The EU reached a landmark deal to regulate trading of crypto assets to rein in the “wild west” of financial markets. FT reporters analyse the global measures taken to ensure crypto carnage does not infect mainstream finance.

Oxford BioMedica agreed a new three-year contract with AstraZeneca to manufacture Covid-19 vaccines if the UK drugmaker presses on with mass production of the jab.

New Omicron variants drove a 34 per cent jump in Covid infections in England in a week, according to new data today. The virus is spreading fast but existing immunity is protecting most people from developing severe infections, with the numbers requiring intensive care remaining at low levels. 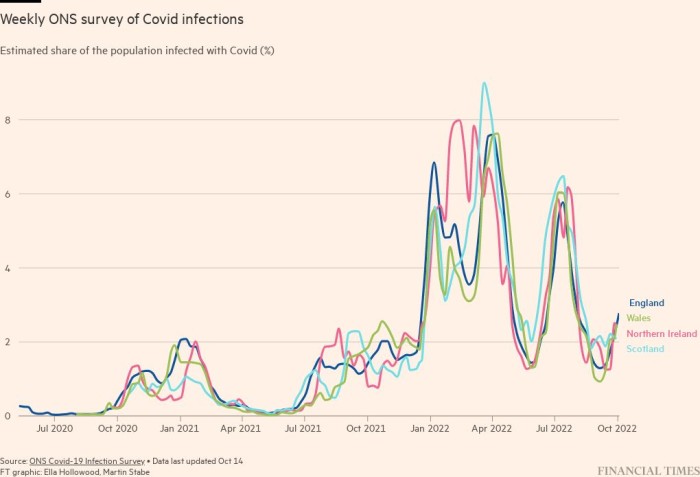 How worried should we be about these new variants? FT science editor Clive Cookson and global pharma correspondent Hannah Kuchler answered your questions about rising cases and vaccine efficiency.

US government advisers recommended changing the design of Covid-19 vaccines to target the Omicron variant, which is expected to lead to a surge in infections in the autumn.

A new study showed that taking a break from immune suppression treatments would improve the response to Covid jabs for millions of people.

BioNTech/Pfizer said new data had showed its Omicron-targeted jabs had produced a strong immune response and were a significant improvement on their previous vaccine.

Science commentator Anjana Ahuja draws parallels between the fight against monkeypox and the second-rate status afforded the global south in the quest for Covid vaccines.

Get the latest worldwide picture with our vaccine tracker

Ever felt guilty about the air miles clocked up by the food in your weekly shop? Check out the climate footprint of the items in your basket with our new interactive tool.

FT Asset Management — The inside story on the movers and shakers behind a multitrillion-dollar industry. Sign up here

Thanks for reading Disrupted Times. If this newsletter has been forwarded to you, please sign up here to receive future issues. And please share your feedback with us at disruptedtimes@ft.com. Thank you

Blue-check suggests a $5,000 a gun buyback for three months, no questions asked –...