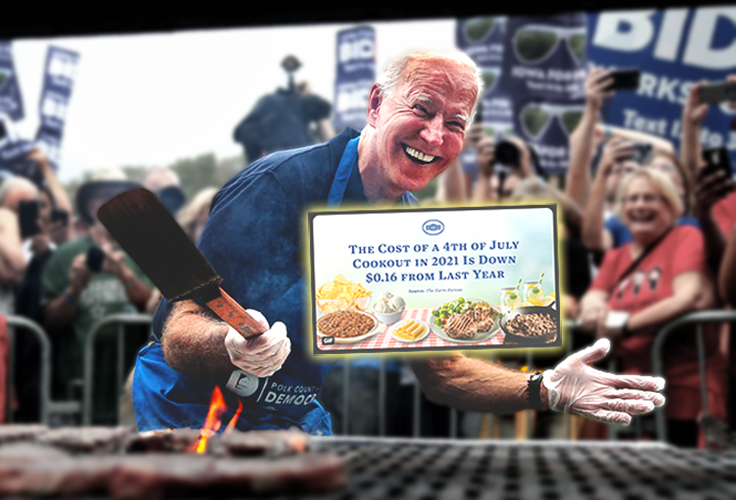 Last year, the White House bragged about saving Americans 16 cents on July 4. This year, prices of a barbecue spread featuring burgers, potato salad, and corn on the cob for Independence Day has shot up $10 thanks to inflation under President Joe Biden.

Fourth of July cookouts will cost 17 percent more than last year, according to the American Farm Bureau Federation. A barbecue for 10 will add up to about $70. The cost of ground beef saw the sharpest increase, with two pounds going up 36 percent from 2021.

“While the cost per person remains relatively low at $7 per person, the increase in the cost of food and supplies is a real concern here in the United States and worldwide,” Farm Bureau president Zippy Duvall said in a statement.

Inflation under Biden reached a 40-year high this year. As a result, the USDA forecasts food prices to increase as much as 20 percent. Americans, including the majority of both Republicans and Democrats, are expressing severe dissatisfaction with the state of the economy, according to a recent AP-NORC poll.

Because supply costs, including fuel and fertilizer prices, have increased, many farmers are earning less money. But most still plan on grilling out.

“Even with the additional cost, my family still plans to fire up the grill this Independence Day,” said Duvall, a third-generation farmer from Georgia. “We’re fortunate in many ways and we don’t take it for granted.”

AI Can’t Be an “Inventor” Under the U.S. Patent Act