A day after the horrific shooting in Uvalde, TX, that took the lives of almost two dozen innocent souls, a former U.S. president tweeted something so insensitive, so upsetting, and so cruel that it defies explanation. It calls into question why he even still has access to the platform, such was the lack of awareness of the sentiment expressed.

As we grieve the children of Uvalde today, we should take time to recognize that two years have passed since the murder of George Floyd under the knee of a police officer. His killing stays with us all to this day, especially those who loved him.

He didn’t stop there. He kept going.

In the aftermath of his murder, a new generation of activists rose up to channel their anguish into organized action, launching a movement to raise awareness of systemic racism and the need for criminal justice and police reform.

Inspired by these young leaders, @MBK_Alliance launched a Reimagining Policing Pledge for mayors and cities ready to take action. If you’re wondering how you can help make things a little better today, here are some ways to get involved:

Oh, were you thinking of a different president? Twitter already removed that guy.

The bigger jerk still has access to his account. He used it to dance on the graves of slaughtered fourth graders today, to advance his political agenda.

This is truly sick. 19 innocent children and 2 hero teachers were killed… and to the Divider-in-Chief, the real victim of Uvalde is George Floyd?

The families of more than 20 people (mostly children) killed yesterday do not deserve this disrespect.

It would be good to respect their pain and not use this moment to stir up more hatred.

The great divider has spoken.

Instead of condolences or taking a moment to reflect on the tragic loss of 19 children (ages 7–10) and 2 teachers; @BarackObama does what he does best, race baiting and vilifying police through his generalization of our officers.

Further rhetoric from the divider-in-chief.

Twitter reacted with the typical division that Barack Obama foments wherever he goes. “What a POS” was trending late Wednesday night: 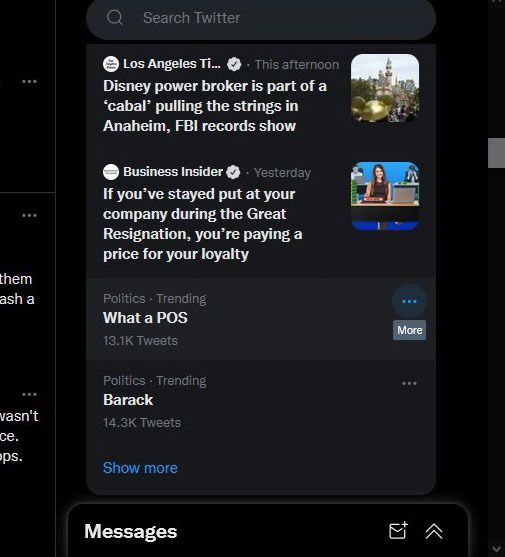 Our pals over at sister site Twitchy noticed:

Here’s a take we did not see coming. We already saw Beto O’Rourke make an ass of himself at a news conference about the school shooting in Uvalde, Texas. O’Rourke at least has a reason; he’s running for governor and thought this would make a good campaign stop. Why Barack Obama chose to insert himself here is bizarre — you’d think he’d be tweeting about gun control, but instead he’s making sure we don’t forget about the anniversary of Geroge Floyd’s death and the need for criminal justice and police reform.

Talk about your mean tweets.

What to Know About Mass Shootings

Companies braced for chaos as Xinjiang import ban starts in US

Weeks after SCOTUS leak on abortion, Biden’s spox says WH doesn’t yet have a...