Gen. Michael Hayden, the former head of the CIA and NSA, believes that you, dear readers, are more dangerous than ISIS, Communist China, and N. Korea — if you’re a Republican, that is. He said so explicitly in a retweet of a comment from Edward Luce, the blue-check assistant editor of the Financial Times, who wrote, “I’ve covered extremism and violent ideologies around the world over my career. Have never come across a political force more nihilistic, dangerous & contemptible than today’s Republicans. Nothing close.”

Nothing close! Not the ISIS jihadis who throw gays from buildings and execute women for flashing a little ankle, not the Chinese with their forced labor camps, not Vladimir Putin whose political enemies slip on bars of soap in the shower and die, not the warlords in Syria who doused their own people with sarin gas, not 9/11 mastermind Osama bin Laden or al-Qaeda terrorists. Republicans are the real danger. “Nothing close.”

Gen. Hayden responded to Luce’s absurd tweet with: “I agree. And I was the CIA Director.” 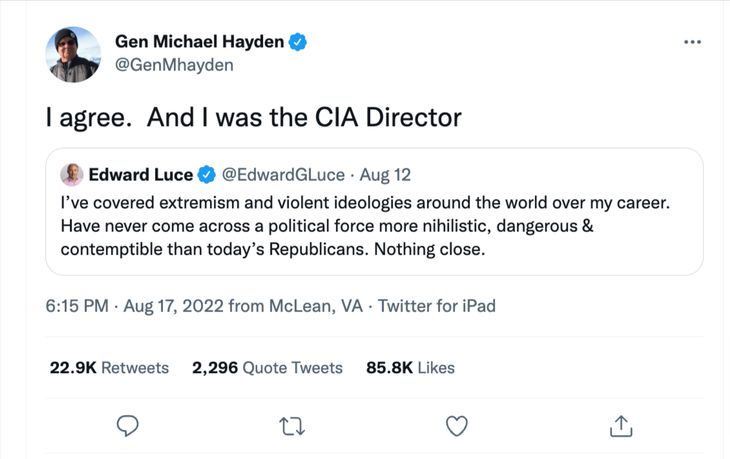 Hayden, you may recall, served as CIA and NSA director under former Presidents Bill Clinton, George W. Bush, and Barack Obama and oversaw the NSA’s controversial warrantless surveillance program. He also signed a letter in the lead-up to the 2020 election, along with dozens of other former Deep State intel officials, claiming that the Hunter Biden laptop story was likely Russian disinformation. It was later proven to be accurate reporting by the New York Post, despite extraordinary efforts by social-media censors to suppress the story.

Recommended: Why Don’t the Twitter Censors Want Anyone Talking About the FBI Raid on Mar-a-Lago?


More recently, the retired Air Force general made a veiled suggestion that former President Trump should be executed after FBI agents “reportedly” recovered nuclear secrets during the raid of his Mar-a-Lago home.

You can be assured that Hayden won’t be banned from Twitter for his disinformation or for calling for Trump’s execution. The Big Tech censors are too busy banning soccer moms complaining about groomers at their kids’ schools and blocking content from conservative websites like PJ Media for asking basic questions about the FBI raid.

We should be worrying about debt as well as inflation