On Monday, the Department of Justice filed a notice that it — oopsie! — took confidential communications between former President Donald Trump and his attorneys when the Biden FBI raided Mar-a-Lago on Aug. 8, 2022. And then, in the next paragraph, the DOJ issued a pronouncement that the Director of National Intelligence (DNI) would also be initiating an “assessment” of the other confiscated documents ripped from Trump’s home — documents Trump claims he’d declassified before he left office.

The Biden Administration U.S. Attorney for the Southern District of Florida said about Trump’s privileged documents that they’d “identified a limited set of materials that potentially contain attorney-client privileged information, completed its review of those materials, and is in the process of following the procedures” that are in the affidavit for a search warrant “to address potential privilege disputes, if any.”

Former federal prosecutor and Trump’s representative to the National Archives Kash Patel addressed the possibility of Biden being allowed to retroactively pierce the executive privilege between a president and his attorney or advisers “with and about communications that President Trump had while he was the sitting president of the United States.” Patel said, “To me, that is — dangerous is putting it mildly…but the effect that has on the president’s and any future president’s ability to conduct the matters of state and national security in confidence has now just been thrown out the window by this, you know, knee jerk reaction because that’s what the radical, Left-wing media wanted from Joe Biden.” Furthermore, he believes it has a deeply corrosive effect on justice. “I think it’s a terrible day for due process,” he said on his podcast. “[This] is a political decision that continues to deteriorate America’s ability to stand on the global stage with any credibility.”

With Monday’s notice, the DOJ bypassed the judge now weighing a special master and announced that the DNI would go through all the documents in a “national assessment” to determine if they think it was okay for Trump to have the documents as a former president. That’s not their job.

So it’s an Intelligence Community Assessment — sounds familiar? Difference between now and December 2016 is that more than half the country knows the score.

If you think that sounds like another investigation into Trump, you win a Joe Biden bicycle helmet.

It’s unclear if the DOJ can initiate an intelligence agency investigation into documents already declassified. The president has the sole authority to declassify. Second-guessing by the DNI seems a bit over the top, to say the least. These moves appear intended to mire the former president in yet another time-sucking, expensive legal goose chase to empty his bank accounts before the next two elections. It looks like a show of naked partisanship by the nation’s top law enforcement agency under Merrick Garland and his DNI counterpart.

The players are all former Obama Administration aparatchiks who may have an interest in recovering documents that are embarrassing or worse, regarding their time at the White House. Perhaps they’re concerned about green-lighting the spying on Trump, knowing that what they accused him of was a phony baloney Russia Collusion hoax made up by his presidential opponent?

America has been rendered impotent, not by our adversaries but by the actions of those who have enjoyed all the benefits the wealthiest nation on earth has to offer @LeeSmithDC pic.twitter.com/BNG1TwNIir

What’s the Matter with Kansas?

We don’t need a backwards crystal ball to know that he’s using the force of his office to keep Trump out of the White House again with another made-up “scandal.”

As Sen. Chuck Schumer said a few years ago, “Let me tell you: You take on the intelligence community — they have six ways from Sunday at getting back at you.”

Related: That Mushroom Cloud You See Is Another Trump Media Narrative Exploding Before Your Eyes

Yeah, we noticed. That’s why a new poll from the Trafalgar group shows that 77% of Republicans and 54% of Independents don’t see upstanding G-men doing their jobs for God and country in the Trump raid; they see political hacks. 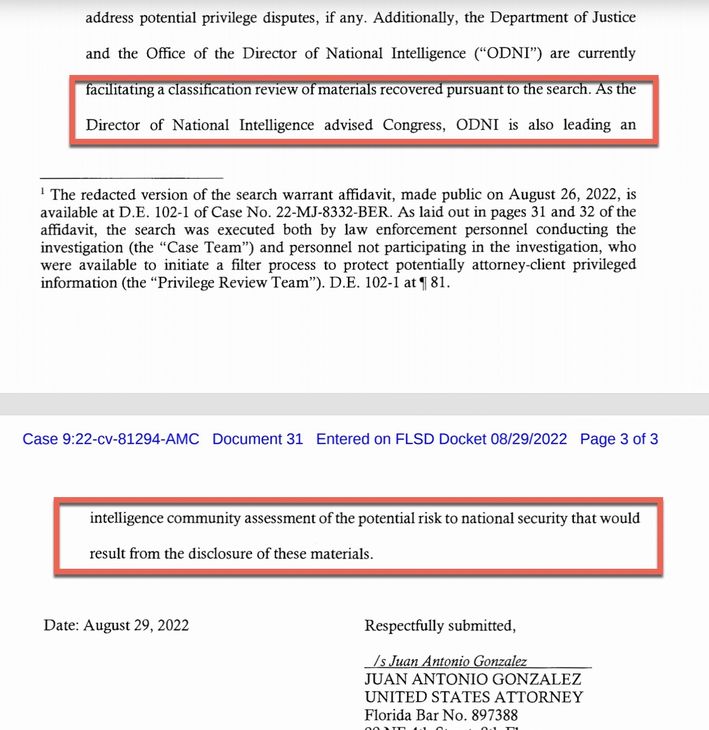 To obtain the raid on Trump’s mansion, Biden was asked to go to the Wayback Machine and remove Trump’s privilege to retain documents. This was after months of negotiations with the 45th president. Similar negotiations with President Obama were resolved after several years. Bill Clinton literally kept nuclear codes in his sock drawer, and guess what? There was no raid on his sock drawer. There was no piercing of his executive privilege by George W. Bush. But Biden allowed NARA’s acting archivist to big-foot Trump, saying “I have therefore decided not to honor the former President’s ‘protective’ claim of privilege.”


Apparently the Left is now going after the very office of the presidency, having destroyed all of America’s other foundational institutions.

And there it is.

The Biden Administration took a National Archives dispute with the last president (which happens with all presidents), elevated it to the White House to blow up the previous president’s privileges (which have been enjoyed by all presidents), parlayed that to a grand jury, and got its subpoena ham sandwich. The Feds then waited until its hand-picked anti-Trump magistrate — not a federal judge — was on the bench and Trump wasn’t home and got the okay for a search warrant for presidential records. Then they dispatched the phalanx of 30 gunned-up FBI raiders, who rifled through the family’s personal items for nine hours to get every document Trump ever touched during his four years in office, trying to find something — anything — on the 45th president. With the documents in their possession, the Feds declined to wait for an actual Article III judge to weigh in on a federal special master to go through the items. They went right ahead and culled through them, lateraled them over to their buddy the DNI, and we now have the intelligence community — which is meant to go after terrorists — playing Monday-morning quarterback on the 45th President of the United States.

There are no coincidences.

Ronald Reagan once said, “Don’t be afraid to see what you see.”

Border Patrol saves baby and toddler who were abandoned in desert

Student Loan Forgiveness, Midterms, and a Farewell to the Soviet Era – RedState