In a statement released on Monday, Donald Trump revealed that the FBI raided his Mar-a-Lago home.

“These are dark times for our Nation, as my beautiful home, Mar-A-Lago in Palm Beach, Florida, is currently under siege, raided, and occupied by a large group of FBI agents,” Trump said. “Nothing like this has ever happened to a President of the United States before. After working and cooperating with the relevant Government agencies, this unannounced raid on my home was not necessary or appropriate.”


Trump believes that the raid, which he called “political persecution,” is part of the Democrats’ plan to weaponize the Justice Department to prevent him from running for president again in 2024, and hurt Republicans in midterm elections in November.

“They even broke into my safe!” Trump said. “It is political targeting at the highest level!” 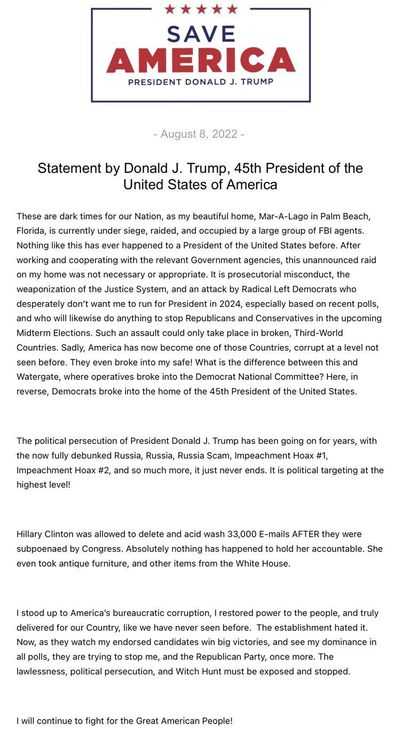 Trump was not done slamming the raid, which he compared to Watergate. “What is the difference between this and Watergate, where operatives broke into the Democrat National Committee?” he asked. “Here, in reverse, Democrats broke into the home of the 45th President of the United States.”

Trump also pointed out the difference between how he is being treated and how his former rival was treated. “Hillary Clinton was allowed to delete and acid wash 33,000 E-mails AFTER they were subpoenaed by Congress. Absolutely nothing has happened to hold her accountable,” Trump pointed out. “She even took antique furniture, and other items from the White House.”

After Disney Doubles Down On Sexualizing Kids, ‘Lightyear’ Falls Short

A raid as consequential as this most certainly had to be approved at the highest levels of the Department of Justice. Attorney General Merrick Garland will have to answer for what is most certainly a gross abuse of power by a Democrat-controlled federal government.

Dana Loesch @DLoesch on the FBI raiding Mar-a-Lago: “This is just nothing more than Democrats trying to settle political scores, like it has been from the very beginning. This is a dangerous game they’re playing.” pic.twitter.com/UAg3COTore

Garland has proven to be one of the most partisan individuals to hold the office. Under Garland’s leadership, the FBI conducted searches of Project Veritas over the alleged theft of Joe Biden’s daughter Ashley’s diary, and threatened states that pass voter integrity laws over bogus allegations of minority voter suppression. Garland has also abused his power to protect Biden and his allies and targets Biden’s enemies whenever possible. He even declined to launch an investigation into COVID-19 nursing home deaths in New York, Pennsylvania, and Michigan, protecting the Democrat governors of those states.

Garland has also shown a grudge against Donald Trump. Not only did he allow disgraced FBI Deputy Director Andrew McCabe to win back his full pension, he also allowed for Donald Trump’s private tax records to be released to Congress despite Congress having no legitimate claim to access them.

Republicans in Congress will most certainly demand answers from Garland on this raid.

This story is developing…

CNN host grills Adam Schiff over motive for not hearing from witnesses who ‘challenge’...