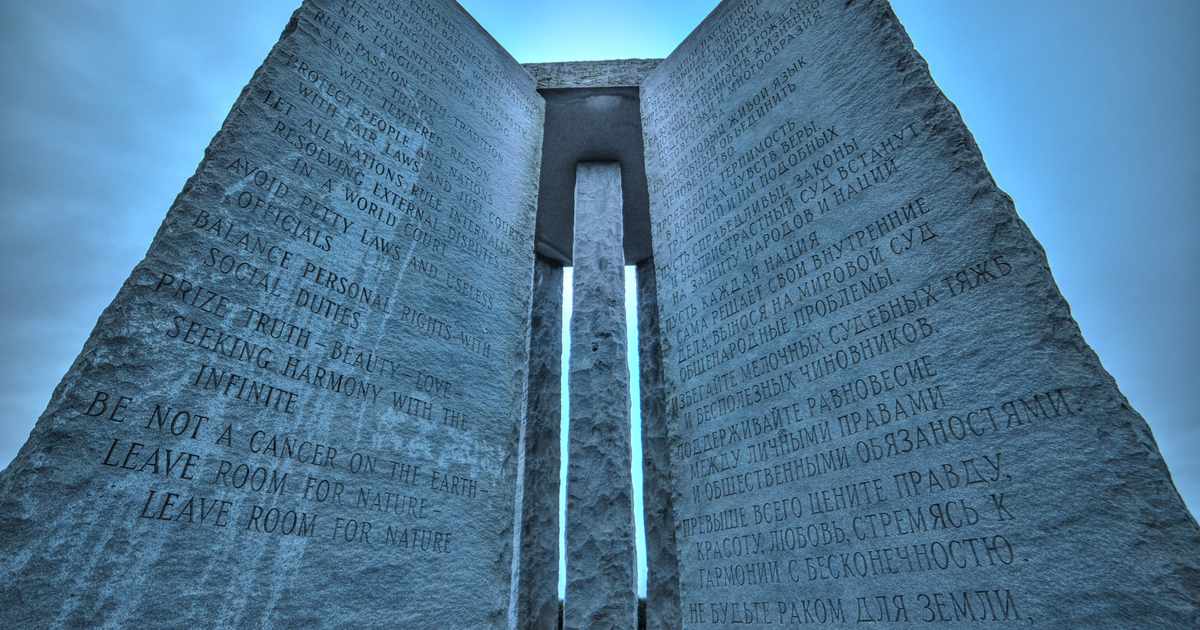 Nobody knows how the Georgia Guidestones arrived in their spot in Elbert County in Northeast Georgia. Someone anonymously commissioned the 19-foot-tall granite monument, which crews erected in 1980. People have called the monument “America’s Stonehenge,” and for over 40 years it has drawn tourists to the site seven miles north of the town of Elberton, Georgia’s granite capital.

But the Georgia Guidestones are no more, and as of now, the circumstances behind their destruction are as mysterious as their origin. On Wednesday morning around 4 a.m., an explosion that reduced part of the monument to rubble took place. Residents reported hearing a boom, and sure enough, the blast destroyed one of the pillars of the Guidestones. Security camera footage shows the explosion and a car driving away from the site.

The Georgia Bureau of Investigation (GBI) launched an investigation on Wednesday. The Georgia Department of Transportation closed Highway 77 temporarily while the GBI and local authorities investigated.

“The preliminary information indicates that unknown individuals detonated an explosive device at around 4:00 a.m. on Wednesday, July 6th,” read a statement from the GBI. “Elbert County Sheriff’s Office personnel responded to discover the explosion destroyed a large portion of the structure.”

The GBI reported later in the evening that the rest of the monument had been demolished “for safety reasons.”

What are — or were — the Georgia Guidestones?

“This monument is a massive granite monument espousing the conservation of mankind and future generations. Sources for the sizable financing of the project choose to remain anonymous,” reads the Elbert County Chamber of Commerce website. “The wording of the message proclaimed on the monument is in 12 languages, including the Archaic languages of Sanscrit, Babylonian Cuneiform, Egyptian Hieroglyphics and Classical Greek, as well as English, Russian, Hebrew, Arabic, Hindi, Chinese, Spanish and Swahili.”

The Guidestones were also as much a magnet for controversy as they were a tourist destination. The left-wing UK news site The Independent tries to paint the image that the Guidestones live rent-free in the heads of “conservative Christians.”

“Conservative Christians sometimes link pagan ritual sites to demonic worship, wrapping all animist religions under the umbrella of ‘demonic,’ the site reports, painting with massively wide brush strokes. “Since then, religious conservatives fearing a ‘new world order’ have cast suspicion and scorn on the monument, both for its likeness and for its message.”

Not exactly, but a handful of conspiracy-minded folks have obsessed with them, including those reliable conspiracy nuts at the History Channel.

One particular conspiracy theorist actually ran for governor in the Georgia Republican primary this year, and she made the Guidestones one of the pillars of her campaign.

Dr. Kandiss Taylor is an educator in South Georgia who ran for Senate in 2020. In her campaign announcement, she hinted that Gov. Brian Kemp was a “sellout.” She finished with 3.42% of the vote in the primary — when even David “Sore Loser” Perdue smokes you, I guess it proves that you’re not a serious candidate.

Another proof that Taylor wasn’t mainstream was her obsession with the Georgia Guidestones and a “Luciferian Cabal” supposedly running the state.

I am the ONLY candidate bold enough to stand up to the Luciferian Cabal.

Elect me Governor of Georgia, and I will bring the Satanic Regime to its knees— and DEMOLISH the Georgia Guidestones.

Join me in my fight to #TearThemDown!

Needless to say, she was excited about the explosion of the Georgia Guidestones.

God is God all by Himself. He can do ANYTHING He wants to do. That includes striking down Satanic Guidestones.

But don’t you worry; she has made it clear that she didn’t have a hand in destroying the Georgia Guidestones. So don’t you DARE accuse her!

Honestly, I don’t believe she would do such a thing.

(By the way, Taylor still hasn’t conceded, despite losing the primary by 70 points.)

Now that the Georgia Guidestones are no more, I guess we’ll never know the real story behind the mystery. But you know what? I’m okay with that because sometimes the legends and conspiracy theories are more interesting than the truth.

If you’ve read this far, thank you. This is a momentous article for me: my one-thousandth article for PJ Media. For almost 12 years, including the last eight-and-a-half months as an editor, I’ve written about breaking news, dug deep into issues, and explored the best and worst of culture. I couldn’t do it without the support of readers like you.


We here at PJ Media are a group of fearless truth-tellers, and sometimes reporting the truth exposes us to the opinion police who disguise themselves as “fact-checkers.” They want nothing more than to shut us down for shedding the light of truth on their false narratives.

But there’s a way you can fight back: by becoming a VIP member. PJ Media VIPs get deeper dives into important issues, podcasts, and an ad-free experience. VIPs also have a heck of a lot of fun.

A PJ Media VIP membership is a tremendous value on its own, but you can use the promo code FIGHTBACK to get an additional 25% off! What are you waiting for? Sign up today!

Politico analysis explains why it appears that Karine Jean-Pierre is reading from a page...