Antonovsky Bridge, one of the Russian Army’s lifelines into occupied Kherson, was effectively knocked out of action in a perfectly timed missile strike — just one of many developments on an explosive day in the Ukraine War.

News service Visegrád 24 tweeted a photo of the burning bridge, reportedly hit by as many as ten missiles:

The Antonivsky bridge near Kherson looks very crisp this morning.

Reports say that up to 10 Ukrainian missiles have hit the bridge. pic.twitter.com/9MMujbyemi

What made the strike so timely was the presence of multiple Russian ammo trucks, headed north with supplies for troops in the Kherson region that Kyiv has vowed to take back. The exploding ammo only added to the destruction.

Antonovsky bridge in Kherson across the Dnieper River after the Ukrainian attack. About 10 trucks loaded with ammunition were driving across the bridge. It’s probably the detonation of one of them. Locals write about the collapse of the bridge span pic.twitter.com/EvnO41zYe9

Whether that was due to luck or extremely actionable intelligence doesn’t matter. The point is that Russia has lost a vital Dnipro River crossing. The Dnipro isn’t just a wide river, making it difficult to ford; it also features the large Kakhovka Reservoir, completely unsuitable for moving the supplies Russia needs.

Exclusively for our VIPs: Who Tried to Murder ‘Putin’s Brain,’ Alexandr Dugin?

Near as I can tell from various maps, Antonovsky Bridge is by far the largest motorway across the Dnipro anywhere in the region.

📹 This is what the Odesa region looks like after the night attacks. Russian troops fired 5 Kalibr missiles
This was reported in Operational Command “Pivden.”
Two missiles were shot down by air defense forces over the sea, pic.twitter.com/YNBgVEpM0w

Two were reportedly shot down by local air defenses. The other three were apparently targeted at an agricultural enterprise and destroyed at least one grain silo.

On the northern front, Kharkiv residents were ordered into air raid shelters Monday night under the threat of Russian attack.

In Russian-held Donetsk, another supply dump is burning and ammo is cooking off.

In Donetsk, an ammunition depot is on fire and continues to detonate. pic.twitter.com/Ud2XR4gAIE

Just making things more difficult for Russia isn’t going to win this for Ukraine. As I’ve written before, if Kyiv wants to end the war on favorable terms, they’re going to have to take back land in places — like Luhansk and Donetsk — where Russia has chosen to concentrate its efforts.


Making the war more difficult and expensive for Russia is not the same as winning.

More frustrating — at least from the perspective of someone who writes about these things for a living — is unconfirmed internet chatter about “large explosions” in or around Sevastopol.

Defense analyst Oliver Alexander reported Monday that Russian Telegram channels are filled with reports of explosions “heard all over the city.”

Curiously though, what we don’t have is any video or photo evidence of the explosions or damage. The Ukraine War is really the First Selfie War, in which soldiers and civilians alike immediately upload anything of interest.

It could be that Sevastopol residents, skittish over other recent attacks, are reporting backfiring cars or the like as enemy action. If that’s the case, it would hardly be a positive indicator of local Russian morale. 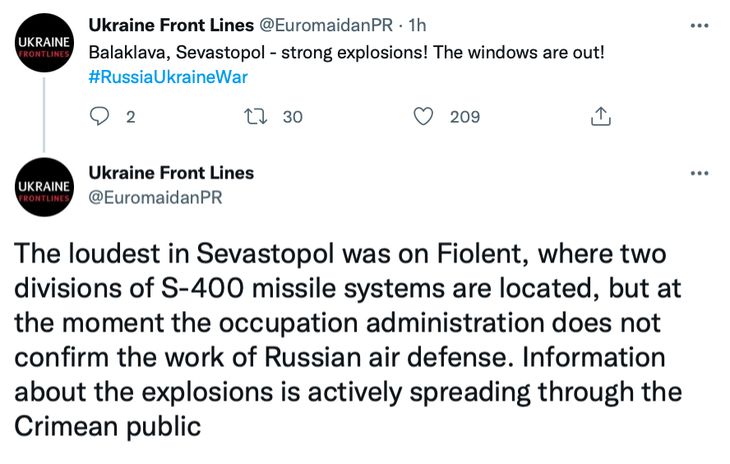 Ukraine in recent days has attempted small drone attacks on targets in Crimea, without much success. So if I had to guess, locals in Sevastopol are probably overreacting to Russian antiaircraft missile launches against more drones.


Or maybe Ukraine scored a big hit and Moscow has managed to censor information coming out of Sevastopol. I’ll keep searching for evidence and update this report as needed.

Recommended: That Insane Obama-Biden Iran Deal Is Getting Worse All the Time

My take from these reports isn’t exactly heartening for either side.

Russian forces seem exhausted and have barely progressed, even under the cover provided by devastating artillery strikes, from their July 3 lines in the Donbas.

On the other side, Ukraine has had some luck in degrading Russia’s already poor logistics. While that’s helpful, Ukraine also seems to lack the manpower or firepower to launch a genuine counteroffensive, even in the less-heavily contested Kherson region.

Autumn rains will come soon, bogging down everything. Then the winter freeze.

If either side is going to make another big push this year, they’re running out of time to make it.

Biden’s Response About 13 Americans Killed in Kabul Attack Shows Just Where His Priorities...