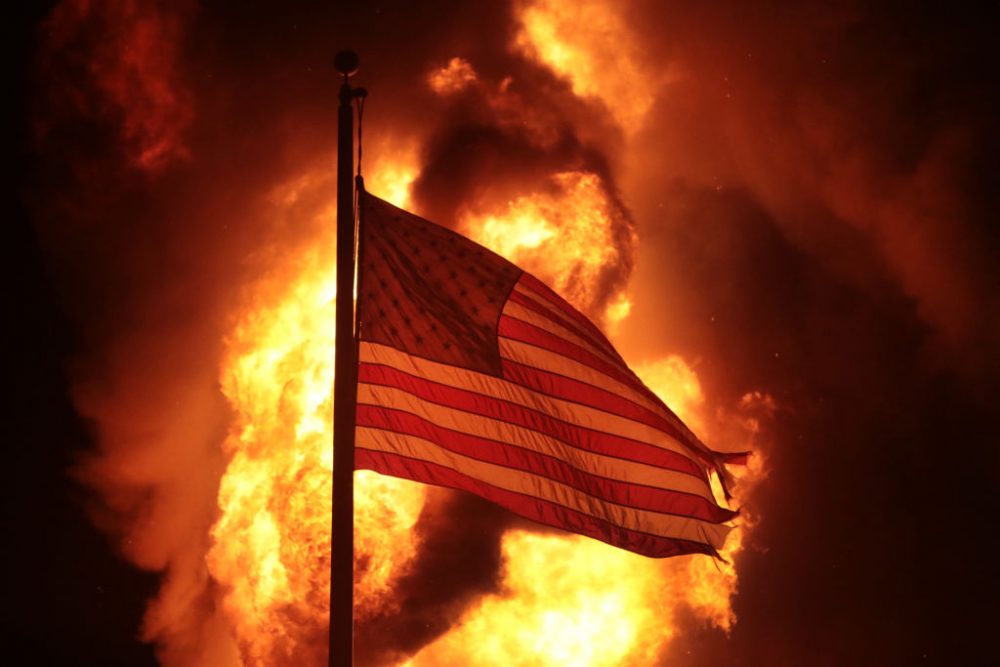 America is headed for the rocks. That’s the takeaway from David Mamet’s latest book, Recessional: The Death of Free Speech and the Cost of a Free Lunch. The book comprises a series of essays conceived over the last two years that serve as a whirlwind tour of the mind of the Pulitzer Prize winner about the sorry state of America and the course we find ourselves on.

As the book’s title implies, Mamet sees our problems as grounded in a rejection of free speech and a mistaken belief in the possibility of a free lunch, where people are owed rewards they haven’t earned by virtue of merely showing up.

Both of these schools of thought, in vogue across education, government, society, and even corporate life, represent a fundamental shift in the plucky traditional spirit of America and Americans. While this transition has been years in the making, in the last two years the chickens have finally come home to roost.

The pandemic created conditions where millions of Americans were willing to abandon their freedom for a small measure of perceived safety. Years of self-flagellation around issues of race and diversity finally boiled over into a summer of deadly riots and protests and cemented a new class of busybody diversity bureaucrats from the ivory tower to Fortune 50 firms. As “Covid hysteria isolated western citizens, under the threat not only of the virus but of government policy,” protests in support of leftist causes were given a pass. The resulting dichotomy made it so that “the only acceptable mode of congregation” was the veneration of the approved idols.

At a time when so much of the oxygen in the room has been diverted to topical culture war skirmishes, Mamet cuts to the quick of the overarching problems we face.

It shouldn’t surprise us that a young person leans left if that student “knows that he will never pay for his years at the theme park” under Democratic rule. It should be no wonder that politicians will destroy our economy—”for example, from draconian measures in the name of health”—when doing so will only serve to increase the power of these politicians at the expense of everyone else. The robber barons buying up what’s left after the lockdowns on the cheap are no different from the robber barons of the 19th century who “amassed the greatest wealth the world had ever seen through stockjobbing, destruction of small industry, and its bargain basement purchases.”

Mamet’s clear-eyed reflection is particularly refreshing after a period where so few seemed to be thinking soundly.

Cowed in fear of a virus of minimal risk to children, blue states sacrificed countless years of education. Worked into a lather by President Trump, Democrats and the media waged a war of misinformation against not just the president but his supporters, running with every sundry Russian accusation no matter how thin the sourcing or dubious the allegation. Bowed by public pressure, global corporations helped bankroll frauds and grifters.

An important premise of Mamet’s worldview is that of left-wing escalation. He blames liberal forces for consistently ratcheting up the tension in our body politic—from cancel culture and destructive riots to the hijacking of the educational system from elementary school through college—and predicts that these trends will continue inexorably.

The only correction left is our Constitution, which Mamet likens to “a recipe in the form of a contract” that citizens and representatives can use to secure the passage of power and prosperity from one generation to another. But this contract exists always at the mercy of those in power, challenged by “those who consider themselves wise enough to disregard it,” and threatened by the “errors we are particularly prone to in times of anxiety” like today.

Mamet doesn’t seem to like our chances. He promises dark things to come, the anarchy of the riots of 2020 as prologue, “the Fort Sumter of the Revolution” knocking at the door to overthrow our constitutional order. What we’ve seen in recent years “can be identified as a nascent totalitarian movement by the accretion of religious rites, observances, miracles, and martyrs.”

It isn’t hard to see how, through the eyes of the paramount playwright of our time, we are gazing into the abyss.

Week 12 of Putin’s War in Ukraine Comes to an End With Fired Russian Generals, New Howitzers, and Little Movement – RedState

But are we, really? Will “the liberals who bowed [these forces] into power … sooner or later, be put against the wall”? Is “Leftist America … following Russia, China, North Korea, Venezuela, and Cuba into slavery,” waiting only on some great dictator to get us there? Are we really “engaged in a great civil war” for the legacy of American freedom?

The blackballing, social ostracization, loss of income, and other professional roadblocks suffered by Mamet and countless others whose views on anything fall to the right of NPR are real and indicative of serious social ills. But Mamet is not Dostoevsky, and while our modern world has seen freedom threatened (and, in some cases, in retreat), it’s worth asking whether his claims can be squared with reality.

Mamet does a powerful job of chronicling the times where small problems are harbingers of doom. But he tiptoes past the moments where, even under similar conditions, the fever eventually breaks.

America’s imminent collapse has often been foretold. Many of Mamet’s supporting points for why America is crumbling would look familiar in previous decades. Were not the riots and political violence of the 1960s, when cities burned and leading politicians and activists were murdered, worse than we’ve seen of late? Weren’t the congressional thugs of the Cold War (Joe McCarthy and Roy Cohn, for instance) more menacing and power-drunk than the Democrats of today?

Yet even these periods were followed not by desolation but abundance—more freedom, more domestic tranquility, rising economic conditions. When all the cultural and political signs pointed to an approaching cliff, one never came. America righted the ship.

Mamet nods to this uncertainty late in the book, asking rhetorically, “who is wise enough to understand, let alone to change the time in which he lives?”

All nonfiction writing (particularly prognostication) must tilt at the elusive windmill of the truth in our time. Some get it right; perhaps Mamet’s latest entry will be understood as one of these. But perhaps his darker predictions—like so many other end times prophecies—will end with believers sheepishly trying to walk back down from the hill when the appointed time never came, or at least claiming their own personal transformation as a consolation prize.

Recessional: The Death of Free Speech and the Cost of a Free Lunch
by David Mamet
Broadside Books, 240 pp., $28.99

What’s Behind the Unrest in Peru?