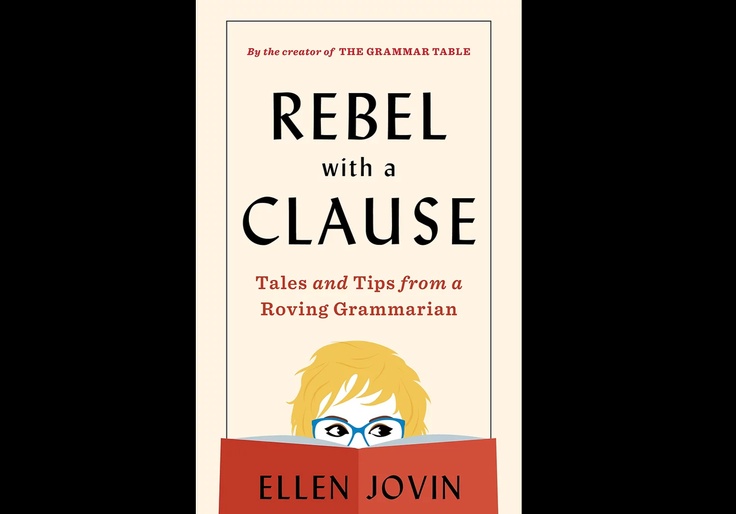 In September 2018, the linguist Ellen Jovin set up a table near an exit to the 72nd Street and Broadway subway station in New York City and invited passersby to ask her questions about grammar. Her first query, she writes in Rebel with a Clause, was a nasty “spousal apostrophe dispute.” Most people would have folded up their table and headed indoors after that, but Jovin and her husband Brandt took the show on the road. By now, they may have sparked spousal apostrophe disputes in Hawaii, Alaska, and Connecticut, too.

Rebel with a Clause is a useful primer in the parameters of correct usage, but it is also a state-of-the-nation report on the use of American English. Jovin noticed that, despite the divisions of politics, questions of language bring people together in civil and enjoyable exchanges. She also noticed that they have an awful lot of questions. Never mind heavy-duty stuff like direct objects, appositives, and the best way to use a semicolon. Most of her clients struggle with the basic stuff and are often embarrassed by their uncertainty.

Wittgenstein wrote that “the limits of my language mean the limits of my world.” To be limited in language is to be limited in the world, for language is an invisible net, cast between us and the world. When the net is torn or gaping, words and things come apart; like Hamlet, we find our sense of ourselves is heightened yet dissatisfactory. Fixing the net repairs the torn fabric of reality and allows us to cast it wider. A resolved query, Jovin noticed, produces a “therapeutic calm,” and also greater social confidence.

In Boulder, Colo., she soothes a traumatized survivor of sixth-grade sentence diagramming. In West Virginia, Gary is 45 years out of high school, doesn’t know what an adjective, a conjunction, or a pronoun is, and doesn’t much care. Meanwhile, Gale from Red Cloud, Neb., reminisces with delight about the Friday afternoon grammar games her eighth-grade teacher set for the class, and chats about “linking verbs” (“I feel hungry”) and prepositional phrases (“of the people,” “across the street”).

Teachers no longer pay such close attention to errors in grammar and spelling. Instead, they leave it to the spellchecker. Jovin’s fieldwork confirms that teachers, by failing to teach the basics, are making millions of us look foolish. Hal, a businessman in Decatur, Ala., confuses “accept” and “except.” Tara in Venice Beach confuses “affect” and “effect.” No one seems to know the difference between “further” and “farther.” And then there is the morass of confusion and rage that is the lie/lay distinction.

Present: I lay Jo and she lays the book down. As Jo lies down, she lies to me.
Past: When she lay down, Jo laid the book down. She lay there, and she lied to me as I laid her.

No wonder people are confused. Merriam-Webster doesn’t care much for the further/farther distinction, either. Nor does our most popular dictionary help users as they struggle with foreign words. Rather than educating users in the use of the cedilla and the tilde, Merriam-Webster encourages confusion by allowing “facade” for “façade,” and “pinata” for “piñata,” even though “façade” with a hard “c” may give offense (“fuckade”) and “piñata” without a tilde will make you look stupid. The latter is worse.

Native English-speakers everywhere struggle with foreign words, because if you speak English, you can always refuse to learn anyone else’s language. In America, this struggle took on a patriotic dimension, so I doubt anything can be done about it now. Noah Webster intended his dictionary to sever American English from the Old World, and his assault on etymology worked. American English was cut off from its roots, and therefore developed freely; American English cannot explain itself in the same way as the other Englishes (and they include the English of India, Canada, Australia, New Zealand, and South Africa).

Webster introduced what linguists call “false friends,” for instance implying that a pedophile is someone with an illicit passion for bicycle pedals. Given that the official architecture of the new Athens drew on Greek precedent, this was oddly philistine. His attack on French etymology, and its deeper Latin roots, also lumbered his compatriots with needless distinctions between “canceling” and “cancelling,” “traveled” and “travelled,” and consequent embarrassment over which is right. (Both, according to the American Heritage Dictionary; “cancelling” and “travelled,” according to the rest of the world.) Why call it “tendinitis” when the pain isn’t in your tendin? Then again, if we all say sherbert, why stick with the Turkish and Persian origin sharbut, and write sherbet?

Kara from Martha’s Vineyard took this disorder as a license to name her daughter “Pammella.” When Pammella complains—and she complains quite a lot, because no one can pronounce her name correctly—Kara says two words: “Scarlet Johansson.” But Pammella’s forename comes from Greek via English (meli means “honey” in Greek), and Scarlet’s surname is Germanic. Would Baywatch still have been a hit if its female star had been Pammella Andersson? Perhaps; none of us stumbles over David Hasselhoff’s surname. Shakespeare did a bang-up job without standardized spelling. Scandinavian headbangers laugh at the daft umlauts in the name of Motörhead, and the name of Tommy Lee’s band, Mötley Crüe, is more ingenious than any of their tunes. Read it as it’s written, and it’s pronounced “Mertley Crerr.”

In conversation, functionality matters most of all. On the page, however, functionality means grammatical discipline. Nothing divides people as badly as the Oxford comma does. Named for the house style of Oxford University Press, it is also known as the serial comma, and is inserted before the final item on a list or before “or.” The Chicago Manual of Style considers it mandatory; a typical example of how American English retains 18th-century habits that British English often abandons (in England, only waiters call you Ma’am and Sir). But the Associated Press Stylebook, which defines much newspaper usage, advises using it only for clarity. This is not much use at all, because clarity is often subjective.

The Oxford comma, Jovin writes, is “one of the emotional hot-button issues of our time,” probably because it clarifies more than grammar. In North Dakota, a woman says she was called a “coastal elite” for talking about the Oxford comma. Bethany, a librarian in Flagstaff, Ariz., confesses to a “lifelong attraction” to it, Charles in Salt Lake City admits to defending its honor in a “knock-down, drag-out fight” with a friend, and Samuel in Chicago was fired from his job as a copywriter for defending it, but a rapper in Bozeman, Mont., says “do away with it completely so there’s no confusion.” He means confusion about whether to use it, not confusion about how to use it. The O.C. may not be pretty, and, as the rapper may have noticed, it can restrict the rhythmic options in your phrasing and make a sentence land too heavily, but sometimes it is essential:

Jovin says no. This is not a list, but a sequence of independent clauses (groups of words that can stand alone as sentences). But rules will only carry you so far. Appositives (substitutes) come in restrictive (with commas) and nonrestrictive (without commas) forms:

In Sante Fe, Jovin finds that an appositive and Oxford comma, the belt and braces of the grammarian, can work against each other:

I invited my mother, my first Spanish teacher, and my sister.

Is her mother also her first Spanish teacher? Is she inviting two people or three? Those of us who were schooled to avoid the Oxford comma where possible would have no trouble here:

I invited my mother, my first Spanish teacher and my sister.

The same goes for what Jovin calls “weird plurals.” At school in England, I learned (learnt?) that the Latinate nouns “media” and “data” are the plurals of “medium” and “datum,” so they take plural verbs: The media are lying to us. But in the United States, the media is lying and their data is faulty. Then again, as Jovin says—and this had never occurred to me—no one in Britain says, “These spaghetti are delicious.” In England, Manchester United, being a sports team, are overrated, while in the United States it is overrated. But a collective noun like the armed services take plural verbs in both the U.S. and U.K.: The armed services are beset by political correctness. And no one anywhere, and certainly not Merriam-Webster, knows whether the plural of mongoose is mongooses or mongeese. The latter, obviously.

The only solutions are to learn lists of irregular usages, or, as Jovin recommends, to allow all usages. I would argue that asking children to memorize irregular usages may seem snobby, but not telling them how their variant usages will be perceived turns correct usage into a class marker. The credentialed doctor talks of a bacterium, while the patient talks of a single bacteria. The credentialed nuclear scientist talks of noo-cle-ar weapons, while the man with the nuclear football, at least in George W. Bush’s case, talks of the nucular option.

That said, Jovin’s arguments for free usage are invariably practical and generally reasonable, especially when it comes to speech. You are free to begin a sentence with “because.” Why? Because sometimes it works. You can use “whose” as the possessive form for inanimate objects, as in “a pickup truck from whose bed a friendly woman was selling corn.” Why? Because English has no separate possessive form for “which,” and because if “whose” was an acceptable substitute for Ralph Ellison, F. Scott Fitzgerald, Virginia Woolf, and Evelyn Waugh, then it’s good enough for the rest of us.

Custom changes the rules of grammar. Not long ago, it was wrong to use “they” if the antecedent (the noun or pronoun it refers to) was singular. Today, “they” is accepted colloquially and increasingly in print as an effective alternative to “he or she.” This breach of grammatical logic rarely confuses the reader. But a more recent twist, the multiplication of gender identities, can easily confuse the reader. Imagine a novel without he’s or she’s, in which every character is a they. It wouldn’t work.

We are forced to boldly go our own ways. Jovin provides examples and quizzes to establish the minimal rules, and she also shows how you can be spontaneous or casual without slipping into error. Her travels are a compassionate guide to the daily difficulties of communication and the unnecessary stumbling blocks that we create by not doing our homework. Her solutions are compassionate, too. Jovin advises that we remember our manners as well as our grammar.

Jovin recommends that we never correct other people’s usage (a habit colloquially denominated by the compound noun, part of which is a proper noun, “grammar Nazi”). You can reply to “How are you doing?” with either “I’m doing good” or “I’m well,” but saying “thank you” after either is probably more important. And don’t use texting slang to people over the age of 30 and other geriatrics. Reading Rebel with a Clause will certainly make you a better writer and speaker. It may also make you a better person.

Rebel with a Clause: Tales and Tips from a Roving Grammarian
by Ellen Jovin
Mariner Books, 400 pp., $26.99

Dominic Green is a fellow of the Royal Historical Society and the Foreign Policy Research Institute. His latest book is The Religious Revolution: The Birth of Modern Spirituality, 1848-1898.

Why Does The NEA Want Kids To Learn Butthole-Licking?

In Speech Walkback, Biden Admits He’s The Threat To Democracy