The Bank of England will need to raise interest rates to 2.5 per cent and keep them there until the middle of the decade in order to bring soaring inflation under control, according to a leading think-tank.

The BoE’s monetary policy committee report released last week suggested that 2.5 per cent rates would lead to inflation undershooting its 2 per cent target, heavily implying that price stability could be achieved without raising rates to this level.

But according to Stephen Millard, deputy director at the National Institute of Economic and Social Research think-tank that produced the forecast, the BoE could be overestimating how far demand headwinds will curb inflation.

“We expect inflation to come down fairly quickly, and so do the bank, but on higher interest rates than are in the BoE forecasts,” said Millard at a press conference presenting NIESR’s research.

Last week the bank announced an increase to its base interest rate of 0.25 percentage points, lifting it to 1 per cent, after inflation hit a fresh 30-year high of 7 per cent in March.

NIESR forecast inflation peaking at 8.3 per cent, lower than the central bank’s prediction that price rises would pass 10 per cent this year.

Despite the projection that higher rates would be necessary to contain inflation, NIESR said the central bank would have to navigate carefully the “treacherous waters” caused by a tension between “allowing inflation expectations to anchor and . . . plunging the economy into a deep recession”. 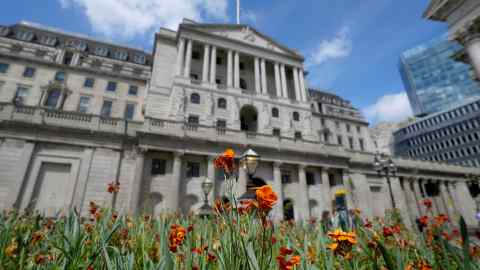 Millard acknowledged that the deep uncertainty facing the UK economy because of the impact of the war in Ukraine and a squeeze on lower real incomes, made any assumptions regarding future growth less than ironclad.

“Since we closed the forecast we had results which indicate that consumer confidence has plummeted quite a bit. This might be associated with a rise in precautionary saving” which could mean that “consumption isn’t going to be as strong as we predict”.

Millard cautioned that any predictions of strengthening household consumption should not be taken as an indication that all would be able to weather falling incomes.

“While we expect consumption to grow overall due to households using their pandemic savings, aggregates can hide what’s happening at the disaggregate level,” he said.

Adrian Pabst, a deputy director at NIESR, added that the current real-income squeeze was due to hit poorer households the hardest. “As you move down the income deciles, food and energy bills are going to be taking up a lot of real disposable income,” he noted.

According to Pabst, around 1.5mn of the hardest-hit households are due to face food and energy bills “greater than their disposable income”. He said that their predicament required the government to respond in the form of targeted fiscal assistance.

Devin Nunes Derides Twitter As A Potemkin Village Of Bots

Get Ready for the Return of the Abortion Novel

‘Different from the US’: why Japan does not worry about inflation