Bank of England governor Andrew Bailey has raised the possibility of increasing interest rates by half a percentage point in early August as he toughened the central bank’s language on battling rising prices.

Bailey said the central bank’s Monetary Policy Committee had an “absolute priority” to bring inflation back down to its 2 per cent target and faced the “largest challenge” to inflation control since the bank gained independence on setting interest rates in 1997.

With June inflation figures likely to rise to another 40-year high of at least 9.3 per cent on Wednesday, Bailey set out the policy options under consideration by the MPC.

A half-percentage-point interest rate rise would be the largest increase since 1995. The governor also raised the BoE’s thinking for the first time on selling some of the assets it bought under rounds of quantitative easing since 2009.

“In simple terms this means that a 50 basis point increase will be among the choices on the table when we next meet,” Bailey told an audience of financial and business leaders at the annual Mansion House dinner in the City of London.

Financial markets increasingly expect the European Central Bank to increase its main interest rates also by half a percentage point on Thursday.

Bailey said there was no guarantee a UK increase would be that large, adding that the committee would have to take into account the easing of global supply chain bottlenecks as well as higher gas, food and fuel prices following Russia’s invasion of Ukraine.

“We have been clear that we see the balance of risks to inflation as on the upside,” Bailey said.

The governor acknowledged that interest rate rises would come at a time when people in the UK were becoming poorer and struggling over accessing basic necessities, saying the BoE had already taken this into account when it set monetary policy.

Regarding the sale of assets, Bailey set out quite an aggressive timetable for bringing down the level of government bonds it had bought, which peaked at £895bn.

“Based on analysis conducted in conjunction with colleagues at the debt management office, we are currently looking at a total reduction in the stock of gilts held . . . in the region of £50bn‐£100bn in the first year,” Bailey said.

While the governor admitted challenges in battling inflation, chancellor Nadhim Zahawi threw a protective arm around the BoE, saying it had “a strong track record” on price control and had all the tools it needed to succeed.

The bank has faced criticism from Tory leadership contenders, including foreign secretary Liz Truss, who said she would tighten ministerial scrutiny of its activities if she became prime minister.

Meanwhile, Zahawi confirmed the government was considering taking powers to “intervene in financial regulation in the public interest”, a plan that has infuriated Bailey, who wants to preserve regulatory independence.

But Zahawi said the government would look at all the arguments before coming to a decision; the move is so controversial that any change to the rules will be left until September when a prime minister will be appointed and, possibly, a new chancellor.

The “call in” power, which is supported by Sunak, will not feature in the financial services bill to be published on Wednesday but could be added if he becomes prime minister. 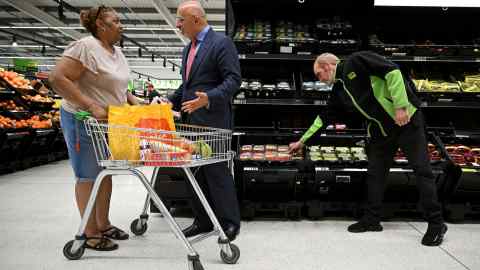 Zahawi also flagged the importance of reforms to Solvency II rules to allow UK insurers to invest more in infrastructure alongside other reforms to London’s capital markets to make it easier for companies to raise money.

On Tuesday, the Treasury published the results of a review of the fundraising market by Freshfields’ lawyer Mark Austin, which recommended regulatory changes to increase the ability of companies to raise funds quickly and cheaply, and ensure greater involvement of retail investors.

In response, the Financial Conduct Authority said this aligned with its “strategic priority to ensure UK wholesale markets continued to be regarded as one of the leading global markets of choice for issuers, intermediaries and investors by identifying ways to streamline further capital raising by publicly traded companies and promote access for investors”.

No easy answers to protect the UK from soaring energy costs

Man allegedly raped and brutalized his social worker for 15 hours until police saved...

Who Are You Calling A Fascist, Mr. President?