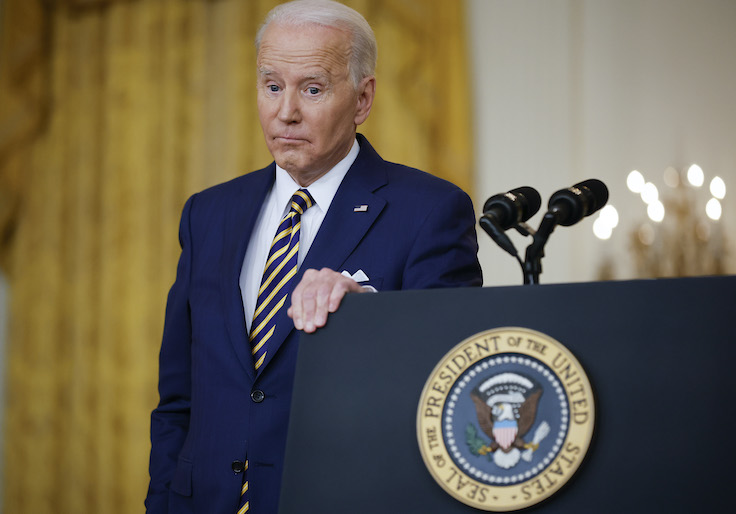 On the campaign trail, President Joe Biden pledged to restore “respected leadership on the world stage.” Now, a year and a half into his presidency, an overwhelming majority of voters in four swing House districts say he’s done the opposite.

Eighty-five percent of registered voters across four critical swing districts say “America’s standing and reputation in the world is getting weaker,” according to a Republican Main Street Partnership poll obtained by the Washington Free Beacon. Biden argued he would do just the opposite during his campaign—in a 2020 Foreign Affairs essay, for example, the Democrat wrote that, if elected, he would restore the “credibility and influence of the United States in the world” and “once more have America lead” on the global stage. He went on to declare just one month into his presidency that “America is back.”

Roughly a year and a half later, however, Biden’s tenure has been marked with repeated foreign policy blunders. In August 2021, the Democrat’s botched Afghanistan withdrawal led to the deaths of 13 U.S. servicemen at the hands of an Islamic State suicide bomber, marking the deadliest day for U.S. troops in the country since 2011. Months later, Biden’s attempts to deter Russian president Vladimir Putin from invading Ukraine failed, sparking a deadly war that has cost Americans tens of billions of dollars.

That agenda pledges to be “strong enough to be a deterrent to the bullies of the world such as Russia, China, North Korea, and Iran,” in part by restoring American energy independence. Under former president Donald Trump, the United States became a net annual petroleum exporter for the first time in more than 70 years. But under Biden, the United States is again becoming a net oil importer, a reality that Republican Main Street Partnership members argue emboldens hostile, energy-dominant regimes such as Putin’s Russia.

“Let’s get back to energy independence and lead the world,” Rep. Pete Stauber (R., Minn.) said during the partnership’s internal agenda briefing on Friday.

Those findings have Republicans bullish that they can win a House majority in November—a majority that the partnership’s members say they will use to prioritize “common-sense conservative solutions.” In addition to the group’s call to “increase domestic production of oil and natural gas,” the partnership’s newly unveiled agenda pledges to cut spending and pass “strict guidelines to hold district attorneys and prosecutors accountable.”

“We have developed a plan full of proven, common-sense, and conservative solutions that are supported by the American people,” Rep. Mike Bost (R., Ill.) said in a statement. “We are fighting for real results that get our country back on track.”

The White House did not return a request for comment.

A Stroll Through The Times Square Gun Free Zone

Environmental Anxiety vs. the Constitution

We should worry about price of food more than petrol, warns BlackRock’s Fink