“The overdose epidemic is taking one New Yorker from us every four hours,” New York City Health Commissioner Dr. Ashwin Vasan said in April. It has become “a public health crisis,” he continued, and his agency is focused on “reducing overdose deaths through evidence-based strategies.” One of those strategies, it appears, is a public-relations campaign that borrows the postmodern language of self-actualization to such an extent that it actually encourages the use of illicit opioids and opiates.

The city has embarked on an effort to raise awareness around the risks posed by the deadly synthetic opioid Fentanyl, which (the public-relations campaign warns) can be found not only in related street drugs such as heroin but in “cocaine and pills, too.” Nothing wrong with that. Nor would anyone object to this campaign’s promotion of lifesaving medicines such as opioid blockers. But in one advertisement in this campaign, which was recently flagged by City Council Minority Leader Joe Borelli, the distinction between preventing and outright promoting the use of illicit narcotics is blurred beyond recognition.

“Don’t be ashamed you are using,” the ad reads, “be empowered that you are using safely.” The text of these ads warns of the dangers of doing Fentanyl, but it also provides helpful tips for heroin users ostensibly designed to reduce overdose deaths. “Avoid using alone and take turns,” it advises. “Start with a small dose and go slowly.”

This advertisement operates under the delusional assumption that there are best practices when partaking in drugs like heroin. There is no such thing. The public health crisis for which these drugs are responsible can be curtailed only through the overall reduction of their use, not the promotion of allegedly “safe” practices. In that sense, this ad campaign isn’t only morally indefensible, it’s wildly impractical.

New York City recently opened its first “safe injection site,” which is entirely oxymoronic. These “overdose prevention centers” are designed to allow New Yorkers to safely circumvent federal, state, and city laws. Drug use at these sites is overseen by professionals who also supply opioid antagonists such as Naloxone. The best thing you could say about this approach is that, in theory, it will reduce overdoses among the addicts who choose the sites. That population, however, is likely to be a fraction of the city’s drug users, and those who take advantage of the sites will not do so regularly. The second-best thing—indeed, the only convincing case that can be made for the sites—is that they allow social workers captive access to the addicted population to provide them with a way out of their waking nightmare. A city-wide campaign advertising how “empowering” it is to use these drugs defeats that purpose.

Opioids and opiates, synthetic or otherwise, consign their users to a living hell. There is nothing less empowering than heroin addiction. Even suggesting that a measure of self-fulfillment can be found in opioid abuse is an abdication of the city’s responsibility to its citizens, both those who use these drugs and those who don’t. Because unlike with many other illicit narcotics, addiction to heroin, morphine, prescription painkillers, and similar substances is not just a personal choice that is experienced by the user alone. Those who struggle (the operative word) with addiction to these drugs externalize their experience. It is shared by their friends, family, and community, as anyone who has had extended contact with a sufferer will attest. The addict’s ordeal is not theirs alone; it is all too often collective, and it tears the bonds of community apart.

“The stigma of addiction” has recently become a source of consternation among medical professionals and social workers who deal regularly with the afflicted. They lament society’s belief that drug abuse constitutes a “moral failing” because that assumption leads those who suffer from addiction to avoid getting the help they need. Surely, there’s merit to this assertion. But that stigma is a function of human nature. It is a social survival mechanism aimed at discouraging its members from making themselves into menaces, wards of the state, and sources of constant anxiety for their friends and loved ones. That’s what these drugs do to you. They trap their users in a purgatorial state of living death. Facilitating that condition in any way is the opposite of compassion.

Using the pop-psychological language of self-realization and empowerment to describe a substance that disempowers its users, steals from them any inner peace, and alienates them from the real support structures in their lives is a cruel joke. The flouting of the law that this PR campaign and safe sites encourage renders the state an engine of hypocrisy. Giving people a license to kill themselves somewhat more slowly and with proper medical oversight is no less a moral atrocity.

You can support the decriminalization or even the legalization of some or even all schedule drugs while also recognizing that the promotion of their use is bad public policy and unethical depravity—one in which the law-abiding citizens of New York are now complicit as their tax dollars fund this crusade. Opioids and opiates are particularly special cases. Any public effort to reduce the harms of these drugs must first discourage the use of non-prescribed narcotics. Genuine compassion for those tormented by addiction and the people caught in their orbits, who are no less burdened, would center on an effort to deliver these people from the prison their lives have become. New York City, it seems, has decided instead to build more cells. 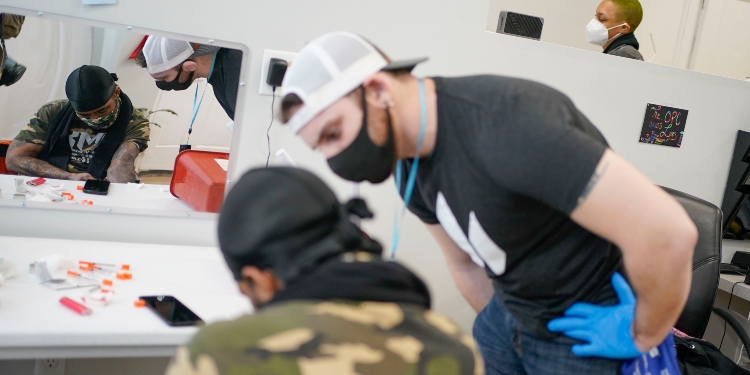 Johnny Depp Might Have Won His Court Case, But He’s Still No Hero