The question is, as ever, “compared to what?” Given recent polling that indicates only about a quarter of Democrats want to see Joe Biden on the ballot again in 2024, we can conclude that Democrats aren’t asking themselves this question. The alternative to Joe Biden running again is chaos. A divisive, damaging primary fight culminating in the ascension of Kamala Harris to the nomination—a spectacularly maladroit politician who is somehow less popular than the very unpopular president—is the likeliest outcome. Only the renomination of Donald Trump by Republican primary voters could salvage Democratic prospects in that event. And, if the polling is to be believed, it is also the likeliest course of events. The casual political observer could be forgiven for concluding that we have offended a vengeful God and are consigned to suffering.

Recently, though, a shiny object has captured the attention of the American press corps. While it may yet prove a mere distraction, the burgeoning public feud between the governors of California and Florida is no petty squabble. What is, on its face, a contest between two competing personalities and their views on the cultural flashpoint of the moment is also a profoundly healthy debate over competing models of American social organization.

“Freedom is under attack in your state,” California Gov. Gavin Newsom warned Floridians in a television commercial he aired in the Sunshine State earlier this month. From the state’s legislative efforts to ban elective abortion in the second trimester, to extirpating critical race theory from the study of elementary arithmetic, to prohibiting sexual education before grade three, Newsom alleged that Tallahassee is waging a war on liberty. “I urge all of you living in Florida to join the fight,” he said, “or join us in California, where we still believe in freedom: freedom of speech, freedom to choose freedom from hate, and the freedom to love. Don’t let them take your freedom.”

This salvo across Florida’s bow was occasioned by a personal affront from its Republican governor, Ron DeSantis. “He did something that tipped me very directly, and that was going after the Special Olympics,” the California governor told local reporters. And he accused DeSantis of “bullying.” “I had an emotional response to that,” Newsome said, adding that this insult “was the determination on the ad.”

Despite his best efforts to make this feud sound petty and personal, there is a fascinating administrative dimension to it. DeSantis did, in fact, threaten to impose a fine on the Special Olympics International for imposing a Covid-19 vaccine mandate on its athletes. The threat alone led the organization to relax their standards, which led to the increased participation of hundreds more special needs athletes. DeSantis’s threat produced an outcome that few could argue against without sounding callous towards the disabled. And in going after DeSantis for it, Newsom gave Florida’s governor the opportunity to contrast his state’s model with the alternative presented by California.

“When families are uprooting from the Pacific coast to go almost three thousand miles in search of a  better life, that’s telling you something,” DeSantis said of the more than 360,000 Californians who fled their state last year alone. “California is driving people away with their terrible governance.” Despite the Golden State’s natural advantages, its wealth, and its vast stores of human capital, California is “hemorrhaging population.”

This contest, if we should be so fortunate to be privy to it, would be beneficial to America’s civic consciousness. A debate over the theories of social organization being tested at the state level is exactly what the Founders intended for us.

Those on the California side of the debate will emphasize the Florida governor’s cultural crusaderism (as though California doesn’t engage in its share of social engineering). And it is true that being so finely attuned to the grievances of the online right has led the Sunshine state into a few cul-de-sacs (sorry, a state legislature cannot compel Twitter to let Donald Trump tweet). But its population is growing, its taxation and energy policies are reasonable and predictable, and its investment climate is attractive. Conservatives should be spoiling for a fight that pits Florida against the Blue State model represented by California.

Violent crime in California is rising. Its homeless population, many of whom are in desperate need of assistance to escape their conditions, is expanding because the state has opted instead to make their homelessness more comfortable. Its schools were failing at a rate higher than anywhere else in the nation even before the pandemic. It has sought to write racial and ethnic discrimination into its constitution, and it would have succeeded had the state’s voters not revolted. And its myopic green-energy policies ensure that state residents cannot depend on an uninterrupted flow of electricity to homes and businesses.

Joe Biden has attempted to impose some of California’s experiments on the rest of the nation, ensuring that the Newsom-DeSantis feud is no academic exercise. He has advocated legislation modeled after a California bill that would have decimated the so-called sharing economy in order to artificially inflate the rolls of labor unions (Californians rejected that one, too). In restoring California’s ability to set its own stringent emissions standards for automobiles, Biden held up the Golden State as an environmental model to which we should all aspire. “California, you’ve got to keep Gavin Newsom as governor and send a message to the nation that we have to deal with the climate crisis now,” Biden insisted.

Even if the complex sequence of events that would produce a national contest between Newsom and DeSantis fails to materialize, the feud remains valuable. We are being treated to a debate over two distinct theories of governance cleverly disguised as a clash between two incompatible personalities. It has been 10 years since a state’s chief executive has submitted his record in office to the public for an up or down referendum. Personality has taken on an outsize role in the process of choosing a president, and we’ve gotten the governance we deserve. It’s high time we return to fundamentals. And if two prickly personas can trick the public into engaging in a debate over models of actual governance once more, the country is likely to be better off for it. 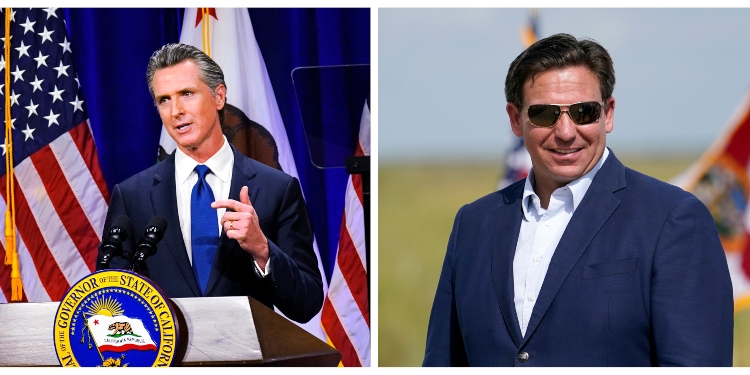 Biden’s Furious Debate with Himself Over Ukraine